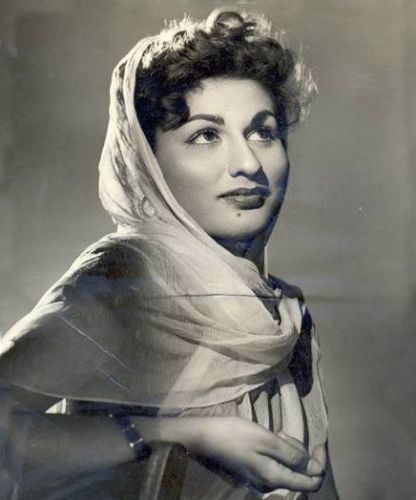 Born on 25 December, 1926 in Jhelum, her father Miyan Ehsan-Ul-Haq, who originally hailed from Jalandhar, was a judge. He eventually retired from the post of Chief Justice from Rajasthan. During her growing years, as her father would get posted in the various princely states of undivided India, Begum Para was admitted to a hostel in Aligarh in order for her studies to continue uninterrupted by frequent transfers. She completed her education up till standard 12.

Her family was open-minded and liberal. When her brother, who worked with Bata in Calcutta, expressed his wish to marry Bengali actress Protima Dasgupta, there was no opposition from his father. The newlywed couple moved to Bombay shortly and Dasgupta went on to play the main lead in Kardar’s film Namaste (1943). When Begum Para came down to Bombay to stay with her brother and sister-in-law during her school vacations, she also came in contact with a few members of the film fraternity. Soon, she was offered the lead role in the Pune-based Prabhat Pictures’ Chand (1944) by Baburao Painter, who was one of the partners of Prabhat Pictures. Directed by D D Kashyap, Chand saw Begum Para star opposite Prem Adib, with popular kathak dancer Sitara Devi also essaying a key role in the film.

Incidentally, Chhamia, Jharna and Pagle were produced and directed by her sister-in-law Protima Dasgupta. Begum Para herself was the co-producer of all three films. Neel Kamal in which she starred also featured Raj Kapoor and Madhubala who started their respective careers with the same film.

Her fame spread internationally after her photographs were published in America’s popular Life magazine in 1951. She willy-nilly became India cinema’s first pin-up girl after American soldiers serving in the Korean war between 1950-1953 became enamored with her pictures which were invariably to be found plastered on the walls of their barracks.

In 1958, Begum Para married Nasir Khan, the younger brother of superstar Dilip Kumar. Nasir Khan had acted with Para in films such as Dalsukh M Pancholi’s Lutera, Bhagwan Dada’s Kar Bhala, and Kumar Anand’s Aadmi. While she continued to get good offers post-marriage, she preferred to focus on home and hearth. Aadmi was thus her last film as a lead actress.

She later stepped into film production with Zid (1974), starring Sanjay Khan, Saira Banu and Danny Denzongpa. The film was directed by her husband Nasir Khan. Tragedy struck when Begum Para and Nasir Khan went to Dalhousie location-hunting for their next schedule. On their way back, Khan suffered a massive heart attack during their stay in Amritsar, and passed away. It was a very challenging time for Begum Para, as her children were young, and she had already invested considerable money in the film under production. On the persuasion of her sister and brother who had settled down in Pakistan, Begum Para migrated to Pakistan. However, she found it difficult to adapt to the conservative society and returned to India.

After staying away from the cameras for approximately 50 years, Begum Para was wooed back to the silver screen by filmmaker Sanjay Leela Bhansali. She played the grandmother Nabila or Badi Ammi in his 2007 romantic film Saawariya. The film marked the debut of Ranbir Kapoor and Sonam Kapoor. Admitting that she had doubts about returning to the cameras, Begum Para also later declared that after shooting, she felt like she had never gone away.

Begum Para was connected to the film industry through her relatives. Her husband Nasir Khan was the younger brother of screen sensation Dilip Kumar. Her elder sister Zarina’s daughter Rukhsana Sultana was married to Khushwant Singh’s younger brother Shivendra Singh. Rukhsana is the mother of actress Amrita Singh. Begum Para’s son Ayub Khan also made his mark as an actor in films and TV.

Way ahead of her time, Begum Para was known to declare that she did not bother to disguise her drinks with cola as other actresses of her time did, when consuming alcohol was considered a taboo. She shared a close friendship with Nargis, Geeta Bali, Nadira, Shyama and Nilofer. They were known to enjoy fun times together.