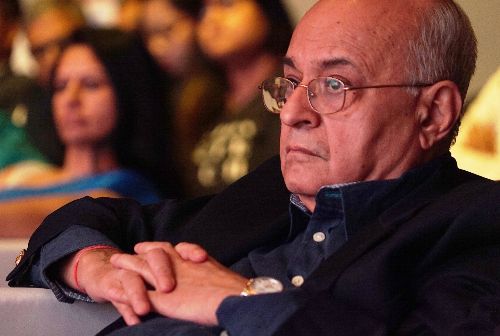 The multi-faceted Amit Khanna is a producer, director, poet, lyricist, author, and media and entertainment guru. He has won the National Film Award on three occasions for Best Lyrics for the film Bhairavi (1996), Best Urdu Film for Sardari Begum (1996), and Best Hindi Film for Gudia (1997). While he was the founding chairman of Reliance Entertainment, he has also been president of the Producers Guild of India, and founder trustee of the Mumbai Academy of the Moving Image. A media professional who has worked in print, radio, television, film, stage, live entertainment and digital media, he started his film career as an executive producer, writer and lyricist with Dev Anand’s Navketan Films in 1970. He went on to write the lyrics of approximately 250 film and non-film songs. The 80s saw him work on several critically acclaimed feature films, documentaries, commercials and TV programmes. He set up Plus Channel in 1989, which was India’s first integrated media and entertainment company. He was a member of the Prime Minister’s Committee on Information, Communication and Entertainment from 2007-2008. In 2013, his anthology of Hindi poetry, Anant Raag (Infinite Verse), was published.
Born on 1 March, 1951 to Hem Khanna and Jawaharlal Khanna, Khanna began his career in 1971 as executive producer with Dev Anand's Navketan Films. He worked as Executive Producer on multiple films such as Shareef Budmaash (1973), Heera Panna (1973), Ishk Ishk Ishk (1974), Des Pardes (1978), Man Pasand (1980), Lootmaar (1980), Is Raat Ki Subah Nahin (1996), and Sardari Begum (1996). He was business executive & production controller on Bullet (1976), Jaaneman (1976), Saboot (1980), among other films. He wrote and directed Sheeshay Ka Ghar (1984), and also directed Aashiana (1986) and Shesh (1988). He also produced Aur Ek Prem Kahani (1996), Bhairavi, Laalchee (1996), Papa Kehte Hain (1996), Do Rahain (1997), Saaz (1997), and Gudia (1997). He also penned the dialogues of Saaransh (1984), and was the script consultant on 1942: A Love Story (1994). As a lyricist, he worked on several films such as Star (1982), Shiv Charan (1984), Purana Mandir (1984), Avinash (1986), Agnichakra (1997), Hattrick (2007), and Malik Ek (2010). He penned the lyrics for the opening theme song of no less than 10 Indian television series, such as Buniyaad (1986), Dekh Bhai Dekh (1993) and Swabhimaan (1995). He also wrote the lyrics for non-film music albums by singers Nazia and Zoheb Hassan, Sharon Prabhakar, Salma Agha, Nusrat Fateh Ali Khan, Mahendra Kapoor and Shafqat Ali Khan, also directing three music videos for Nazia Hassan's music album Young Tarang in 1984.
Khanna has produced several successful TV series such as the landmark Buniyaad, Chhapte Chhapte, Apne Aap, A Mouthful of Sky which was India's first English soap opera, Zameen Aasmaan, Swabhimaan, Badalte Rishte, Mumkin, Ajeeb Dastaan Hai Yeh, Paltan, Kabhie Kabhie, and Sab Golmaal Hai.
Setting up TV production house Plus Channel in 1989, he was Managing Director and Group Editor of the company. Increasing the scope of the company to include the production of films, music, and event management services, Plus Films productions such as Gudia and Sardari Begum went on to win prestigious awards such as National Film Awards. Under his tenure, the organization expanded its role to produce movies and music, and provide event management services. In India, Plus Channel was a pioneer in producing audio books in both prose and verse, as well as business news shows on television. Serving Reliance Entertainment for 15 years as Chairman from 2000, he guided the company in establishing its presence in Hollywood, including signing on deals with top stars, forming a joint venture with Steven Spielberg's DreamWorks SKG, and inking an $825 million production and distribution deal with DreamWorks Studios.
The only permanent member of the Council of Management of Producer Guild of India—the previous two being V Shantaram and Raj Kapoor—Khanna has been keynote speaker for Federation of Indian Chambers of Commerce & Industry (FICCI), NASSCOM, Confederation of Indian Industries (CII), and ECO, serving on more than 50 international government committees and trade organizations and institutions.
Winner of several awards such as the Film Critics Council Lifetime Award, and the Lifetime Achievement award for contribution to film and television, Khanna has been mentioned by Time, Newsweek, Variety and The Hollywood Reporter as a global leader of film and television. A guest lecturer at New York University and the University of Southern California, he has served on the Indian Panorama (Western region)’s selection panel thrice, and was also the first Indian on the International Emmys jury.
With decades of experience in journalism, Amit Khanna continues to pen columns for leading news websites.