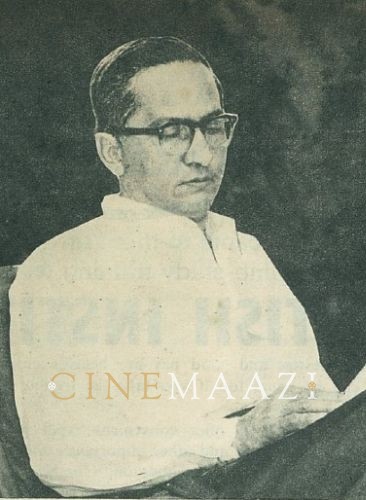 The sound recordist Dinshaw Billimoria was born in Bombay on September 28, 1912. He finished his schooling in Baroda, not far from where his grandfather served as a station master. Matriculating in 1927, Billimoria intended to study science, but could not clear the exams in mathematics. Abandoning all hopes of completing an Inter-science degree, he moved to Bombay in 1933 and obtained a diploma in electrical engineering from the Victoria Jubilee Technical Institute. He then tried to take up a career in marine engineering but failed to pass a Dufferin test conducted by the Indian merchant navy. Following this, he received an offer to join Sagar Movietone’s sound department as an apprentice in 1937. At the time, the department was headed by Chandrakant Pandya.
Under Pandya’s guidance, he rose to be an assistant sound-recordist within a year. While he assisted Chandrakant Pandya for Mehboob’s Aurat (1940), he also recorded another film for Chimankant Gandhi titled Nai Roshni (1941). His first independent assignment came with Chimankant Gandhi’s 1942 release Lalaji. Billimoria also recorded part of Mehboob Khan’s Roti (1942), followed by Taqdeer (1943), Sohrab Modi’s Shama (1946), M. Sadiq’s Sham Savera (1946) and Y.D. Sarpotdar’s Divani (1947). Billimoria witnessed the birth of National Studios with the amalgamation of Sagar Movietone and General Films, and later the transformation of National Studios into Central Studios. In 1948, he left Central Studios to join Shree Sound Studios. Two years later, he joined Mohan Studios.
At Mohan Studios, Billimoria recorded for several films like Sarkar (1951), Alif Laila (1953) and Chham Chhama Chham (1952). He recorded for Bimal Roy for the first time under the Mohan Studios banner for Naukri (1954), and worked with him again in Amanat (1955). Among the other films, he worked on during his tenure at Mohan Studios included Yahudi (1958) and Aas Ka Panchhi (1961). Besides being a recordist, Billimoria was also an administrator. When the administration passed into the workers’ hands in 1950, he became the Chairman of the Mohan Pictures’ Workers’ Industrial Co-operative Society.
During this time, Billimoria handled the soundtrack for dozens of films including Sohrab Modi’s Parakh (1944), Bimal Roy’s Madhumati (1958) and Bandini (1963). An oft-honoured recordist, he won the Bombay Film Journalists Association’s award for his work on Madhumati. He won his first Filmfare Award for Best Sound Recordist in 1964 for Bandini. Over his career, Billimoria worked on several well-known films like Roop Basant (1955), Begunah (1957), Mere Bhaiya (1972), Piya Ka Ghar (1972), Saudagar (1973), Geet Gaata Chal (1975), Tapasya (1976), Chitchor (1976), Dulhan Wahi Jo Piya Man Bhaaye (1977), Taraana (1979) and Ek Baar Kaho (1980). It took him another fourteen years to win his second Filmfare Award for Best Sound Recordist for Agent Vinod (1977).
Billimoria immensely enjoyed working with Bimal Roy, who paid careful attention to the soundtracks for his films. For Bandini, they consumed almost 33000 feet of sound film to capture all the sound effects the needed. He was impressed with the progress Indian cinema made in techniques of recording sound, having full knowledge of the pre-playback era. During that phase of his career, technicians would transport entire orchestras to outdoor sites for direct recording, and low frequency and mid-tones were particularly difficult to record. Voices often came out far too sharp. In Billimoria’s opinion, films made by Bombay Talkies excelled in terms of sound quality, since the department was under the skilled guidance of S. Mukherjee and D. Vacha.
Billimoria was married and the father of twin daughters.