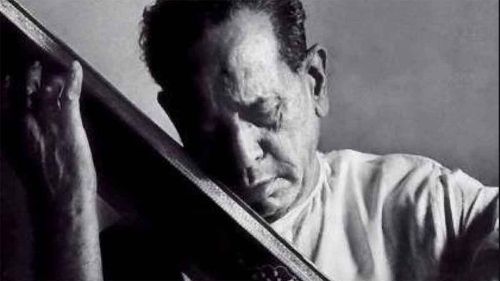 Hindustani classical singer extraordinaire and Bharat Ratna, Pandit Bhimsen Joshi has left his mark on the Kirana Gharana with his spontaneity and quick taans or tempo musical notes, which bore witness to his outstanding voice training and control. Considered a musical wizard, he was renowned for his khayal form of singing, which was loved by both the critics and the masses alike. One of the most prolific exponents of Hindustani classical music, he was essentially a purist who did not dabble in experimental forms of music. While his singing was influenced by greats such as Kesarbai Kerkar, Begum Akhtar and Ustad Amir Khan, he, along with Gangubai Hangal, is credited with taking the Kirana gharana to great heights. Marked by precise notes, and mastery over beat, his popular renditions of devotional music were also adored. He also lent his voice to several films, including Basant Bahar (1956) with Manna Dey, Birbal My Brother (1973) with Pandit Jasraj, and Kannada films like Sandhya Raaga (1966) and Nodi Swamy Naavirodu Hige (1983). He also sang for the films Tansen (1958) and Ankahee (1985) with the latter fetching him the National Film Award for Best Male Playback Singer. He was also awarded the Sangeet Natak Akademi Award for Hindustani music – vocal, the Padma Bhushan, and the Delhi government’s Lifetime Achievement Award, among other honours. Performing in live concerts across Afghanistan, Italy, France, Canada and USA for close to two decades between 1964 to 1982, he also instituted the annual Sawai Gandharva Music Festival as a mark of honour to his guru, Pandit Sawai Gandharva.
Born Bhimsen Gururaj Joshi on 4 February, 1922 in Dharwad, Karnataka, to Godavaribai and Gururaj Joshi, he was the oldest of 16 siblings. Exposed to the singing of bhajan singers as they passed in procession by his residence, as well as the azaan, the call to prayer, from a nearby mosque, this early musical exposure made a deep impact on his young mind. His fondness for the harmonium and the stringed tanpura grew, even as a recording of Abdul Karim Khan’s Thumri Piya bin nahi aavat chain helped crystallise his resolve to become a musician. Leaving home at the age of 11 to find a guru in Gwalior, Lucknow and Rampur, he was tracked by his father and brought back home. He went on to train in Hindustani Classical music under Pandit Sawai Gandharva. For a period of four years from 1936 to 1940, he absorbed the nuances of the ragas that formed the base of the Kirana gharana.
Pandit Joshi’s first live performance occurred in 1941, when he was 19. The following year, his first album was released by HMV, a compilation of Marathi and Hindi devotional songs. Moving to Bombay in 1943 to pursue work as a radio artist, he won accolades at a concert in 1946 to celebrate the 60th birthday of his guru, Sawai Gandharva. Having ‘arrived’ as Hindustani classical vocalist of merit, he went on to perform at
several venues, concerts and shows, even as album after successful album was released by HMV. He is the first Hindustani vocalist to have the honour of his record going platinum.
Joshi’s distinctive style and mastery over rhythm were also exhibited in his devotional music rendered across languages such as Hindi, Kannada and Marathi. His contribution to film music was also appreciated, as he sang the well-known song Ramya hi swargahun lanka in the Kannada film Sandhya Raga, and collaborated with renowned artists like Manna Dey in the Marathi film Swayamvar Zale Siteche (1964). He also collaborated with Carnatic vocalist M Balamuralikrishna in the song E pariya sobagu, and with Pandit Jasraj in the film Birbal My Brother, winning the National Film Award for Best Male Playback Singer for his rendition of Thumak thumak pag dumak kunj madhu in the Hindi film Ankahee. His song Bhagyadalakshmi baaramma was used by Anant Nag and Shankar Nag in the Kannada film Nodi Swamy Naavirodu Hige, while he also rendered playback for P L Deshpande’s Marathi film Gulacha Ganapati (1953).
Pandit Joshi became widely known across India for his performance in the national integration music video Mile Sur Mera Tumhara (1988), which he had composed originally. Composed by Louis Banks and P Vaidyanathan, he featured alongside India’s musical greats including Balamuralikrishna and Lata Mangeshkar, in a moving display of cultural diversity. He was also part of Jana Gana Mana produced by A R Rahman on the 50th anniversary of the Indian Republic.
Married twice, his union with first wife Sunanda Katti produced four children—Raghavendra, Usha, Sumangala, and Anand, while his marriage to Vatsala Mudholkar resulted in three children—Jayant, Shubhada, and Shrinivas. Possessing a passion for football and cars, Pandit Joshi was also a keen swimmer and yoga enthusiast.
Pandit Bhimsen Joshi passed away on January 24, 2011. He was cremated at Vaikunth Crematorium in Pune with full state honours.