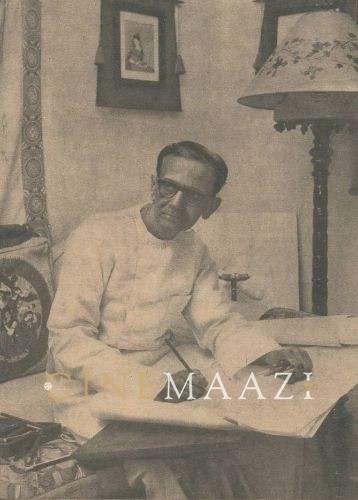 The noted painter and distinguished art director Kanu Desai was born on 12 March 1907 as Kanhaiyalal Hukumatrai Desai in Ahmedabad. His father was a court clerk. When his parents passed away, he was only ten years old. Along with his brother and sister, he was sent to live with a maternal uncle. He matriculated from the Proprietary High School, Ahmedabad ath the age of fourteen and enrolled in the National College, Gujarat, which then had Acharya J.B. Kripalani as its principal. Once he had passed his Intermediate examination, Kanu Desai was in the first year of his Bachelor's degree when he discovered his passion for the arts. He won a scholarship to study painting at Tagore’s esteemed Viswa-Bharati University in Shantiniketan.
In Shantiniketan, Kanu Desai often participated in singing sessions led by Rabindranath Tagore every evening. He also learnt the Bengali language, mastered the Esraj and was tutored in Manipuri dance. Later, he became an assistant curator at the university’s museum, an experience that exposed him to a wealth of Chinese and Japanese paintings.
Once he had obtained his diploma, Kanu Desai returned to Ahmedabad to his old alma mater as an Arts Professor. While there, he drew a portrait of Mahatma Gandhi, which the subject consented to autograph as well. Under the leader’s influence, Kanu Desai used Khadi as the material for the canvas. In 1933, Kanu married Bhadra Desai, a student of the SNDT college. The two enjoyed years of happy matrimony, and Kanu Desai always referred to her as his “inspiration” up until her passing in 1959.
Kanu Desai was running an arts school in Ahmedabad with his wife’s help when he was contacted by Balchandra Shukla of Prakash Pictures to take charge of art direction for a film titled Poornima (1938). Kanu Desai accepted the offer and thus entered the world of cinema. As an art director, Kanu Desai worked on the sets and décor of nearly 20 films, primarily of the mythological, devotional and period film genres. These included Narsi Bhagat (1940), Radhika (1941), Bharat Milap (1942), Ram Rajya (1943), Vikramaditya (1945), Baiju Bawra (1952), Jhansi Ki Rani (1953), Shree Chaitanya Mahaprabhu (1953), Angulimala (1960), Sampoorna Ramayana (1961), Geet Gaya Pattharon Ne (1964) and Jhanak Jhanak Payal Baaje (1955).
For his work in Jhanak Jhanak Payal Baaje, Kanu Desai won the Filmfare Award for Best Art Direction in 1957, his work on Patrani (1956) was also felicitated by the Bombay Film Journalists’ Association. Kanu Desai also designed the costumes for Sohrab Modi’s ambitious project in colour, Jhansi Ki Rani, starring Mehtab. Some other films brightened by Kanu Desai’s touch included Goonj Uthi Shehnai (1959), Navrang (1959), Sehra (1963) and Hariyali Aur Rasta (1962). Although the nature of Hindi filmmaking often proved to be a constraint to other art directors, Kanu Desai developed his own distinctive style over the years. He often used huge framed paintings, elaborate sculpture-panels for walls and a quaint blend of splendor and simplicity in most of his film sets. His fine sense of colour harmony was demonstrated in films like Jhanak Jhanak Payal Baaje, in which he used different coloured rangoli to depict the credits on the floor. Kanu Desai continued to work well into the sixties with films like Himalay Ki Godmein (1965), Nawab Sirajuddaulah (1967), Boond Jo Ban Gaye Moti (1967) and Raja Aur Runk (1968).
Kanu Desai received the Gujarat Gaurav Puraskar from the Gujarat State Lalit Kala Academy in 1965. He passed away in 1980.