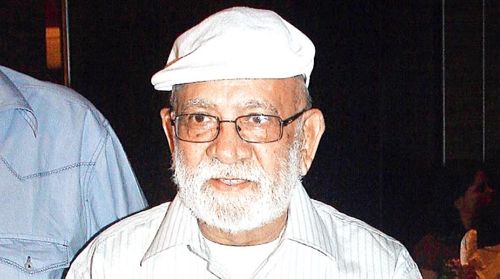 Writer, filmmaker and actor, Lekh Tandon was bitten by the cinema bug at the young age of 11. While in Bombay on a trip, he was staying with Prithviraj Kapoor, who took him to view a shooting. Dazzled by the world of cinema, the young boy made up his mind to become a filmmaker, and he did just that, even attempting to sabotage his own engineering entrance exam by skipping the drawing paper.

Born and brought up in Lahore in 1929, the Tandons moved to Delhi in August 1947 after Partition. The next month Lekh Tandon moved to Bombay and requested his uncle, Prithviraj Kapoor to help him. He was hired as an assistant camera man for Aag (1948). With the help of Raj Kapoor, Lekh Tandon was able to join the legendary director, Kidar Sharma as his Chief Assistant, thus beginning a journey that was to see Tandon direct some legendary movies himself. With Kidar Sharma, he worked on movies like Neki Aur Badi (1949) and Bawre Nain (1950). After leaving Sharma, Tandon was associated with R.K. films for nearly a decade. He branched out on his own as a director with the F.C. Mehra production, Professor (1962) starring Shammi Kapoor and Kalpana. The movie and its music were both smashing successes, counted as one of Shammi Kapoor’s best even today.

Following this, Tandon made some exemplary movies in the 1960s: the classic Amrapali (1966) starring Sunil Dutt and Vyjayanthimala; the reincarnation drama, Jhuk Gaya Aasman (1968) and Prince (1969). Huge box-office draws at the time of their release, these films still dominate public memory with their outstanding plots and melodious soundtracks.

The 1970s and 1980s saw Lekh Tandon continue his winning streak with movies such as Dulhan Wahi Jo Piya Man Bhaaye (1977), Doosri Dulhan (1983) and Agar Tum Na Hote (1983). Towards the late 1980s, Tandon shifted focus towards television and made some memorable shows like Phir Wahi Talash (1989), Dil Dariya (1988-89), also remembered as the first TV serial Shahrukh Khan had signed for and started shooting, and Farmaan (1990).

Tandon died at the age of 88 in Bombay on 15 October 2017, leaving behind his invaluable contribution to the worlds of both cinema and television.