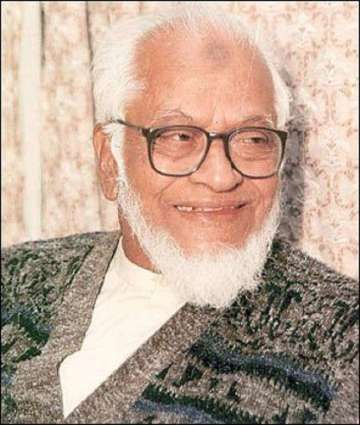 A composer and music director of the Indian and Pakistan film industry, Nisar Bazmi was known as a famous musician of South Asia. His filmography in India includes Jamna Paar (1946), Khoufnak Aankhen (1947), Hamari Kismat (1949), Jiyo Raja (1949), Roop Lekha (1949), Bade Saheb (1951), Ghazab(1951) and more. His work in the Pakistani film industry is evident in films such as Aisa Bhi Hota Hai (1965), Lakhon Mein Aik (1967), Jaisy Jantey Nahin (1969), Andaleeb (1969), Mohabbat (1971) and Pehchan (1975). He composed music for no less than 140 films in all in the course of his career as music director. He is also credited with introducing new singers like Alamgir, giving Anand Bakshihis first break as lyricist, and for his compositions rendered by playback singer Ahmed Rushdi.

He was born Syed Nisar Ahmed on 1 December, 1924, in the Khandesh area of Bombay Presidency, into an orthodox family with no musical background. Keen on learning music from a young age, he won over his teacher by singing Saigal's songs, and thus managed to convince his father of his sincerity. Moving to Bombay to live with his uncle, he soon joined the group of noted Yaseen Qawwal in Bombay, at age 11, becoming known as 'Yaseen ka chhokra'. Learning classical music from Ustad Amaan Ali Khan for four years, he joined All India Radio. Made permanent by AIR music director, Dinkar Rao Amembal on a salary of Rs.45 per month, it was a reason for his father to be overjoyed at a time when educated people did not earn as much in 1940.

At AIR, he composed the music for a radio drama, Nadir Shah Durrani, the songs for which were rendered by Rafiq Ghaznavi and Amirbai Karnataki. It was his work in this project that helped him bag his first film, Jamna Paar (1946) as a music director. He left AIR, adopted the name Nisar Bazmi, put singing on the backburner, and went on to focus on his career as music director. Over the next 15 years, he composed music for around 40 films, of which 27 films released. Most of these films were stunt films, for which he provided reasonably good music. Apparently top singer of the times, Mohammad Rafi took the amount of just Re.1 for singing Bazmi’s composition, Chand ka dil toot gaya for the film Khoj(1953), as money was short. Bazmi also gave Anand Bakshi a chance as a lyricist for the first time inBhala Adami(1958).

Mister Toofan (1963) was Bazmi’s last film in India; he migrated to Pakistan in 1962. Here, producer Fazal Karrem Fazli of Fazli Brothers offered him first film, Aisa Bhi Hota Hai. The music of this film became very popular and there was no looking back for Nisar Bazmi. His first song for the film was Mohabbat mei tere sar ki qasam, sung by Ahmed Rushdi and Noor Jahan. He also composed songs for singers like Runa Laila, Ahmed Rushdi, Mehdi Hassan, Faisal Nadeem, Khursheed Nurali (Sheerazi), and Saleem Shahzaad. Training many modern composers, his closest assistant was the classical singer and composer, Badar uz Zaman.

Bazmi went on to give music for 57 Pakistani films, winning seven Nigar Awards and also the Pride of Performance award from the President.

Bazmi’s last film was in 1981, post which he returned to Karachi to teach aspiring singers, of whom Faisal Latif achieved some level of success. He rued the fact that youngsters were largely interested in becoming rich and famous in a short time, and disliked the long, arduous method of musical training. In his later life, he was famous for learning the Quran by heart.