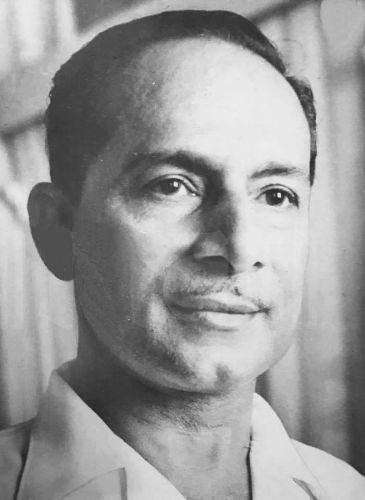 One of the most influential director-cinematographers in early Indian cinema, Nitin Bose was born in pre-independence Calcutta to Hemendra Mohan Bose. His father was the owner of Kuntain Press and Talking Machine Hall (distributor of Pathephone recording systems). Under the tutelage of his father, he was initiated into the world of photography, and Hemendra Mohan Bose gifted him a movie camera when he started college.

He soon became adept at making home movies, and progressed to making newsreels in 1921-22 on subjects like the chariot festival of Puri and the elephant hunt of the Maharaja of Tripura. He joined Indian Kinema Arts’ first feature film Punarjanma (1927) as the cinematographer. He also shot features for production houses like Aurora and International Filmcraft, as well as individuals like Sisir Bhaduri. He finished the film Buker Bojha (1930) when the director Modhu Bose left after a disagreement with producer Hiren Ghosh. He was also the cinematographer for the first Devdas film made by Naresh Chandra Mitra in 1928. Indian Kinema Arts was one of the predecessors to one of the most successful production studios of pre-Independence era Indian cinema – New Theatres. Bose joined New Theatres as their chief technical adviser and head of the camera department in 1930. This marked the beginning of the most prolific phase of his career.

As a cinematographer Bose worked with the stalwarts of early Indian cinema like Debaki Bose (Chandidas, 1932 and Meerabai/Rajrani Meera, 1933) and Premankur Atorthy (Dena Paona, 1931; Mohabbat Ke Aansoo, 1932; Yahudi Ki Ladki, 1933). He is also credited with having shot the legendary Natir Puja (1932) which claimed to have Rabindranath Tagore as its director. His first full-fledged opportunity to direct came with Debaki Bose’s departure from the studio in 1933. He made the Hindi remake of Debaki Bose’s Chandidas(1934) which became the studio’s first Hindi success, riding on the popularity of the love duets between K.L. Saigal and Umasashi. He also directed Dhoop Chaon/Bhagya Chakra (1935) which introduced the technique of playback singing in India. He would go on to make some of New Theatres’ most successful films throughout the 30’s and early 40’s: Didi/President (1937), Desher Mati/Dharti Mata (1938), Dushman/Jiban Maran (1939), and Parichay/Lagan (1941). His film Parichay/Lagan (1941) was instrumental in shaping the archetypal male romantic artist through Dilip Kumar’s performance. His resignation from New Theatres in 1941 became one of the key factors in the studio’s eventual demise. Meanwhile, Bose moved to Bombay, where he would make acclaimed films like Nouka Dubi/Milan (1946), Deedar (1951), Mashal/Samar (1950) and Gunga Jumna (1961).

Bose’s films showed a clear balance between the reigning influences of Bengali literary melodrama and realist trends in film-making, particularly in Didi/President and Desher Mati/Dharti Mata (1938). He played a significant role in the development of Dilip Kumar’s acting style, particularly its tragic strain, in films like Parichay/Lagan and Deedar. An excellent teacher, Nitin Bose also provided guidance to Tapan Sinha when he worked as a sound engineer in New Theatres. He touched the lives of many, including the filmmaker Bimal Roy, who worked as a cameraman for him. When Pahadi Sanyal moved to Bombay in 1942, Nitin Bose’s film Milan provided an important turning point in his career. His films tackled social issues such as relations between workers and management in Didi/President, property rights in Mashal/Samar and inheritance in Waris (1954). Gunga Jumna would go on to become one of the most influential action films in Indian cinema history influencing artists like Amitabh Bachchan and writer duo Salim-Javed, setting precedents for blockbusters like Deewaar (1975).

Nitin Bose received the Dadashaheb Phalke award in 1977. He passed away in 1986 leaving behind the legacy of one of the most formative careers in Indian cinema history.