The World is a stage and human beings have got to perform their respective roles. Life is a drama and fate the dramatist. This fact is brought home by this very interesting tale.

Samarnath, born in a middle-class family, had spent the years of his childhood, in the innocent company of his neighbour's daughter Tarangini. He was now returning to his village after appearing at the Law examination in Calcutta and the happy memories of his. childhood fleeted across his mind, He was immensely delighted to be back home to the old village, which still preserved the sweet associations of the past, where nature was still bountiful and beautiful, as in the past. The same old trees burdened with blooming flowers and delicious fruits, and the rippling sound of the rivulet was still endearing. When he met Tarangini, both the hearts leaped with joy and started harping the same eternal tune of love without uttering a word. Samarnath was sure of his success and dreamt of having her as his partner in life. But man proposes and God disposes.

Tarangini's father, Nabkumar, was a calculating guy who thought and acted in terms of material happiness. He•wanted his loving daughter to be married to a wealthy person. and fixed up Tarangini's marriage with Ramratan, a wealthy Zamindar, who was a widower and had a grownup son. The news of Tarangini's engagement to a wealthy widower shocked Samarnath like a lightning, He, however, strived his utmost to convince Nabkumar. that Tarangini would not be happy on a heap of wealth, but only with the man of her choice. Hard-hearted Nabkumar was adamant. Samarnath was terribly upset and frustrated and decided to make a desperate bid to win over Tarangini herself. On the night previous to the marriage day, when all were asleep and it was all quiet, he entered her room stealthily, Unfortunately, the worst happened. Tarangini tried to send him back, and in the dark. unexpectedly having stumbled over something a big noise was heard, and he was caught. They branded him, as a permanent mark for his this misdeed, Tarangini was all puzzled and fainted and so she could not protect him. He left the village with the conviction that it was Tarangini who had betrayed him.

Tarangini was married to Ramratan. She accepted her fate calmly and tried to forget her past. by getting engrossed in household work. She was loved by all for her affectionate and dutiful nature. She used to feel for all even for the poor blind flower girl, Sarla. She decided to make her happy by giving her away in marriage at her own expense. But Sarla had already given her heart to Jatin, the son of Ramratan, She knew that Jatin was too good for her, but even though she was blind. she had enough strength of mind to come to the serious decision of leaving home, in order to avoid marrying a person whom she did not like.

Samarnath became a well-known pleader in the course of time. He had now almost everything at his command but peace of mind. Even though time is the best healer, yet it could not make him forget his bitter experience. One day while he was pleading a case, a dramatic turn took place in his life—he started believing in the old saying 'An eye for an eye, a tooth for a tooth'. Yes! Revenge was the word, and he decided to take it. But how? Very soon a golden opportunity knocked at his door—he came to learn that the estate which Tarangini's husband Ramratan had been enjoying so long. actually belonged to a certain blind girl Sarla. He decided to find out Sarla and inform her of this, just mere information to Sarla might turn Tarangini a beggar. Samarnath thought of taking revenge on her in this way, After a great search in tracing that blind girl, he rescued her while she was in danger, On hearing her tale of woes, he decided to marry her and take revenge on Tarangini.

Very interesting and unexpected developments take place thereafter. What happened to Samar's plan of revenge? Whom did Sarla marry, and what fate awaited Tarangini are incidents which should be better seen on the screen. 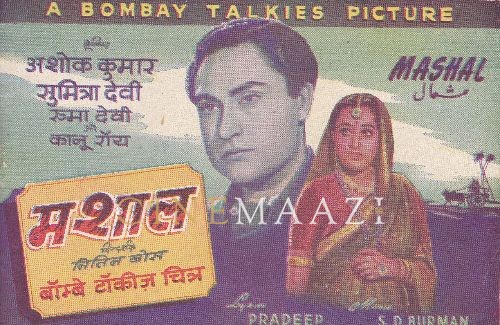 Bishyut Barer Barbela (On the Afternoon of Thursday, Unlucky Hour of Thursday)