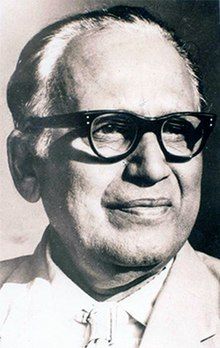 Playwright, satirist, comedian, storyteller, film director, screenwriter, correspondent, autobiographer, children's literature writer, educator, ideological writer, translator, poet – Prahlad Keshav Atre wore many hats. His contributions to the field of education earned him the title Acharya or teacher. He made a tremendous impact on the Marathi mind with his literature in the first half of the twentieth century. He invested money, energy and creativity in the field of film. He is known for films such as Bramhachari (1938), Brandychi Botli (1939), and the award-winning Shyamchi Aai (1953), and Mahatma Phule (1954). Later, he was to sum up his experience thus – “I was determined to realise the eternal truth and beauty of life through films, but I had no idea then that this creation is not a heroic artist but a speculator.”

Born on 13 August, 1898 in Kodit Khurd, a village near Saswad in Pune, his father was a clerk and also secretary of Saswad Municipality. Completing his primary and High School education from MES Waghire High School, Saswad, he matriculated from Fergusson College in 1919. Completing his Bachelor of Arts from University of Pune, Atre took up a career as a school teacher. In 1928, he earned his Teacher's Diploma from the University of London, and also studied Experimental Psychology under Cyril Burt. He also taught at Harrow before returning to India.

The sudden death of his father saw him giving up his plan of becoming a lawyer, to start teaching as a teacher at Sandhurst High School in Bombay. He made strides in the field of education, transforming the Camp Education Society and the Agarkar High School for girls ’education, and also creating textbooks.

He loved literature and his passion for writing was in evidence from the age of 13-14. He was introduced to Ram Ganesh Gadkari at the same age. He wrote writing novels, plays for school, and poems. This writing suddenly took a professional turn when he went on to pen three plays - Pralhad, Gurudakshina and Veeravachan. Damuanna Joshi, the owner of Balmohan Natak Company, persuaded him to write a play, and thus was Atre’s Sashtang Namaskar born. It received a storm of response, laughter and applause, thus marking the beginning of a successful journey in Marathi drama. Influenced by the technique and playwriting of playwrights Henrik Ibsen and Moliere, the comedy plays he wrote were a commentary on human attitudes and tendencies. On account of their distinctive comedic style, humorous contexts and dialogues, they made people laugh and introspect simultaneously. Among the popular plays he penned are Bhramacha Bhopala, Lagnachi Bedi, Moruchi Mavshi, Kavadi Chumbak, Paracha Kavala, Mi Ubha Aahe, To Mi Nabhech, Gharabaher, Udyacha Sansar, Jag Kay Mhenel, Preeti Sangam, and Panigrahan.

Atre entered the world of films at a time when he was reaching the pinnacle of success in the field of drama. While writing dialogues for films like Narad Naradi (1946) and Thakiche Lagna (1935), he became familiar with the technique of film writing. He penned Dharmaveer in 1937. This success was followed by films such as Bramhachari (1938) and Brandychi Botli (1939). When writing films as well as plays, Atre was inspired by the events around him. While writing Dharmaveer, Ibsen's play Pillar of the Society was his inspiration. His Brandychi Botli promoted the boycott of alcohol. The scene of Meenakshi Shirodkar bathing in the lake in Bramhachari and the song Yamunajali became an integral part of the history of Marathi cinema.

Events moved fast for Atre. He gained a partnership in Navayug company, went on to establish Atre Pictures, rented a studio for filming, bought it and renamed it Chitramandir, diversified into film distribution as Atre Pictures Distribution. He was hit by a financial crisis with his ambitious film Vasant Sena (1942).

Unfazed, he went on to take up Shyamchi Aai (1953). Based on the book Shyamchi Aai written by Sane Guruji in Marathi, the film revolved around the relationship between Shyam and his mother, who teaches him how to stick to his ideals and beliefs in spite of them living in poverty. A winner all the way, the film won the President's Medal - the 1954 National Film Award for Best Feature Film. He later collected the Silver Medal for his film Mahatma Phule (1955) on Mahatma Jyotiba Phule. The film is a biopic based on the life and works of Phule, the social reformer and activist from Maharashtra. Born in a socially backward class in 19th century India, Phule and his wife Savitribai and others worked for the uplift of masses of lower caste. He was the pioneer of women's education in Maharashtra and set up the first school for girls in Budhwar Peth, Pune in January 1848.

Atre’s accomplishments in journalism and politics were also impactful. As a tool of politics, he started the daily Maratha to support the United Maharashtra Movement. He also started various newspapers, such as Navayug, penning insightful articles and winning readership with content that combined political news, with humour and catchy language. Both Maratha and Navayug ran for many years with a vast circulation.

He was a member of Sanyukta Maharashtra Samiti during 1956–60, and was also arrested in 1956 under the Preventive Detention Act for his agitation. He also served as a member of Maharashtra Vidhan Sabha from Dadar constituency 1962–1967.

Poetry was another province of Atre's passion. He wrote verses from his own plays, songs from films, but as a poet he gained considerable fame for his satirical poems such as Zenduchi Phule. A good speaker and a great listener, he had a fantastic memory. His parties hosted for literary friends at his bungalow in Khandala are legendary. His five-volume autobiography, Karheche Pani shows his various facets.

Prahlad Keshav Atre breathed his last on 13 June, 1969, at the age of 71, just 10 months after the fifth volume of Karheche Pani was published.