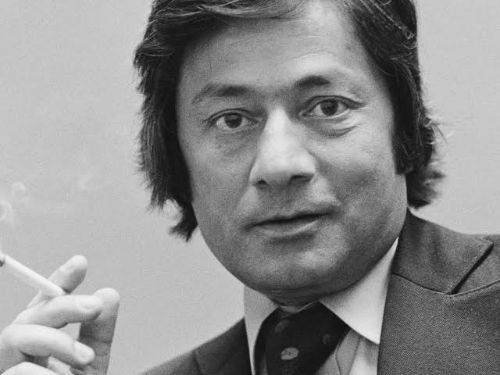 Be it the chess-obsessed Mir Roshan Ali in Shatranj Ke Khilari (1977) or the affable Lallan Miyan in Chasme Buddoor (1981), Saeed Jaffrey’s charming but powerful screen presence has left him indelibly etched in public memory. One of few Indian actors to have a successful international career to accompany his acclaim at home, Saeed Jaffrey was born in Malerkotla, Punjab in 1929. His father Hamid Hussain Jaffrey was a doctor who worked in the Indian medical service. Jaffrey initially studied history in Allahabad University and later worked as an announcer for All India Radio in 1951. He displayed incredible acting talent even during his school days, taking part in several theatrical productions. He formed his own theatre group Unity Theatre in Delhi and put up several English language productions.

In 1955 Jaffrey left to study drama at the Catholic University of America. After his graduation he embarked on a successful stage career. He became the first Indian to tour Shakespeare in the United States when he worked with the National Players. In 1958 he joined Lee Strasberg’s Actor’s Studio in New York and acted in Off-Broadway productions. In the cultural milieu of New York, Saeed Jaffrey played a pivotal role in introducing Ismail Merchant and James Ivory to each other. He would become the narrator of their early films like The Sword and The Flute (1959) and The Creation of Woman (1960). He formed a multiracial theatre company called Theatre in the Street in 1963. After his move to London in 1965, his acting career reached new heights of success. At this point, he received offers to appear in prominent roles in several British television shows like Kindly Monkeys, The Jewel in the Crown as well as his own show Tandoori Nights.

Closer home, Jaffrey made his film debut with Satyajit Ray’s Shatranj Ke Khiladi (1977). His terrific performance brought him instant fame and earned him a Filmfare Award for Best Supporting Actor. Strong supporting roles would follow in films like Chasme Buddoor (1981), Masoom (1983), Kissi Se Na Kehna (1983), Ram Teri Ganga Maili (1985) and Henna (1991). He was nominated for the Filmfare Award for both Ram Teri Ganga Maili and Henna. In his films, he often played the affable elder with little respect for orthodoxy, always on the side of the young lovers. He played Sardar Vallabhbhai Patel in Richard Attenborough’s Gandhi (1982). He also played a pivotal role in Hanif Kureishi’s landmark same-sex love story My Beautiful Laundrette (1985).

Saeed Jaffrey married his fellow thespian Madhur Bahadur with whom he had three daughters – Zia, Mira and Sakina. But their marriage was an unsuccessful one and they separated in 1964. Later he married Jennifer Sorrell with whom he stayed married till his death on 15 November, 2015. Saeed Jaffrey left behind a rich and colourful tapestry of characters in both theatre and cinema.