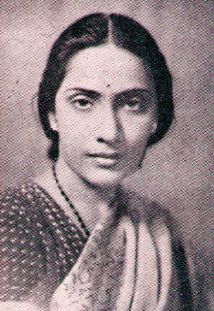 Indian classical singer Saraswati Rane has peerless antecedents. Daughter of the founder of Kirana Gharana – Ustad Abdul Karim Khan, she trained in the genre of classical singing under her famous siblings Sureshbabu Mane and Hirabai Barodekar. Among the early playback singers of Hindi and Marathi films, she made her singing debut with the Marathi film Payachi Dasi (1941). Among the films she rendered playback for are the Hindi films Ramrajya (1943), Sargam (1950), and Bhumika (1977). Some of her popular songs include Bina madhur madhur kachu bol, Tinak tin tani rendered by Lata Mangeshkar, Baju re mondar baju re, Aen dupari ekati, Ja gheuni sandesh pakhra, Naveli kali, Lalana mana, Chalo sakhi khelein, Tu ja door ja door re, Main preetam ki gunn gaoon re, among others. While she sang under leading music directors such as C Ramchandra, Shankarrao Vyas, K C Dey, and Sudhir Phadke, she was also invited to participate in the progamme on the eve of India’s first Independence Day in Delhi.

She was born on 4 October, 1913 in Miraj, Bombay Presidency, British India to Ustad Abdul Karim Khan and Tarabai Mane. Named Sakina Ahmed Khan, she grew up in a musical household, her father being the founder of the Kirana gharana. When her parents separated, her mother renamed all her five children; thus did Sakina became Kumari Saraswati Mane.

Saraswati was initial training in vocal music in the Kirana gharana style by her elder brother Sureshbabu Mane (originally named Abdul Rehman Khan) and her elder sister Hirabai Barodekar (Champakali). Both her elder siblings were Indian classical music greats of their times. She went on to hone her musical knowledge and craft, training under ustads of different gharanas like Ustad Natthan Khan of the Jaipur gharana who was the nephew of Alladiya Khan, Professor B. R. Deodhar, and Pandit Master Krishnarao of the Gwalior gharana.
Aged seven, she started her music career on stage, acting in musical dramas such as Sangeet Saubhadra, Sangeet Sanshaykallol, and Sangeet Ekach Pyala. She played key roles with popular artists of the day. Saraswati was also associated with her sister Hirabai Badodekar’s theatre company, which was an extension of the Nutan Sangeet Vidyalaya. She began performing for the theatre group Balgandharva Natya Mandir and toured across India in 1929.

She went on to perform on Akashwani in 1933, performing on All India Radio as a leading artist for several decades. It was only in 1990 that she retired from public performances. Rane was amongst the few classical vocalists to have participated in several Radio Sangeet Sabhas across the length and breadth of the country from the early 1940s to the mid-1980s.

Saraswati was also amongst the early female artists who rendered playback for Hindi and Marathi films. She first rendered playback in the Marathi film Payachi Dasi, directed by Gajanan Jagirdar. The song Bina madhur madhur kachu bol, which she sang in the Hindi film Ramrajya became so popular, that she was awarded by HMV for the highest sale of gramophone records at the time. She remained in the field of playback singing till 1954.

She is also known for pioneering the duet or jugalbandi by female artistes. Collaborating with her elder sister, Hirabai Barodekar, the pair introduced the concept of jugalbandi or duet vocal recital by women. Winning appreciation across the world, they enjoyed enormous popularity for their recitals from 1965 to 1980. She also became very popular for her Marathi light classical songs, popularly known as Bhav-geet. Her records became highly successful across Maharashtra.

Saraswati Mane also trained many talented students in classical music, some of whom went on to become well-known artists in the field. Her grand-daughter Meena Faterpekar followed in her footsteps becoming one of the few female classical vocalists of the Kirana gharana.

Married to Sunderrao Rane, Saraswati Mane passed away on 10 October, 2006 in Mumbai.