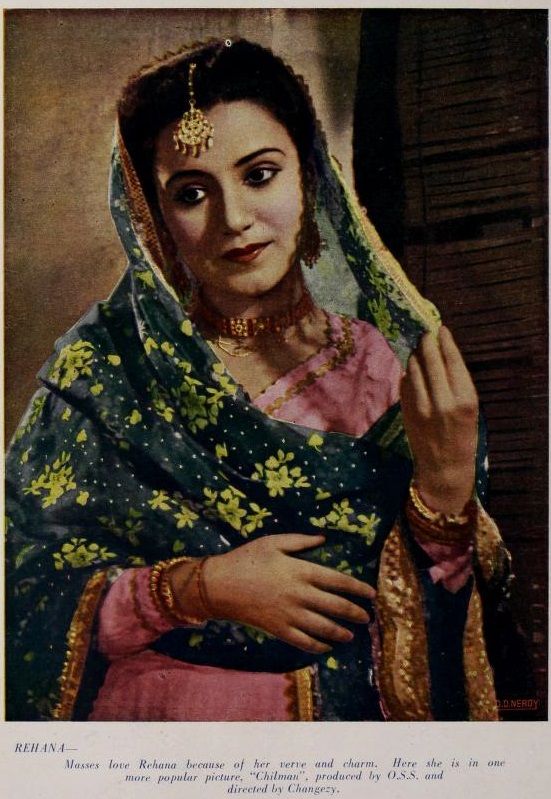 Two leading ladies of our screen sat together, chatting animatedly. They had been childhood friends and now, after a long lapse of years, they were comparing notes on their rise to fame. When they had parted as children, probably neither thought that they would meet again, or that it would be in such happy circumstances. Fortune has smiled on both of them. Even more remarkable is it that both girls have become film stars and right now they are right among the tops. Each has her fans and I shouldn’t think it exaggeration to say that the following of each runs to lakhs of film-goers throughout the country. Nor will you, when I tell you their names: Nimmi and Rehana.


Before Nimmi went into films, she had lost her mother and suffered misfortunes enough for a girl in her teens. But this is not her story. It is Rehana’s. Rehana came to films from the stage, where she started as a dancer while still a child. Rehana has had a more exciting career. The success of both has been due to the talent each possessed. But whereas Nimmi was an ingenue, sprang from obscurity into full fame and success, and found herself a star overnight as it were with her very first appearance on the screen, Rehana was a mature young lady, accomplished, trainer and experienced on the stage, self-possessed and independent when she first ventured into films. That was some half a dozen years ago. She still retains those qualities and is the most determined and independent woman. There is too in her an inner effervescence which comes out in delightful ebullience in her screen portrayals and creates a lasting impression of youthful charm upon all who come into contact with her. Twenty-two year-old Rehana is vivacious, sweet very dignified, with a bubbling gift of conversation and a ready wit – a real personality which fascinates as well as impresses with its charm and its strength of will and character.
She thinks it helps an artist to develop histrionic capacity better to act different types of characters and not to be typed in some special kind.
She has very clear ideas about most things, with likes and dislikes which are decided and sharply defined. There is a singleness of purpose in everything she attempts and a wholehearted enthusiasm which generally carries her though. The secret, she explains, is she was thrown upon her own resources at a very early age. She had dancing in her blood and, even as a toddler, she delighted her parents with her childish grace. Feeling she had talent, they decided to train it and at the age of five, she became the pupil of the great Kathak maestro, Shambhu Maharaj.  A more apt pupil that renowned tutor could not have wished for. He himself belonged to Kajjan’s famous touring company and occasionally he took his tiny pupil to rehearsals when the company was in Lucknow. These visits implanted in the little girl a liking for the stage and a trouper’s life. She was noticed by the great Kajjan herself, once asked to dance at her house. Seeing the child’s ability, Kajjan made her a member of her company.

Thus began in childhood the career which finally brought Rehana to the screen. The happiest years of it, she told me, were the three she spent as a member of Kajjan’s troupe, during which Rehana toured the whole of India and even went abroad. She thoroughly enjoyed the bustle and the excitement and the frequent changes in her surroundings. She recalls with amusement how, when she was cheered wildly for the first time, she did not imagine for a moment that the applause was meant for her. It was only when she was ordered back on the stage and told to repeat her number that she realized that it was her the audience had been cheering. It was a thrilling experience and one which she strove to repeat each time she appeared in public and enjoyed each time, but not quite the way she had, that first unforgettable time.


Under the strict regime which Kajjan imposed on the members of her company, Rehana was better looked after then she could ever be at home and blossomed into a seasoned artist and a very attractive young woman with a sound head upon her shoulders. When she returned to India, she was invited to join an ENSA unit. She did and speedily established herself as ENSA’s most popular junior member, as much on account of her age as because of her really good performances. It was wartime and the sight of the girlish performer put cheer into the hearts of Indian troops stationed in distant parts of the war theatre. Greeted thunderously on the stage in every camp, adored because of her tender years, Rehana travelled throughout the country and beyond, performing at hundreds of Army centres. When the war came to an end, she was still a teenager with an outlook matured by her travels and her experience as a touring artist with ENSA and Kajjan’s company.

Rehana settled with her parents in Bombay. Her father was a manufacturer of Moradabadi silverware and had owned a factory in Lucknow. She was born there in 1931. Her full name was Rehana Anjuman Chowdhury. Reports of her talent as a dancer had long preceded her to Bombay. One day she happened to be dancing at a party where the guests included a number of film personalities. She caught the eye of a well-known film director. The sequel was a role in the film Adab Arz (1943).


Rehana did so well in the dance ensembles in this picture that screen assignments poured upon her in a stream. Jayant Desai signed her up for his Tadbir (1945). Then came the leading role in Filmistan’s Shehnai (1947) which shot her to fame. She acted in more film: Sargam (1950), Sunehre Din (1949), Actress (1948), Nirdosh (1950), Lajawab (1950), Saudagar (1951) and many others. By now Rehana is an established favourite with filmgoers throughout the length and breadth of this country.

Most of her roles have been of the light comedy type. She likes them, but she is equally keen on serious parts. In Sunehre Din, she had a straight part and acquitted herself in it with credit. She thinks it helps an artist to develop histrionic capacity better to act different types of characters and not to be typed in some special kind. She is a painstaking worker and always comes well prepared to face the camera. Mindful of her obligations to give her best to her parts, Rehana takes only as much work as she can devote her best attention to.

After a day’s hard work, she loves the quiet of her home, Villa Rehana in Bandra. Here she occupies herself with one or another of her hobbies and interests. She designs costumes, dances and, when she is in the mood for it, designs dance numbers for her pictures, read when she can find the time – mostly novels and light literature – and for exercise plays ping-pong and a spot of cricket. Her parents and an only brother live with her. There are nephews and nieces in the house.

Rehana loves to have her people around her. Her house is forever filled with happy faces and exudes a family atmosphere that is most attractive. And she has her friends there, too, in shoals at every occasion.

Cinemaazi thanks Sudharshan Talwar for providing this rare interview.
The poster images are from Cinemaazi archive and were not part of the original article.