Balraj Sahni: From the lacerations of Partition to Garm Hawa 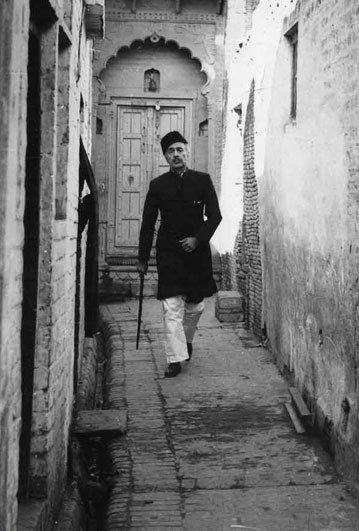 In October of 1962, Balraj Sahni's visit to Pakistan received little press coverage in the local press. It was a private visit on the request of his old friend  Dr Nazir Ahmed  who earlier visited Mumbai and invited him to Pakistan. It was a usual visit with no film-star like welcome except his visit to his alma mater Gordon College Rawalpindi where students gathered around him and took autographs, perhaps the only place where he would have thought he is a film star. There was a one column news in film journalism saying that he is in Pakistan to launch a joint venture between India and Pakistan, a Punjabi movie possibly on the topic of Partition as during those days Balraj Sahni was deeply inspired  by Pakistani Punjabi movie Kartar Singh (1959). Balraj Sahni visited many cities of Pakistan for the locations of shooting. However the movie's idea was never executed. It was not the actor-writer's first visit to Pakistan after Partition - a year before he halted at Karachi Airport and enjoyed many glasses of good beer with a person with whom he shared the same Pothohari roots. The detailed account of his nostalgic journey back to his home after fifteen years comes to us through his travelogue ,"Mera Pakistani Safarnama" (My Pakistani Travelogue) penned in the Punjabi language as the actor-writer chose his mother tongue for the true expression of his feelings and thoughts.

Garm Hawa is his last film and the magnum opus of Balraj Sahni's acting career, released in 1973, a few months after his death. In 1974 the movie was India's submission for The Academy Award of Best Foreign Language Film category. This art film on the subject of Partition is the story of a migrant from Rawalpindi. Balraj Sahni plays role of Salim Mirza an owner of Shoe factory in Agra. The rational Muslim patriarch in Agra is caught in the flames of Partition. Although the violence and communal strife of Partition has been depicted in novels, films, short stories, documentaries and other forms of creative media but Garm Hawa, meaning Hot Winds gives a truly scorching view of how a peaceful and a happy Muslim family is slowly divided by the scorching winds of Partition. It sheds light on the economic, social, political and identity crises of Muslims soon after newly independent India.

In a  dialogue from this film, Salim Mirza says to the tongawalla on their way from the train station to his shoe factory:

Salim Mirza; How prosperous orchards  are  uprooted in these hot winds ,
Tongawalla :  The winds are scorching, Mian! Scorching!
Those who will not stay here (India) will be uprooted.

Geeta Rathore argues that the partition of India can be understood in two ways – 'partition as political fact', and 'partition as violence'. Partition as political fact depicts the dominant discourse on Partition historiography, which deals with grand narratives of the political fact of division. Garm Hawa is a cinematic experience of 'partition as psychological violence' which deals with the often neglected subject of 'violence'. Many Partition films focus on the plight of Punjabi Hindus and Sikhs , but Garm Hawa focuses on issues faced by the Muslim community ‒ their new relationship with the majority faith and the state, the tests of loyalty their members frequently undergo, and the constant threat of political and economic dis-enfranchisement.  Nandini Ramnath believes that Garm Hawa is a fine rediscovery of the storytelling techniques that were fashionable in the seventies ‒ the use of actual locations, dramatic close-ups, naturalistic performances and nuanced characterisation.
Salim Mirza was a giant tree in the hot winds (Garm Hawa) that refused to be uprooted.
The movie was written by M.S. Sathyu and Shama Zaidi with dialogue by Kaifi Azmi, based on an unpublished short story by Ismat Chughtai and shot by Ishan Arya.  Salim Mirza's brother leaves first, followed later by his son. His daughter pays a terrible price for losing two lovers to Pakistan. The refusal of 'Daddu' to leave the ancestral Haveli where she first came as a child bride portrays her emotional attachment to the place. The views of Fatehpur Sikri and Taj Mahal underline the sense of belonging that Salim Mirza had with the city. Salim Mirza was a giant tree in the hot winds (Garm Hava) that refused to be uprooted. Though Salim Mirza (like thousands of Muslims) chose to stay in India, he was constantly pushed to prove his allegiance to the country. For instance, Garm Hawa shows how the nationalised bank refused to give him credit; he faced suspicion while searching for a rented accommodation, and the state implicated him under espionage charges for sharing correspondence across the border with his relatives.The sufferings of dislocation and displacement is another aspect which has wider connotation than merely geographical. Moreover, apart from economic misery and physical abuse, the pain and  trauma of being labelled as refugees in their own homeland are some other aspects which have been deeply probed recently in the histories of memories.

Much of the team of film Garm Hawa had their roots in the Indian People's Theatre Association, better known as IPTA, once a hugely popular cultural adjunct of the Communist Party of India. A confident Balraj Sahni (Salim Mirza) with a stick in hand, Achkan and Karakuli topi appears on the poster of the movie, Garm Hawa. In 2015, Garm Hawa was resuscitated theatrically and again brought into debate on mainstream media. There are many similarities of Mirza Salim and Balraj Sahni in real life - both witnessed migration, suffered Partition trauma. The film was shot in Agra which is similar to Rawalpindi's down-town area where Balraj Sahni spent his childhood and youth. Balraj Sahni was deeply inspired by Pakistani Punjabi movie Kartar Singh.  According to Balraj Sahni movies made in India did not depict the culture and art of Punjab. Movies like Kartar Singh had done a great favor not only to eastern and western Punjab but to the whole India. It is probable that this pushed him to make a movie in Punjabi on Partition for which he visited Pakistan. It became his literary visit as he attended many literary gatherings with Punjabi writers, rather than meeting anyone from the Pakistani film industry.
Garm Hawa shifted the focus to the shared sufferings and emotions that Partition brought to the common people rather than grand political narratives.
Prominent films on Partition are  generally adaptations of available literature on Partition by those who witnessed Partition and later wrote short stories and novels. In M.S. Saythu 's words in an interview:
''Balraj Sahni and I were in the theatre together. I had worked for his Juhu Art Theatre and he was also in IPTA. He acted in my play – Aakhri Shama as Ghalib. There was a close association in a way and I admire his capability. Ideologically also, he was one with us. All these things helped. It was automatic for me to think of him as the lead person in the film.''
Garm Hawa shifted the focus to the shared sufferings and emotions that Partition brought to the common people rather than grand political narratives. Unlike other forms, the subject of Partition was carefully and sparingly addressed in cinema—both in India and Pakistan. Being witness to the events of Partition and riots the culminated to the escape of Sahni family out from Rawalpindi added to Balraj Sahni's performance. Somewhere he would have thought and found his own story while shooting and pronouncing dialogues of Garm Hawa. At a time when both Pakistan and India are losing Partition survivors with the passage of time specially in these times of pandemic, there are hundreds of such real life stories that can provide material for films on Partition. Like Garm Hawa, they can provide insights into the least explored aspects and narratives of Partition.

8-   'Garm Hava' brings back the Indian New Wave to where it belongs: the cinema by Nandini Ramnath
https://scroll.in/article/689553/this-week-garm-hava-brings-back-the-indian-new-wave-to-where-it-belongs-the-cinema

9-  Restored classic 'Garm Hava' will blow back into theatres on November 14 by Nandini Ramnath
https://scroll.in/article/686195/restored-classic-garm-hava-will-blow-back-into-theatres-on-november-14

11-  Portrayal of Partition in Pakistani Cinema by Huma Sadaf  https://www.sahapedia.org/portrayal-partition-pakistani-cinema

Ammad Ali is a freelance journalist, historian and travel writer. He has extensively write on Hindu, Sikh and Zoroastrian heritage of Pakistan.In 2013 he explored the house of Balraj Sahni in Rawalpindi. Since then he has been interested to know more about Balraj Sahni's life and art.