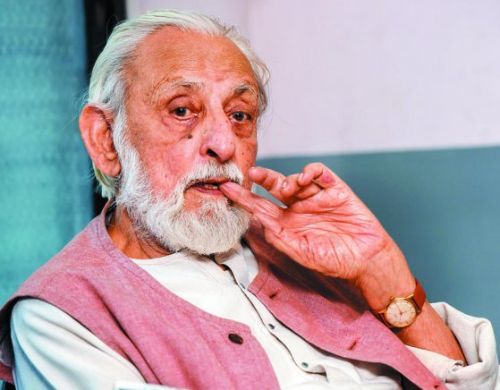 Renowned filmmaker and theatre director, as well as stage designer and art director, M S Sathyu (Mysore Srinivasa Sathyu) is celebrated for ushering in a new wave of parallel cinema in India. His films are consciously framed and well-designed responses to the social milieu of the time. Yet he claims to be no intellectual but a technician, with the political nature of his work being a reflection of himself. A theatre person at heart, it intrinsically influenced his work in film as well; he was also a known patron of IPTA. He is best known for his directorial Garm Hava (1974), a post-partition classic, wherein a Muslim businessman and his family struggle for their rights in a country which was once their own. Considered an icon alongside filmmakers such as Mrinal Sen, Satyajit Ray and Ritwik Ghatak, and a recipient of the Padma Shri in 1975, his body of work includes nine plays, eight feature films, three telefilms and four teleserials. His prominent directorials include Chitegoo Chinte (1978) and Bara (1982), an adaptation of UR Ananthamurthy’s short story, which won the Best Film and Best director awards at the Karnataka State Film Awards as well as the Filmfare awards.

Born Mysore Srinivasa Sathyu on 3 July, 1930 in Mysore, Karnataka, MS Sathyu graduated from Bangalore’s Central College and moved to Bombay in 1952. There he became associated with the Indian People’s Theatre Association (IPTA), staging plays such as Aakhri Shama (1969) in collaboration with poet Kaifi Azmi and the renowned Balraj Sahni playing Mirza Ghalib.

He entered films as assistant director to filmmaker Chetan Anand. Working as an independent art director for Anand’s Ladakh-set saga of the Sino-Indian War, Haqeeqat (1964), his work won him recognition as well as the Filmfare Award for Best Art Direction.

As an independent film director, he burst onto the scene with Garm Hava. It is a poignant portrayal of a Muslim family of shoemakers that stays back in Agra after Partition. Based on a short story by Ismat Chughtai, with story and screenplay by Kaifi Azmi and Shama Zaidi, the cast featured Balraj Sahni, A K Hangal, Geeta Kak, Jamal Hashmi, Farooq Shaikh, and others. The film addressed the plight of Muslims who opted to stay back in the land of their forefathers, and shunned Pakistan’s one nation-one religion theory. The film gradually reveals the psyche of the community, as well as its anxieties, insecurities, and longing for a past that cannot be brought back.

Among the last cinema productions featuring 1950s Marxist cultural activists such as Balraj Sahni and Kaifi Azmi, the film won several Indian National awards in 1974, including a National Integration Award. It was screened in the competitive section at Cannes and was also the Indian entry at the Oscars. It won the Filmfare award for best screenplay. In 2014, Garm Hava was re-released after restoration.

Incidentally, in a recent interview, when asked whether Garm Hava could be made in current times, Sathyu replied that he didn’t know, as the communal divide was becoming stronger, and intolerance and prejudice had grown, with India’s secular fabric getting eroded.

Garm Hava was followed by Kanneshwara Rama (1977), a political drama about a village outlaw. Based on the acclaimed novel Kannayya Rama by S K Nadig, the story is set in the 1920s during which a young rebellious youth named Kanneshwara Rama opposes the unjust orders given by the village head and becomes outlawed from the village. The film stars Anant Nag along with Shabana Azmi, Amol Palekar, Dheerendra Gopal and Venkatesh, with music by B V Karanth, who also enacted the role of the dacoit chieftain. The film met with critical acclaim and was screened at various film festivals across India and abroad.

His hilarious political satire Chitegu Chinte (1978) told the tale of a gangster with a unique ‘cover’ who rules the town he lives in, taking care of business from his bed in a home for the blind. Well-loved despite his criminal activities, his admirers and his own luck make him a difficult man to get rid of. Eventually, a local politician decides to try to take control of the situation by getting him to run for the presidency of his country. Unfortunately for the politician, this lovable rogue is nobody's puppet…

Sathyu’s Bara (1982), a straightforward and engaging watch, was an adaptation of a U R Ananthamurthy novel on the politics of a drought. The plot reveals the travails of a conscientious and somewhat callow young deputy commissioner (DC) of Bihar, Satish Chandra. His pleas to have the district declared as famine affected and make it eligible for emergency financial aid fall on deaf ears in the state capital. Reason: The on-going feud between the home minister whose constituency the district is, and the chief minister who is out to discredit his political opponent by ensuring that the people get no succour from the government. Sathyu himself would later rate Bara as a better film and a more difficult one to make because of its dry subject nature, compared to Garm Hava which had an easier to tackle sentimental story.

His 1994 directorial Galige revolved around an orphaned girl Nithya, with an unusual grit and courage, who meets a poor couple who claim to be her grandparents. Though suspicious of them, she supports them. She goes on to fall in love with a terrorist boy, who is hunted by the police. It was apparently based on the Khalistan movement.

Directorials to his credit include the short film Black Mountain (1971), originally titled Chyornaya Gora directed with Aleksandr Zguridi; Your Enemy: TB (1981); Kahan Kahan Se Guzar Gaya (1981); Ijjodu (2010), which is the story of a young photojournalist’s encounter with a girl who has been made a basavi (devdasi) at the altar of the village deity to save people hit by a devastating epidemic; and the documentary The Right to Live (2012).

Deeply involved with theatre, he worked on productions of Hindustani Theatre, Okhla Theatre of Habib Tanvir, Kannada Bharati and other groups. A patron of Indian People's Theatre Association (IPTA), he would win acclaim for directing plays such as Gul E Bakavali, Dara Shikoh, Amrita, Bakri, Kuri, Akhri Shama and more.

Later, associated with television, he made the tele-films Aangan, Ek Hadsa Char Pehlu, and Thangam. He also appeared in the Google Reunion commercial of 2013, which had gone viral. It featured him playing Yusuf, an elderly Pakistani man who is reunited with his childhood pre-Partition friend from India, Baldev played by Vishwa Mohan Badola.

He is married to Shama Zaidi, Indian screenplay writer, costume designer, art director, theatre person, art critic, and documentary filmmaker. Their daughter Shaily Sathyu is the artistic director of Gillo Repertory Theatre, an organisation that specialises in theatre for young audiences, and has also written and directed over ten plays.