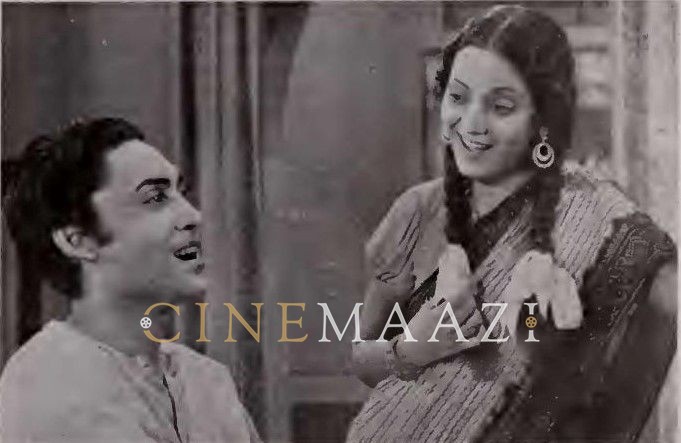 “Beautiful Bandhan” is the final verdict of fans and critics alike. “Beautiful Bandhan” - in those two words is symbolized the brilliant tribute of Producer S. Mukherjee to the memory of the late Mr. Himansu Rai. A son could not have more for a father than this disciple has done for his guru.

He has carried on the splendid traditions of his Master and in doing so keplt the Bombay Talkies at the top where it belongs.

Here is a glorious example of what discipline and training combined with honesty of purpose can do in the field of film production.

In “Bandhan” Himansu Rai is not forgotten. He is remembered more today than ever before. His “boys” have carried further the good work he once began and how proud must be the spirit of the father who gave his life to the institution he gave birth to.

What is good and outstanding in “Bandhan”? I would answer that by asking another. What is not good about it?

“Bandhan” is a picture with an undefinable charm. It hypnotizes you with happiness and when you wake up, a pleasant memory of a short and beautiful dream lingers in your mind and you feel like going through that experience again and perhaps again.

That is why “Bandhan” is beautiful and its undefinable beauty cannot be framed as beautifully in words as it has been done with art in celluloid.

The story is simple and simply told. Beautiful Beena-Leela Chitnis- the daughter of a village Zamindar does not like the new youthful villages headmaster, because her brother Ram talks such a lot about him.

Then one day she meets him and falls in love with him. The headmaster Ashok Kumar reciprocates that love with equal sincerity. The story now takes a too familiar turn and introduces a scheming father and his son Suresh - Shah Nawaz an England-returned product peculiar by his superficial sheen of civilization. Suresh is marked for marrying Beena to inherit the wealth of her father.

Beena’s romance with the poor headmaster is not liked by these two villains and they set villainy going. Things soon become hot for the young headmaster who is compelled to leave the village, burning his love-boats behind. Beena to please her ailing father and dead mother has agreed to marry Suresh while loving Nirmal, the headmaster.

The climax is reached when Nirmal who returns to the school in the night to meet Beena, finds himself on the scene of a crime committed by Suresh. Nirmal is accused of attempting to murder Gouri, another young girl in the eye of Suresh.

Nirmal however, keeps mum to protect Beena from a shameful compromise, to Bholanath, a lovable old teacher of the same school, clears the whole affair with his characteristic blundering ways and Nirmal and Beena are married at the very alter made ready for Suresh.

Thus ends a romance, which while it lasts, does not tear open your hearts, does not give you sermons of philosophy but merely tells you a simple story of a village maiden in love with the village headmaster which perhaps happens every day in our villages.

Once again Leela Chitnis, as was expected, gives a charming performance. With every scene she seems to grows younger and goes deeper into one’s heart. She becomes the beautiful spirit of this beautiful picture. Her experiment in make-up, however - a slightly different one from “Azad” - was not successful. In trying to remove the natural defect in her nose, she painted the walls in amber and accentuated the highlight on the ridge. The result was that the nose looked a bit too drawn out and the walls to subdued. Besides, the amber was not worked into the bases well and looked like a dark patch in indoor scenes. Had she powdered well after the paint, the contrast would not have been so obvious.

I, however, think that she need not accentuate the ridge of the nose. Doing so, makes her features too sharp and takes away a part of their natural mellowness. Where she actually needs the deep shade pencil is on the nostrils which are distended. A spot of amber well worked into the base will, in my opinion, do the trick. Why not try a number of screen tests with different experiments? It is an important problem to the producer where a principal star is concerned.

Ashok Kumar gives his usual good performance. V. H. Desai as Bholanath the old school teacher has a very sympathetic role in which he acquits himself well. There is no vulgarity in his appearing in towels in the presence of his daughter. As some prudish critics have chosen to think. It happens in Hindu homes every day and a Hindu daughter doesn’t look at the father that way for the prudish to object.

Shah Nawaz is not much of an actor, but being suitably cast he seemed to do well in the role of “Suresh” the villain of the piece.

The little boy Suresh, of whom a lot is being made in the publicity, acts badly. His attempt to look sad was pathetic. Besides being camera conscious, he seemed to be too precocious for his age which took away all the childish innocence from his years. I am afraid he was wrongly cast.

Photography, sound and other technical values maintain the in comparable standard of the Bombay Talkies.

This review cannot be concluded without mentioning the beautiful lyrics of Pradeep. How many can give the sweet melody which he gave to this picture?

By all means, see “Bandhan”. The spirit of the late Himansu rai is reborn in it.

Yes, Mukherjee, you have produced it the way the late chief would have it. Now, go ahead and give us another.

This is a reproduction of the original review published in Film India, 1940.