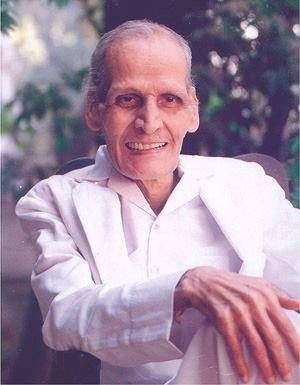 Kavi Pradeep had once said about the theme of his songs, “Love is just a part of life and the love written about today talks about love between the sexes only. But do young men and women have a monopoly where love is concerned? Aren't there different kinds of love between a mother and her children, between a father and his children, between a bhakt (devotee) and his deity, between a man and his motherland? I chose to write about all these different kinds of love.” And he did, particularly on the love between a man and his motherland, perhaps better than any other was able to.

Whether the peppy and hopeful Aao bachhon tumhe dikhayen or the heart-rending tribute to soldiers who had died defending the country in the Indo-China war - Ae mere watan ke logon, Kavi Pradeep’s songs have perhaps best expressed patriotism in India. He is regarded as one of the most well-respected patriotic poet-song writers during India’s freedom struggle, who fanned the spark of patriotic love via Hindi film music. His career spanning five decades saw him pen approximately 1,700 songs and nationalistic poems including the lyrics for around 72 films, including hits such as Chal chal re naujawan from Bandhan (1940) and De dee hame azaadi bina khadag bina dhaal from Jagriti (1954). Such was his expertise that he was made Rashtrakavi, (Poet Laureate), and came to be known as, Kavi Pradeep. While he first became famous for his patriotic lyrics for the film Bandhan, his reputation as a nationalistic writer grew after he penned Door hato ae duniya walo (Kismet, 1943). It was on account of this daring song that he was compelled to go underground to avoid arrest by the British government. He also penned the Paigham (1959) song O ameeron ke parameshwar which focussed on the woes of the poor in the realm of the rich. Kavi Pradeep’s skill lay in writing songs in simple words with a profound meaning that befitted the situation. He received several awards over the course of his career, including the Sangeet Natak Akademi Award and the Dadasaheb Phalke Award.

Born Ramchandra Narayanji Dwivedi, on 6 February, 1915 in the town of Badnagar near Ujjain, Central India Agency, British India, his passion for poetry became apparent at a young age. During his student days itself he displayed a unique style holding audiences’ attention at poetic gatherings. The fact that his poems won appreciation from listeners, further inspired and encouraged him to write. Adopting the pseudonym Pradeep, he went on to graduate from Lucknow university in 1939. His plan to pursue a career as a teacher underwent a change when he was invited to a poet’s conference in Bombay. It was here that Himanshu Rai, owner of Bombay Talkies, offered Kavi Pradeep his first film Kangan (1939), starring Devika Rani and Ashok Kumar. Moving to Bombay, Pradeep wrote four songs for the film, which became very popular; he even sang three of the songs himself. Bigger success came with his next, Bandhan (1940) produced by S. Mukherjee and directed by Gyan Mukherjee. Among the songs he wrote which became very popular was Chal chal re naujawan, coming as it did at a time when the Indian freedom movement was peaking.

The essential humaneness of his lyrics filtered into the 60s as well, despite the growing popularity of fast-paced numbers. He penned songs that won appreciation in the Rajendra Kumar-starrer Talaaq (1958), as well as Insaan ka insaan se ho bhaichara for Paigam (1959) starring Dilip Kumar, Raaj Kumar and Vyjayantimala, and S. Mukerji's Sambandh (1969) which was made popular by virtue of songs like Chal akela chal akela. In fact, his songs in the film Jai Santoshi Maa (1975) such as Main to aarti utaroon re Santoshi Mata ki became so popular that the low-budget film became the second-highest film of the year after the blockbuster Sholay (1975). The song Yahan wahan rendered by Kavi Pradeep himself also won him the Best Male Playback Singer from the Bengal Film Journalists' Association.

There is some interesting trivia surrounding possibly his most famous song – Ae mere watan ke logon. Apparently, Kavi Pradeep wrote the words in a sudden burst of inspiration which struck while he was at Mahim beach; he borrowed a pen from a passer-by and dashed out the opening stanza of the song on a bit of paper torn out of his cigarette packet! Via the song, which is frequently played on Independence Day and Republic Day, he sought to remind Indians of the sacrifices made by the nation’s soldiers in the 1962 war and reinstate pride in the country.

Incidentally, the song was to be sung byAsha Bhosle, after a misunderstanding occurred between C Ramachandra and Lata Mangeshkar. However, it was Kavi Pradeep who insisted on Lata rendering the same as he felt that only she could do justice to it. Mangeshkar was convinced on the condition that Kavi Pradeep himself be present at the rehearsals. Lata Mangeshkar famously performed the C Ramachandra composed song on 27 January, 1963 in the presence of President Sarvepalli Radhakrishnan and Prime Minister Jawaharlal Nehru at a fundraiser for war widows held at Delhi’s National Stadium. It was here that Nehru was said to have been moved to tears. While Kavi Pradeep was not invited to this event, he had the honour of singing the same song for Pandit Nehru when the latter visited Bombay three months later, where Pradeep also presented the original handwritten poem to him. Additionally, he had pledged the royalties of the song to the War Widows Fund; in 2005 the music company Saregama (HMV) was ordered by the High Court to pay Rs.1 million as arrears in royalty to the fund.