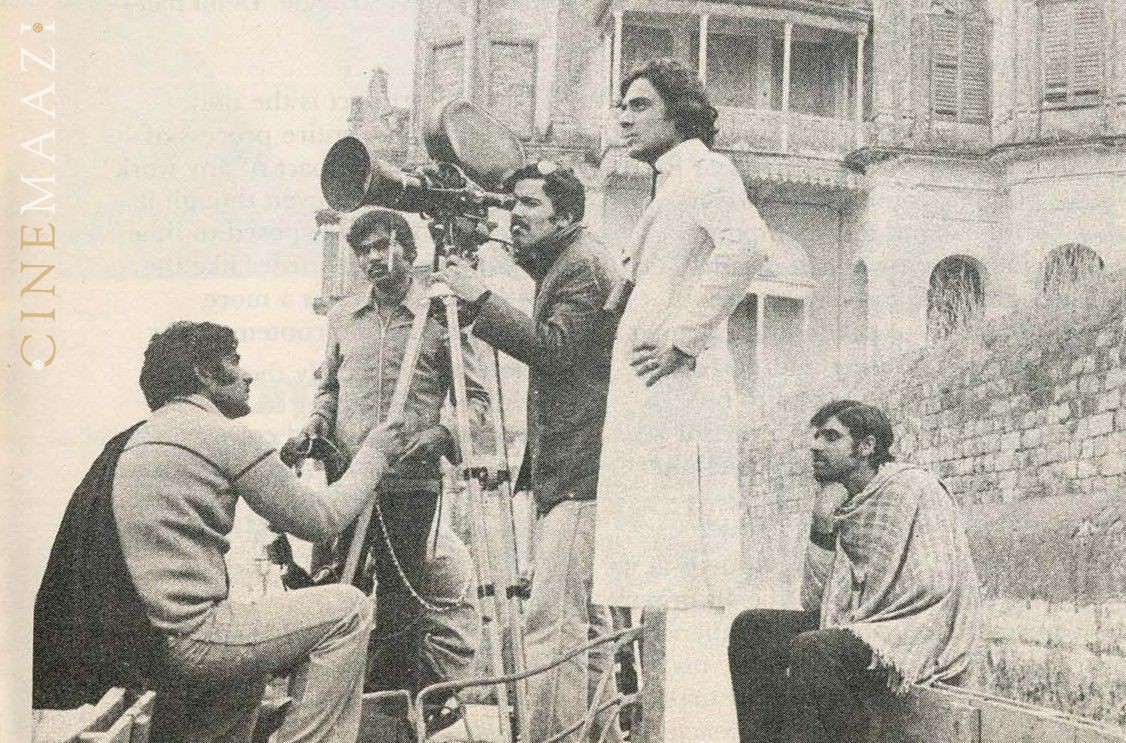 Muzaffar Ali on location in Kotwara for his first film Gaman. Image Courtesy: The India Magazine, June 1981.
The making of 'Umrao Jaan' in Lucknow by Muzaffar Ali

Umrao Jaan, based on the famous Urdu Novel Umrao Ada, by Mirza Hadi Ruswa, the story courtesan of Lucknow, set in the mid-nineteenth century when Avadh was at its height. Ironically, this was also the moment of its disintegration.
Interwoven into the colourful tapestry of the light and shade of the refined decadence of the period, is the life of a woman who, while being a victim of the most adverse circumstances, emerges as a mature, highly cultured human being, an accomplished poetess in her own right.
Umrao is a young girl who is abducted from her simple and happy home in Faizabad and sold to a tawaif of Lucknow, Khanum Saheb. She is then trained in music dance and letters, and takes the city by storm. She has a wide range of experience: her first love affair with the sensitive Nawab Sultan; her escapades with Faiz Ali, a notorious dacoit; her attempts to free herself from her bondage in Lucknow, and many more.
And it is through her poetry - ghazals - that these experiences are transcended and translated into an expression of beauty.

For the first time now I realize what it means to live year to year. Till last year in Air-India, I had just been making yearly plans, yearly budgets, dividing projects over forthcoming years, dividing the year into segments.
Having left Air-India, the whole thing now makes sense. I have now to divide my life into years - into projects - into jobs and experiences and develop on a continuous basis a meaningful relationship with society through a new medium.

Life is predominantly in the range of browns. Green is the first natural additive. Its first signs of growth and mortality. Colours are added to life in a society to give specific meaning in specific contexts. These change with socio-economic changes in the society's fabric.

Last year we began the shooting of UMRAO JAAN on 14th January at Mughal Sahib's Imambara in Lucknow. It was a simple ceremony of 'Nazar'.

On 14th February 1978, I began the shooting of my first film GAMAN in my village Kotwara.

"GAMAN" was a totally different experience. I had set out certain objectives and I achieved them. Both in terms of the nature of the film and process of work.

In "UMRAO JAAN" the objectives were more or less the same but the scale had been increased considerably. 'UMRAO JAAN' to me was more than a sum of her episodes. It was a visual documentation of the life-style of mid-nineteenth century Lucknow and the development of a person in this society - in this particular case, a young helpless girl. Lucknow society had reached its cultural zenith and was ridden with contradictions. Umrao therefore finds her way through life through a maze of characters, each depicting the particular characteristics and contradictions of his or her respective class. Her life is therefore shaped by the values of society and her mind evolves with an understanding of these values.

In June '79, I read "UMRAO JAAN" - recorded the story on a cassette in Salma Siddiqi's voice. Listened to the tape over and over again. Underlined the parts that moved me and were cinematically interesting and based on these notes worked out a screenplay and the treatment of the character using Shahryar's poetry which I have felt intensely and have also used in GAMAN, to chart her development.

In creation it is difficult to reach the level of a woman. Artistic creation is organic - it awakens our sense of the real, in the full meaning of the word. I just find traces of it because of my mother and I need the help of a woman to create art - and understanding of reality. Rekha is only a surface carrier - Subhashini is very important for this creation and I hope an equilibrium can be reached in the process of creation. The process of creation is for the man and the society - an attempt to make him beautiful and the world a better place to live in. The film reflects a kind of feminity which may even be a very special style of the film. After having evolved the story and the character of the film along with my writers Shama Zaidi and Javed Siddiqi, I got involved with the physical aspect of the film such as costumes, locations, special properties, furnishings, etc. Almost 20 different locations were required for various parts of the film. Different parts of the different houses with different feelings, I prepared a complete breakdown of these requirements and left for Lucknow on 11th August. The object of the trip besides photographing and selecting locations, was to look for special properties and costumes of the period and do some basic casting from among the local people of Lucknow.

Amiran (Umrao Jaan) was born and brought up in a mohalla in Faizabad. I went to Faizabad. I did locate that may have been her mohalla but the entire area was totally modernised. I therefore had to look around for a substitute in the vicinity of Lucknow. What I wanted was an earthly environment with both a living warmth and nostalgic quality which could suit the requirements of the scenes and bring out the feeling of the period.

Kotwara: my first experience of space, light, sound, season and people. A child of today needs noise - more rhythm. He is a fish out of water in silence.


Shooting in the studio was something I was really looking forward to. Unfortunately, at the same time, my art director Bansi Chandra Gupta left me. This posed a very difficult situation as I had already briefed him - taken him to Lucknow and he had the experience of working with the architecture in 'Shatranj Ke Khilari'. I therefore picked up courage, did a range of design and gave them to Manzoor, a very capable art director to execute. As he had not been to Lucknow the entire interior work and detailing was on my head.

The door opens
And a gentle breeze
Blows across your face
A thought crosses the room
Amidst the sound of traffic
Through the fumes
Comes our clear and gentle voice
Like the morning light on green leaves
A million engines
A million Deadlines
And miles of forest sleep.
(16th May '79)

10.10 P.M. - Gomti Express - It is bitterly cold. I am going to a cold home. My father wants to discuss our approach to the copyright case. Another very strange obstacle. Ruswa died 50 years ago 21st October. Strangely the day I was born.

My attitude to the making of Umrao Jaan. I can get baffled. I can get nervous, tense, compromise. Time now flows extremely productively. Money flows like water. People come and go. They work. They do not work. Rekha, her costumes, her distractions etc. People gape. Ultimately there is something greater and stronger than you that makes things happen through you. It is your larger vision of the project. Your human understanding of situations and your determinations. Finally, your sense of aesthetics-all what is known as samajh. I have to continually strengthen my samajh and at no time let these elements fail you. It's what you create that remains in the minds of the people - to give them strength that is stronger than them - parents - Ali - Picasso - Le Corbusier - Too much he had said too well.

"For Le Corbusier each day is a discipline to which he brings a trained moral; he tries to qualify the indefinable. He approaches each day as an occasion in which he regulates his efforts suiting the time of the day and his relative freshness, to the importance of his duty. Each day is consciously looked upon as an opportunity to build something else on his present foundation".

Every society has an organic approach to aesthetics. It blends the social and economic needs with the environment. The discord is created by the changing socio-economic conditions. Politics is important for Arts. Art is arbitrary. Politics is positive. Therefore, Politics provides positiveness to Art. Politics however, most importantly, has to be integrated into Art in such a way that it helps Art to operate on a purely human, emotional and a highly creative level, without making its obvious presence felt in its raw form.

Ganga Jamuna Express returns to Delhi. 7.30 a.m. - a heavy fog. The train goes through the suburban slums of Shahdara over Jamuna bridge.

Have I worked sufficiently close with the actors? Yes, I have. As much as I needed to. It was more difficult to create a camera style and an environment than characters themselves - The actors were intelligent, knew their roles and were expected to behave as people in those actual situations within the timing of the scene.

The final product is the only measures of the entire process of evolution. The impact of any work of art is transient even though it may stand solidly exposed to time and nature for centuries like the Taj Mahal. Film has a more intense impact on contemporary society and it is truly the art of our times -, reflecting its approach to time and consumerism. In itself it is a mirror of the dialectical process of life. It is a process of change - within time.

"The shade of an old office building
The reflected morning light
An assortment of images
Probables
Professions
Purposes
A gentle breeze of an invisible sea."

This article is a reproduction of the original that appeared in the June 1981 edition of the India Magazine.
280 views