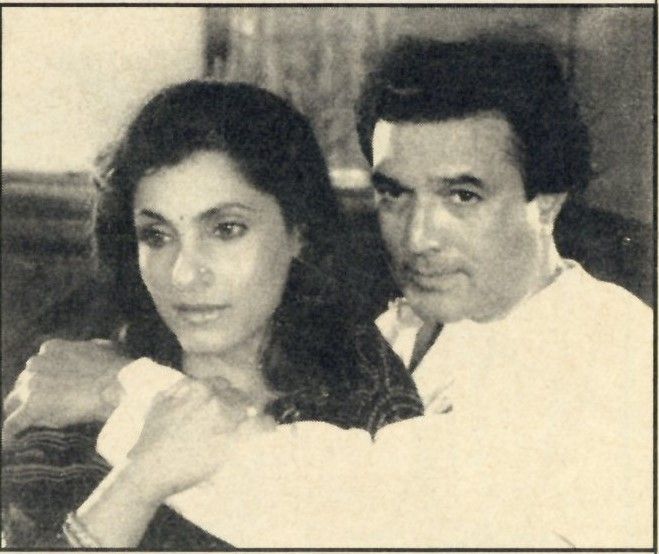 Success and fame, sometimes bring people closer and sometimes draw them apart. Anju Mahendru drifted away from me due to my success. Too proud to be a part of my coterie, she went inward and turned distant. Both socially and emotionally, we grew apart. Looking back I feel it was nobody's fault. None of us had anticipated this kind of success to happen to me.

Neither of us knew how to handle it. My success brought a lot of mixed emotions and successively a lot of changes. All this was very disturbing. Ideally, we should have sat down and sorted out our confusions. We didn't.

Around this time, I met Dimple Kapadia. This was some time in the late 70s. She was accompanying her father to a film party. "Meet my daughter. Kaka. She is your fan" Chunibhai told me. A very beautiful, shy face stared at me. I shook hands with her, asked her a few questions like film stars do and that's all. The second time I met her was on my sets of Aan Milo Sajna (1970). She was visiting somebody. I don't remember, who. But the father and daughter spent a lot of time, chatting with me in my room. When they left, they invited me for a meal, at their home.

Between Dimple and me, we had just three meetings, but the chemistry was already at work. We both felt attracted and even though the age gap was considerable, I must confess, I was thinking of the long term.

Achha toh hum chalte hain from the film Aan Milo Sajna (1970) is an evergreen hit sung by Lata Mangeshkar and Kishore Kumar
In '71, I heard that Dimple was entering films. Raj Kapoor had signed her for three films and Manmohan Desai was contemplating signing her opposite me in Roti (1974). Bobby (1973) was a quickie and the film was completed within a year During this year, I met Dimple often. After beginning to work, she was changing and it was interesting to watch her blossom. One day, I had taken her for a drive at night and we stopped by the beach for a walk. "Will you marry me?" I asked her "If you ask me to," she replied. The rest of course is history.

It was the most talked-about marriage So much has been written about it, that I don't want to repeat the details. After marriage, my first film to release was Daag (1973). It was the first of the extramarital series that followed. A year later, however, 73-74, on the whole, proved to be a difficult phase! At home, there were new adjustments. And at work, the chessboard was being set for a new round of the game. It was a distressing phase. My films were flopping at the box-office and with each flop, one more person deserted me. Even my so-called friends and colleagues.

My decline came about just as suddenly as my success. Out of the blue. And this was expected after the kind of insignificant films I had been signing, left, right and centre. I was paying the price for not being able to refuse producers. Chhoti Bahu (1971), Badnaam Farishtey (1971), Mere Jeevan Saathi (1972), Shehzada (1972), Maalik (1972) went away without a whimper. Slowly but surely I realised that people's attitude towards me was changing. I didn'tlike it. I wasn't used to failure and was finding it difficult to accept it. I felt vulnerable and in need of assurance. I wanted to be told that it was a phase and that this too would pass. Not from those involved with me professionally, but from those who were my friends. It took me some time to realise however that there were no friends!

Dimple was there, but she was too young, too inexperienced to handle such a crisis. Also, to be fair to her, I did not help her. Had I surrendered to her, she would have coped better than she did. But I withdrew. For fourteen months, I built a wall around me, stopped trusting people, stopped signing new films. Every day, my self-esteem was eroding a little more. Those days I was forever preoccupied ...forever suicidal. Once, I even attempted walking into the sea, but at the last minute, pulled myself out of the depression. "I will not die a failure," I promised myself. "I don't want people to say Rajesh Khanna was a coward."

In early '74, I must have been the most lonely man around. Lonely, irritable, persecuted. Not a very attractive frame of mind to be in, but then what to do? I sat all by myself, brooding, thinking. The truth was I could not come to terms with my failure. Had somebody intelligent and experienced talked to me, made me understand the games of filmdom, I could have been consoled. But there was no such consolation.
And then it happened. Like it happens in films. Just when I was at the end of my tether, optimism came in the form of my three releases.Aap Ki Kasam (1974), Roti and Prem Nagar. (1974). All three were major hits. Nobody had expected them to be, after the lean phase, I was going through. But the hat-trick restored my confidence and the confidence producers had in me. I began to feel better. No more was I edgy and irritable as I used to be.

Later, everyone told me that these lean phases happen to everyone at the top. Raj Kapoor, Dilip Kumar, Dev Anand. So why must Rajesh Khanna be an exception? Exactly. Only how come nobody thought of saying these wise words to me when I was going through the crisis. Why now, when the worst was over? With experience, I have learnt, however, that when one is going through a crisis, no logic, no explanation, no advice helps. At that time you have to bear your emotional cross. Just as I bore it and I am not ashamed to admit that I did. I am an emotional man. Only if you are emotional, can you project emotions on screen. For us actors, unfortunately, we deal with emotions all the time, so much so, that sometimes, this affects our personal life. There are times when we ought to be expressing our feelings but we don't. And sometimes, we do the reverse. It is not easy coping with a star It must be an accumulation of many such similar incidents that ultimately set the rot in my relationship with Dimple, when she finally decided to leave Aashirwad in the early 80s, exactly ten years after our marriage.

Our split seemed the most obvious solution at that time. But relationships don't break just because you shift addresses, she is still my wife. The mother of my two lovely daughters and no one can change that. Sometimes, pain builds walls between people. But when you are distanced, you tend to think more clearly Our relationship improved after she moved away from here. Now we are both mature and less emotional when dealing with the problem.

With my daughters, there was never any question of changing. Dimple never came in the way of our relationship. She did not poison my kids against me. I am proud of my daughters. They are strong and sensible girls. In their adolescence, I get to watch mine and Dimple's childhood. Chinky the younger one, is still treated like a kid in the family while Tina, the elder one is treated like an adult. I often ask what they will become when they grow up. It is their life and I don't want to interfere. They are still young, I think, and time will make its own decisions. If either of them wants to join films, I will not raise objections. How can I, considering both their parents work in films. I stopped their mother from continuing in films, I agree, but that is a different matter altogether. One feels differently at different times.

Today, somehow, I am not averse to Dimple working in films. But it has taken me a long time to get used to the idea. She is doing my home production, Jai Shiv Shankar (1990), to be released sometime this year. An important turning point for me. I am working with Dimple for the first time and also with my old friend, Nikki (Anju Mahendru), who assists me in production.

Nikki and I had been out of touch for almost 10 years and then a common friend, very casually and very simply made us patch up. It was as if the 10 years didn't exist. A rather strange coming together, but not unrealistic. I'd say, today Anju and I are even better friends than what we were ten years ago. Age mellows you and one accepts each other with their shortcomings. She assists me in my work, looks after my office administration. We share a comfortable friendship.

In contrast, shooting with Dimple, I did feel awkward initially, but I think she was more nervous than I was. Two completely confident people at the Jai Shiv Shankar mahurat, of course, were my two daughters, Tina and Chinky.

This article was originally published in a Junior G's supplementary issue -Rajesh Khanna: Echoes Of An Era- issue. The images used in the feature are taken from Cinemaazi archive and the original article.
1098 views