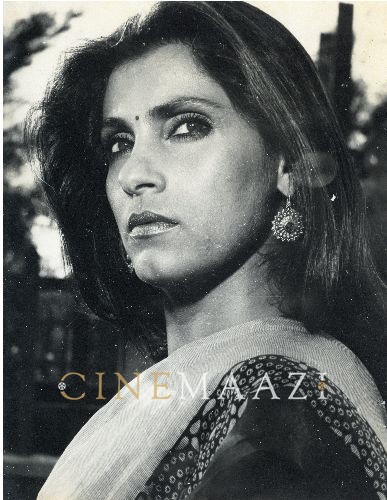 One of the most stunning and talented actresses of the Hindi film screen, Dimple Kapadia has been hailed for her instinctive, spontaneous and intelligent performances. She has proved on multiple occasions her willingness to look less attractive in the quest to convincingly express anguish and emotion. Discovered at 14 by Raj Kapoor, she became the national sweetheart with her debut, the hit teen romance Bobby (1973). Even before the film could release, she married reigning superstar Rajesh Khanna after a whirlwind courtship and quit acting. Returning to films in 1984, two years after the breakdown of her marriage, she made a comeback with Saagar (1985). She went on to establish herself as a leading female actor, impressing with her acting prowess and considerable range. Starring in women-centric roles in action films, she also embraced more dramatic roles in mainstream as well as parallel cinema. Winning kudos for her performances in Kaash (1987), Drishti (1990), Lekin... (1991), and Rudaali (1993), she also impressed in character roles in Gardish (1993) and Krantiveer (1994). She has won appreciation for her performances in Dil Chahta Hai (2001), Leela (2002), Being Cyrus (2006), Luck by Chance (2009), Cocktail (2012), Finding Fanny (2014), as well as the Hollywood thriller Tenet (2020). Honoured with the National Film Award for Best Actress for her role as a professional mourner in Rudaali, she has also won Filmfare awards for Best Actress for Bobby, Saagar, Rudaali (Critics’ Awards) and Krantiveer.

Born Ameena on 8 June, 1957 in Bombay, she was the eldest of four children born to Bitty—also known as Betty—and Chunibhai Kapadia, a Gujarati businessman. Chunibhai hailed from an Ismaili Khoja family, whose members had embraced Hinduism, although they still regarded Aga Khan as their religious mentor. Studying at St Joseph's Convent High School, Dimple was aided in her dream of acting by her father, who moved in film circles. After being nearly cast in H S Rawail's Sunghursh (1968) and rejecting Hrishikesh Mukherjee's Guddi (1970), her name was suggested to Raj Kapoor, who was scouting for a new female lead for his teen romance. Performing a screen test for Kapoor at the age of 14, her spontaneity and improvisation won her the part. She made her debut as Bobby Braganza, the teen daughter of a Christian fisherman from Goa, opposite Kapoor's son Rishi Kapoor who played Raj Nath, the son of a wealthy Hindu businessman. The film depicted their love affair against a backdrop of parental disapproval and class prejudice. The film, which released in September 1973, became a super hit. Dimple was hailed for her natural ease and freshness onscreen, her innocence and candour redefining glamour and grace. Her line ‘Mujhse dosti karoge?’ became a rage, as did her red bikini, minis and polka-dotted knotted shirts.

One would have expected her to become the toast of the industry, the first choice for every worthy film. However, six months before Bobby released, Dimple, all of 15, had wed screen sensation Rajesh Khanna, aged 30. Married on 27 March, 1973 at her father’s Juhu bungalow, she quit her career on her husband’s bidding, to focus on home and hearth. With daughter Twinkle born in 1974, followed by Rinke in 1977, she appeared to live a fairytale. The reality couldn’t be further: it was apparently a marriage wracked by inequality and infidelity. Refusing to endure the ‘farce’, as she called it, any more, Dimple separated from Khanna in April 1982 and returned with her two daughters to her parental home. Two years later she returned to the big screen.

Determined to prove her own capabilities to herself, she was to make her comeback with Ramesh Sippy’s love triangle Saagar. However, as the film’s release was delayed by a year, her other films such as the woman-centric revenge film Zakhmi Sher (1984) in which she essayed an avenging police inspector, Manzil Manzil (1984), Aitbaar (1985) and Arjun (1985) hit the screens earlier. While she received positive reviews for her performance in Aitbaar as a wealthy young woman whose avaricious husband plans to murder her, she had her first commercial success in the actioner Arjun opposite Sunny Deol. It was Saagar, which released August 1985, that truly brought her back with a bang—the film was hailed as a paen to her incredible beauty as she delivered a solid performance as a young woman torn between her friend played by Kamal Haasan, and the man she loves essayed by Rishi Kapoor. Chosen as India's official entry to the 58th Academy Awards for Best Foreign Language Film, Saagar also won Dimple her second Filmfare Best Actress award.

A string of films that lacked artistic merit was followed by Mahesh Bhatt’s Kaash (1987), which depicted the downslide of a once popular actor, the breakdown of his marriage, and the couple’s rediscovery of themselves and each other in the shadow of their son’s imminent death. Dimple was praised by The Illustrated Weekly of India Editor Pritish Nandy for ‘achieving the impossible’. Nandy wrote, “Bereft of her glitzy make-up, glamour and filmi mannerisms, she comes alive as never before: beautiful, sensitive, intense. You almost feel you've discovered a new actress on the screen.” She received kudos for her depiction of stoic determination and touching vulnerability, in a performance that was believable and sympathetic.

Propelled by ‘an inner yearning to exhibit her best potential’, Kapadia featured in parallel cinema in the 1990s. Govind Nihalani’s Drishti (1990) saw her pair with Shekhar Kapur in a depiction of a married city couple’s trials and tribulations, extramarital affairs, divorce, and reconciliation. The film won the Best Hindi Film award at the 38th National Film Awards, while Dimple was hailed for her intelligent portrayal of the vulnerable, intense career woman, Sandhya. She was declared Best Actress (Hindi) of the year by the Bengal Film Journalists' Association. Gulzar’s romantic mystery Lekin... (1991), based on Tagore’s short story Hungry Stones, saw her essay a restless spirit who haunts an ancient palace and appears in the presence of an architect played by Vinod Khanna throughout his work visit in Rajasthan. Kapadia considered the role a personal favourite, and wished she had more screen time. She won critical acclaim as a young widow in the military drama Prahaar (1991), as well as for her role as the principled office receptionist in the Sunny Deol-actioner Narsimha (1991), the political drama Haque (1991) in which she played an orthodox Hindu woman who defies her husband after years of subservience, Mahesh Bhatt’s Marg (1992) which explored power politics within an ashram. Her role as Uma, a prostitute by choice, was so intense that it apparently left Kapadia on the verge of an emotional breakdown. The year 1993 brought one of her career’s best—Kalpana Lajmi’s Rudaali. She brought credibility as well a larger-than-life quality to her performance as Shanichari, a lonely hardened Rajasthani woman who has never cried during any of the many misfortunes she has faced in life, and who is challenged with a new job as a professional mourner. Feted for the dignity and conviction she brought to her role, she bagged the Filmfare Critics Award for Best Performance, as well as Best Actress at the Asia-Pacific Film Festival and the International Film Festival in Damascus. Essaying a street prostitute whose husband and child are burnt alive in Gardish (1993), she took on the Bengali drama, Mrinal Sen’s Antareen (1993), in which she played a woman caught in a loveless marriage. The film was named Best Bengali Film at the 41st National Film Awards. Playing journalist Meghna Dixit, a rape victim who persuades a cynical man played by Nana Patekar to fight for justice for those around him, her performance in Krantiveer (1994) won Kapadia her fourth Filmfare Award, this time for Best Supporting Actress.

She made waves again in Farhan Akhtar's Dil Chahta Hai (2001), essaying the role of a middle-aged divorced alcoholic woman who is not allowed to meet her daughter. Her story is told through a much younger male character played by Akshaye Khanna, who falls deeply in love with her. Though the role was brief and somewhat under-developed, Kapadia was praised for presenting a poignant study of loneliness. She went on to shine in the family melodrama Leela (2002), an American production that saw her essay a lonely visiting professor in California who rediscovers life. Her performance as the neurotic and unfaithful wife, who has an affair with a young drifter who enters their house as an assistant, in the English language black comedy Being Cyrus (2006) also grabbed attention.

Kapadia won appreciation in character roles such as the tough as nails ex-superstar in Zoya Akhtar's Luck by Chance (2009), the hero’s asthmatic mother in Dabangg (2010), the Irani café owner who falls in love with her lawyer who is fighting to save her business from developers in Tum Milo Toh Sahi (2010), the hero’s loud Punjabi mother in Cocktail (2012), the conceited by well-meaning mother-in-law in Finding Fanny (2014), and the divorcee who reluctantly entrusts her niece with taking care of her house while she is away in What The Fish (2013).

Essaying cameos in films like Welcome Back (2015) and Dabangg 3 (2019), Kapadia went on to appear in the comedy-drama Angrezi Medium (2020). She played a strict store owner estranged from her daughter in this Homi Adajania directorial. Christopher Nolan's spy thriller Tenet (2020) saw her win praise for a performance which the Chicago Sun-Times critic described as ‘quietly stealing every scene she is in’.

In a career trajectory that is distinct and unique, Dimple Kapadia has fought her way to success by committing to serious and challenging work. Whether her return to films after a failed marriage, the constant comparison to her Bobby adulation, and her struggle to be taken seriously as an actor, she has walked the road less taken and walked it with guts and conviction. She is admired for being a mainstream actress who refused to play ‘a pretty prop in hero-oriented films’, for becoming associated with a new wave of women-centred revenge films, for drawing from her own personal experiences to play challenging parts, for performing her own stunts, for not turning into a victim of her own success, and for choosing quality over commercial considerations. She often willingly works with new filmmakers, impressed by their enthusiasm and creativity. All this and a face that has been described as akin to Sophia Loren’s— “A landscape of desolation”. Dimple Kapadia remains a spontaneous actor who is guided by instinct.

On the personal front, Dimple and Rajesh Khanna never divorced, though they did not reunite either. She would accompany him to parties occasionally, had acted opposite him in the unreleased film Jai Shiv Shankar, and even campaigned for Khanna’s election to the Indian National Congress. When Khanna fell ill in early 2012, Kapadia stayed by his side caring for him until his death on 18 July that year. Both their daughters Twinkle and Rinke joined the film industry as actresses.

Kapadia also founded The Faraway Tree, a company that sells candles that she designs. A known art lover, she has revealed that she finds art fascinating, and that art is what keeps her calm.