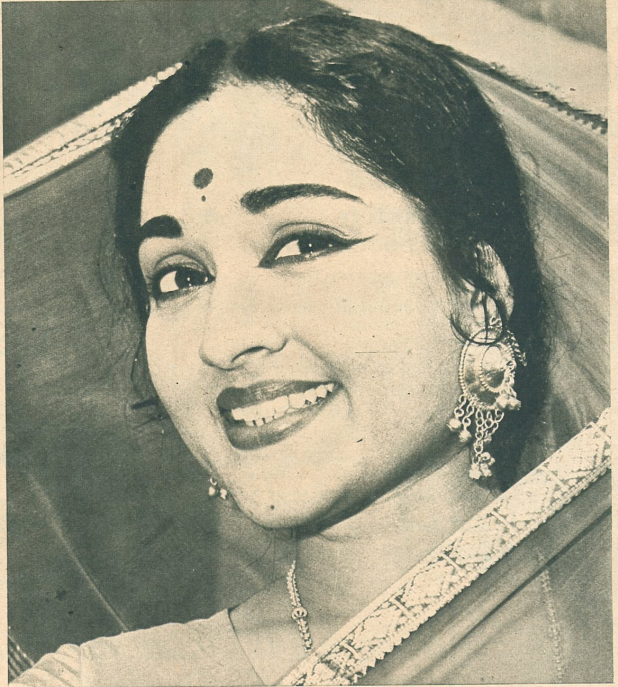 Glamorous star Vyjayanthimala, who writes about the "Big Three" of Indian films-Dilip Kumar, Raj Kapoor and Dev Anand.
This article was written by Vyjayanthimala.

When "Filmfare" asked me to write about the "Big Three" of our films - Dilip Kumar, Raj Kapoor and Dev Anand - I felt that I was quite qualified for the task, for I have worked with all three. But now I realise that I may not be able to do them equal justice, because I have worked in more films with Dilip than with either of the other two. Also, the number of days I have worked so far with Raj in "Bahurupiya" are far fewer than what I devoted to "Amar Deep," playing opposite Dev.

An old Tamil proverb says, "One grain is enough to show if the entire rice in the utensil is cooked." Similarly, small incidents and trifling moments are enough to reveal one's nature. However, in setting down my impressions of my three colleagues, I hope to be pardoned for judging them on "insufficient evidence."
I have co-starred with Dilip in four or five films and each picture confirmed my opinion that he is one of the finest artists I have known. When I was told that Dilip was to be my co-star in "Devdas," our first film together, I was filled with doubts and misgivings.


I became more confused when I was asked to be "very careful" while working with Dilip. They said he was high-strung, temperamental and moody. But when I started working with him, I found that he was none of these awful things.

Considerate, understanding and helpful, Dilip instills his co-star with enthusiasm he himself has for work. His spontaneity puts you at once at your ease, and yet draws out from your best efforts.

Very serious on the sets, he is gay and full of fun away from them.  "All work and no play," he often quips with a smile, "makes ANYONE a dull boy!"

Not the least of Dilip's qualities is his appreciation of the good points of his colleagues. In "Ganga Jamuna" there is a scene in which I have to "die" in the hero's arms. But finding that our troubles are over and we are about to be reunited, I cry out to the hero, "I want to live! I want to live! Please don't let me die." Dilip, playing the hero, comforts me, but he knows that I am dying.

Dilip paid me a handsome compliment afterwards. "I could never have done that scene so well without your co-operation," he said, adding warmly that I was the Ingrid Bergman of the Indian Screen.

Serious at work, Dilip is also light-hearted, even boyish sometimes. He has a keen sense of humour and sees the joke in the most awkward moments-for example, his famous "grin". The "grin," Dilip explains, appears at the oddest times-when he is engaged in a serious discussion or in the middle of an important scene. He says it "starts" at the corner of his mouth.

"I feel it coming now," Dilip used to whisper to me in the middle of a sequence, and then there is nothing to do but wait till it passes off. Those who do not know anything about the "grin" are completely mystified by Dilip's unexpected expression at that moment.

While working in "Madhumati," in which I played a simple village girl full of innocent fun and gaiety, Dilip was never tired of marvelling at my acting.

"Light-hearted, devil-may-care roles are more difficult than straight, dramatic parts," he would say. "It is easier to make people cry than to make them laugh."

For much of the success of our films, I must thank Dilip. His constant help, encouragement and friendliness enabled me to give my best in my performances. It has been a real pleasure as well as an experience working with Dilip.

Two things come to my mind the moment I talk of Dev Anand - his delight at my height ("Thank goodness, I don't have to stoop!") and his remark when we met as co-stars on the sets of "Amar Deep." "We should have worked together long ago," he had said. "Anyway, better late than never!"


Dev is a very painstaking artist. Before enacting a scene, he asks the director and script writer to explain the sequence that preceded as well as the one that is to follow. He checks up on continuity, the make-up, the relation of other artists in the scene towards his own role and other details.

After one or two rehearsals, when he feels he is ready for the "shot," he would run to me, his co-star, and tilting his head a little, ask: "Finale?" And, if I was not quite sure of myself, I would say, "No, Dev, one more rehearsal, please." He would immediately agree to go through the scene all over again. Somehow the word seemed so apt when he uttered it and all of us used it on the sets. We would call out "Finale" the moment we felt we were ready for a "take."

Engrossed in a scene, he is likely to forget everything else. This reminds me of an amusing incident during the filming of "Amar Deep." For a song sequence Dev and I had to stroll on the sands, singing the duet, and his arm thrown carelessly round my shoulders.

All went well at the beginning, but with my feet sinking into the sands, I soon found that I could not keep pace with him. Dev, however, was unaware of my predicament, and went on gaily with the scene.

Blessed with a charm that captivates, he tackles each scene, serious, light or emotional, with that dash of subtlety that is typical of him.

It was from Dev that I learnt that acting is depiction of reality. "Put over a scene as you would do in real life. This is the quintessence of acting."

Now that we are going to star again in "Mohabbat Isko Kehte Hain," I am looking forward to his stimulating company. Typical of Dev's warm friendliness is his hearty welcome to me on the sets: "He-llo Pa-pa!"

Now Raj Kapoor. But I must admit at the very beginning that I have worked with Raj for only three days or so in "Bahurupiya." Such a short time is hardly enough to get to know anyone, least of all an artist like Raj.


I had met Raj at social gatherings and had thought that he was always full of fun and high spirits. It was, therefore, a shock to me to see that he was quite the reverse when I met him for the first time on the sets.

Perhaps he was being formal with me because we had just met as co-stars; perhaps it was only a response to my own polite formality.

However, the first thing he did to thaw the atmosphere was to comment on my height. Unlike Dev, who was happy about it, Raj said with feigned consternation, "Don't tell me I have to look up at my heroine!" Then lamenting, "Why am I so short, when all the rest of the Kapoor family are so tall?" he made us all laugh.
A versatile artist, Raj is at home in every type of role. He can depict the entire range of emotions, and he is as good in comic scenes as he is in dramatic ones. I admire Raj in dramatic roles, and I can never forget the intense emotion he imparted to his performance in "Bawre Nain," one of his early films.
Working with him in a song sequence, I saw that he has an excellent sense of rhythm. He is very quick in grasping a melody and synchronising his movements to it.

While providing lip-movement to the song, I hummed it under my breath. Raj noticed this and complimented me on my voice, saying, "You sing very well."

A versatile artist, Raj is at home in every type of role. He can depict the entire range of emotions, and he is as good in comic scenes as he is in dramatic ones. I admire Raj in dramatic roles, and I can never forget the intense emotion he imparted to his performance in "Bawre Nain," one of his early films.

Few artists can aspire to achieve his whole-hearted response to a role, his economy of expression in enacting emotional scenes or his ability to invoke sympathy even when he makes one laugh.
***
This article is a reproduction of the original that appeared in the Filmfare, November 6, 1959 edition (pp. 25, 27).
275 views

Other Articles by Filmfare Magazine

Vinod Khanna - The Defiant One