FAITH, they say, can move mountains. Faith is an intangible quantity. Love, too, is intangible. When the two intangibles are together invested in a person, the travail of his soul can move even the gods to tears.

Love, abided by faith, transcends time and space. It knows no death, knows not any ceasing-to-be. Ages are like moments, physical barriers cease to exist. Such was the love found by Raj and Gouran : nurtured in the lap of the hills which, by themselves, are sentinels of eternity.

The two had grown up from childhood into youth, loving each other as no two mortals ever did. The rift in the peaceful lute of their love was Jeevan, a mutual friend, who cast evil eyes on Gouran. When, one day, he assaulted Gouran, Raj came to her rescue. In the scuffle that ensued, Jeevan's foot slipped accidentally on the edge of the cliff and he went hurtling down into space. The law took it for granted that Raj had pushed him over, and pushed Raj behind the bars for three years. Gouran promised to wait for Raj... "Three years? Three lives, if need be!" she said. "There is no power on earth can separate us!" ...And she waited. But her father (who was opposed to the very idea of her marrying a branded 'criminal') tried to wed her off to a young man of his own choice.

Gouran resisted. Her father tried to reason with her, but to no avail. Standing by the window of her room, with the toy in her hand that was the symbol of Raj's love for her, Gouran had been far away in her thoughts. As her father approached her, to persuade her the better, she suddenly fell from the window into the lake below.

No one told Raj about the disappearance of Gouran. Her body had not been recovered from the lake, there was in fact no trace of it! But when they did tell him, ...after his release from prison, ...he was not at all shocked. He refused to believe that she could be dead. He kept looking for her at each familiar rendezvous : and was not disappointed when he did not find her. He came upon the toy, though : the toy he had made for her in their childhood, the toy that was the symbol of their love. And he knew that she would come : he had immense faith in the indestructibility of their love. Time nor space was of any consequence to him.

Transcending these barriers, unshackled love rewarded him ultimately with the presence of Gouran. But while his spirit surged, those around him were sceptical. They did not believe because they could not see, touch or hear or talk to Gouran : all of which Raj did! They derided his love, his faith.

"If the moon be hidden behind the clouds, one cannot say it is not there at all!" Raj reasoned with his friends. His faith was undying. And the love Gouran bore him was beyond obliteration by death. The travail of their souls could move even the gods to tears : as it did!

Love and faith find ultimate fulfilment in the hauntingly simple and beautiful story of "Ashiana", the denouement of which may be seen on the screen. 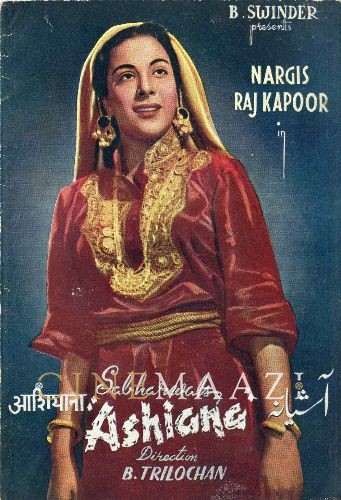