Lala Seth & his brother Munna (Siddarth) & Samir get angry on his, they three of them become enemy to Goutam& swear revenge, they try to kidnap Goutam to take revenge but are beaten and sent running away by Goutam's friend Ramya (Bhatkar) and Goutams other four friend.

On this Samir gets more wild and in rage goes to Suman's college and burns her alive in front of all students, Suman dies, Samir & his gang are then supported by a Police Inspector Wagh (DilipDhawan) who frightens all the eye witnesses in Suman's murder against giving witness.

Goutam brings Suman's burnt dead body home, on seeing this Kashinath becomes mad, unable to take the shock, Goutam also gets a shock. He and his friends vouch on Samir and one day Goutam kills Samir. Now Goutam is chased by Police as well as Lala's men together, ultimately Goutam is arrested, the day Goutam is to be produced before the Judge in Court, Lala's men reach there to killGoutam in the Court itself. But Goutam notices them before, He gives slip to HavaldarGawde (VijuKhote) & escapes from the Court unnoticed by Lala's men. In this way in various attemptGoutam escapes from Lala's clutches, Lala&Munna get more wild, they kill Kashinath, and when Goutam comes to lit his funeral pure in the cemetery. Lala's men attack and injure Goutam badly who is rushed to the hospital by Goutam's friend, Lala's men attack there too. Goutam's friends bring Goutam to Gita's house, where Gita take care of Goutam who recovers& kill Munna.

Goutam comes in Police records and is chased by a honest inspector Kulkarni (VikramGokhle) &Lala's& his men, Goutam in the meantime, marries Gita on his mother's wishes, his friends tell him to go out of Bombay and stay away till everything cools down in Police records. Gouam promises to leave after performing the sandal on the dargah of whose he is a follower.

But again things become worse when on the sandal day Lala& his men kill Bimla, the Police is on the haunt of Goutam, who forgets everything and decides to finish all evil by killing Lala's& his men. He does that, & then hands himself to the Police. 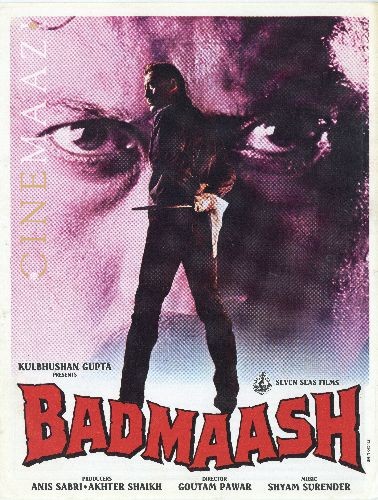