The girls were busy in the field and amongst them was Bahar, the daughter of the Mukhia of Motipur. Dewan Jorawar's soldiers were passing that way. A stone hit one of the soldiers. Bahar was arrested.

Other things were happening at Motipur. Dewan Jorawar was having arguments with the peasants about the state  ownership of land. The peasants asserted their rights of ownership. The argument led to blows and Jorawar stabbed the Mukhia. Just then Bahar was brought  over there. Jorawar's heart missed a beat on seeing her.

Nihal, brother of Bahar was devotee of pleasure. He had a fascination for Gulab, the dancer and strained every nerve to satisfy her whims. The need for money to fulfill this desire of his made him join hands with Jorawar. This treacherous deed of her brother enraged Bahar who vowed that she would lead the peasants in their movement and would remain unmarried till Jorawar and his ideas disappeared from the face of the earth. Chetan organized "Vanarasena" and joined her.

The king was only a puppet. Jorawar was the real ruler. Jorawar had the ultimate aim of becoming the king by marrying the princess who had a soft corner for Radheer, the commander of the army.

The people of Motipur met in a cave to consider the situation arising out of the detention of farmers as hostages. None came forward to lead and none could offer a suggestion. The stalemate was solved by the appearance of a masked man. He offered to lead the revolt. He was hailed by the people as Bahadur, their leader. The masked man was none but Bahar.

Reports of the exploits of Bahadur began to pour into Jorawar's ears. He decided to catch him, dead or alive.

One day the Princess went to a temple accompanied by Randheer and bodygaurds. Bahadur came there when RAndheer was away. On seeing him, the bodygaurds took to their heels. On Bahadur's demand, the princess handed over all the ornaments to him. As an explanation of his attitude, Bahadur told her that he had nothing against the king and that he desired to bring to book the sins of Jorawar and punish him. So saying he disappeared.

Randheer, who was strolling on the bank of the river saw the clothes of Bahadur. He looked round to find out their wearer. He saw Bahar bathing in the river. He asked her to come out of ther river and forced her to put on Bahadur's costumes. His efforts to pump out information about Bahadur from her proved of no avail. But cupid took possession of both of them. They fell in love with each other.

Jorawar decided to crush the revolt of the peasants by using Nihal as his tool. He made him the Mukhia. Bahadur challenged the decisionand and declared that he would personally see the king to settle this matter. Jorawar saw in this an opportunity to capture Bahadur.

Bahar managed to slip in the palace. Randheer spotted her and on hearing the approaching footsteps of the soldiers, he asked her to hide herself. Utilizing this Godsent opportunity, Bahar changed her dress and went to the Princess's room disguised as Bahadur. From there he went to the Darbar and picked up the "sanad" that was to be granted to Nihal and went away .

Exasperated, Jorawar offered a prize of Rs 5000/- for information leading to Bahadur's arrest. Chetan was arrested. All his cruel attempts to wring out information about Bahahdur from him proved futile, as Bahadur came to Chetan's rescue. 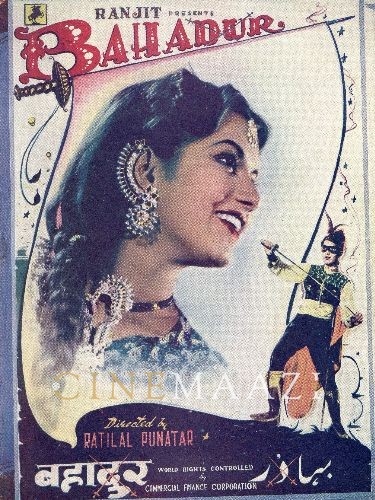