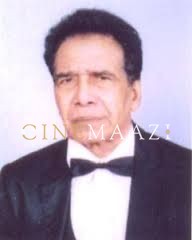 For establishing themselves in Konkani theatre, an artiste has to exhibit exceptional quality in vocals and an ability to write appropriate lyrics for his first song, before being accepted by directors as well as audiences. Eminent playwright, director and actor Prem has proved himself to be a standout in the ever-evolving Konkani theatre. Unfortunately he could not establish himself as a singer despite the sterling quality of his lyrics. But he revolutionized and updated stagecraft, characterization and dialogue, with due emphasis on realism.
Peter D' Costa, hailing from the historic village of Chandor, found a foothold in the Hindi film industry as a member of the Cine Artistes' Association. Producer-director Dhirubhai Desai offered him a blind man's role, which Peter enacted to perfection. Peter promptly re-christened himself Prem Kumar and bagged small roles in films like Mera Salam, Bandish, Hum Bhi Insan Hai, and Bahadur. The role of the Muslim priest which he enacted in Hamara Haq won him plaudits, especially for reciting the dialogues in pure Arabic.
With his rich screen experience Prem Kumar gave a new, refreshing trend to Konkani drama. He had already established his credential earlier, having written, directed and staged his own play Mhozo Put at the age of thirteen in Mumbai. The prolific playwright, with a near obsessive love for Konkani drama, has produced over 54 plays since then. His dramas thrill and stimulate, by depicting life as he sees it around him, to move the audience. His narratives move with precision and poignancy to mesmerize the audience. Deft direction, strong social themes for the plot, convincing dialogues, proper casting and realistic props make his drama the visual poetry it is expected to be. Prem Kumar has experimented with better stage setting and eye-catching visuals than drama audiences had been exposed to earlier. Among his innovative tiatr exploits, in Mortikar (Killer), he presents skillfully a murderer fleeing, by the use of back-stage projection of a road scene. Jivit Ek Sopon (Life is a dream) introduced a new trend with Betty Fernandes, doing a male role. Abdul Narayan D'Souza and Fulam ani Kantte (Flowers and Thorns) throbbed with the message of communal harmony. His Piso (Madman) is the only monologue in Konkani theatre. Maria Magdalena, besides being a classic religious presentation earned popularity for its excellent stagecraft. Prem's initiative introduced a moving stage for his magnum opus Rinn (Debt), which displayed a courtroom drama with fantastic flashbacks. The drama was further heightened with Paul Romy, the great Goan mimic, in the garb of an idiot. His productions have invariably been big-budgeted due to costly props, but have proved hits at the box office. Prem bagged over sixty trophies, including the Bandodkar Cup and Gold Medal for Vavraddi (labourer), IGP Arun Bhagat Shield, Emanuel Printing Press Shield, Cine Times Awards, Natraj Award by Vasco citizens, Konkani Cultural Association Award, Konkani Sahitya Samiti Award and Prohibition Award of the Government of Maharashtra. Besides Konkani dramas, Prem has played the stellar role in Boglant (Calumny). He is a method actor, who immerses himself completely in the role. Blessed with near photographic memory, thespian Prem could recite almost any dialogue from his past plays or films. Age has weathered him a lot, but his yearn to act still thrives, and he even believes that tiatr will witness a turn-around someday soon.
The Konkani showman has spent his life crafting Konkani drama, which hasn't been easy, particularly in times like these. Moreover, if the Konkani commercial drama has gradually evolved and achieved some standard, it was because Prem Kumar succeeded in infusing in it some of the ebullience found in the more advanced regional theatres like Marathi.