This story revolves around the lives of our two heroes Ajay (Avinash Wadhavan) and Vijay (Akshay Kumar).

Vijay is the unemployed, graduate son with only a mother (Rakhee) to name. Ajay is the son of a rich father Vishwanath Kashyap (Navin Nischol) who is the owner of a well established cold drink factory.

Vijay has been constantly abreast with the hard facts of life whereas on the other hand Ajay is flying high on his father's money.

The two heroes meet in an accident and instant hatred sparked of between the two, they fight and as a result land up in jail. Ajay being influential is released immediately, Vijay too is released eventually on the basis of strong Character and reputation of his social worker mother.

Enter a naughty, playful girl Aarti (Ayesha Julka), the love of Vijay's life who is the daughter of Daulatram (Anupam), Manager of Vishwanath's factory. Daulatram is a unique character, half blind or rather not blind... well, his increasing or decreasing eyesight is entirely his wish.

Ajay's life too is not devoid of romance. He falls in love with a stage dancer Aasha (Farheen) who is the only support of her mentally retarded sister and drunkard and conman father.

Incidently Vijay lands a job in Vishwanath's factory and impresses Vishwanath with his sincerity and hard work. Ajay is absolutely opposed to Vijay's working in his factory but is helpless and unable to do anything because of Mr. Vishwanath.

The death of Vishwanath brings a drastic storm of anxieties and worries in the life of the two heroes. Vishwanath on his deathbed had enlightened Ajay about a grave mistake he had committed earlier in his life and Vijay too comes to know about it. Vijay hold Ajay's Wealth responsible for the miseries in his life. Ajay takes up the reins of the factory and before he can oust Vijay from the job, Vijay resigns and takes up the path of revenge, of destroying Ajay and taking away everything Ajay possesses with the help of Santosh (Paresh Rawal), who is the arch rival of Mr. Vishwanath and a rogue of the first order. Santosh masterminds all activities using Vijay as the main weapon and has already bought Daulatram.

On the other hand Ajay is undergoing a lot of tension of fulfilling the promise made to his dying father, of giving half his wealth to a poor mother and a son whose life Vishwanath had spoilt. He is searching frantically for them willing to sacrifice everything in order to clear the guilt on his dead father's conscience.

What was the mistake Vishwanath had committed, what was the injustice done to the mother and son?

Will Santosh succeed in destroying Ajay through Vijay?

Will Ajay be able to find out the mother and son?

What does Daulatram do in his high voltage emotional drama?

How do Aarti and Aasha help their beloveds to achieve their respective goals?

The answers to these questions will be given in Anil Ganguli's 'DIL KI BAAZI', a sensitively handled romantic, action drama with a strong emotional base-an affair to look out for on the Silver Screen. 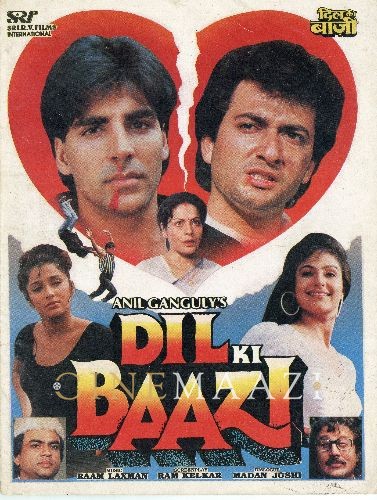