"HATHKADI" depicted the story of a man who had nothing to do with crimes. But the circumstances associate him with the criminals Madan, his aged mother, and his younger sister Lata formed a respectable middle class family of Delhi. They were quite happy with the lot. All of a sudden Lata was engaged to Santosh and they had to get married. At the eleventh hour, quite unexpectedly, Santosh's father Lala Ram Prashad demanded an exorbitant sum as dowry. Madan's flattery and his mother's persuance did not bear fruits. The marriage pandal came down before any ceremony could take place. This shock took its toll and the mother dies. In a fit of excitement, Madan took a vow that he would get Lata marry at any cost. A scoundrel friend of his exploited the situation.  Consequently, Madan was cornered by Laxmi Chand who led a double life. In appearance he was a respectable businessman, but in fact the leader of a gang operating all over the country.

Laxmichand sent Madan to Bombay in order to assist his henchman Ramesh. Santosh was also going to Bombay by the same train pursuing his ambition to be a successful detective. Fortunately or unfortunately Madan and Santosh did not know each other. They had another fellow traveller, Roopa. Though she was a C.I.D. officer she introduced herself to be touring a dancer.

Madan and Ramesh began committing a series of crimes while running a theatre. Soon the police was on the alert. The Superintendent appointed Roopa and Inspector Kapoor for investigations. When Roopa approached to secure the job of a dancer, she was completely taken aback by Madan appearing as the owner. However she secured it. She puts Madan on atrial on the very first night of her performance. Madan proved to be innocent. Both of them fell in love with each other.

At the same time Roopa was fooling Santosh by making love to him in connection with some investigations. Santosh took her seriously. One day the cat was out of the Bag. Santosh had fully made up his mind for a revenge. In the meantime Lata arrived and was staying in the room adjoining that of Santosh at the same hotel. Lata and Santosh fell in love with each other quite unaware of each other's identity.

Santosh, appearing as a deaf servant, secured a job at the residence of Madan and Ramesh. He wanted to procure some substantial proof to get them arrested.

As soon as Madan came to know about Lata's love affair, he demands Rs. fifty thousand from Laxmichand as he had promised in this respect.

Roopa and Madan's love had fully blossomed.  One day she got a tip of a dacoity to be committed. On the spot she saw the dacoit. Now there was a terrific conflict between her sense of duty and responsibility of love.

Did Laxmichand fulfil his promise? Did Madan fulfill his vow and get his sister marry?  Did Lata ever come to known of her brother's crime? Who won in the conflict of Roopa's love and duty? Whether Santosh succeeded in his ambition and revenge? If so at what price? What happened of Madan and Roopa's love?

See "HATHKADI '"for all the answers. 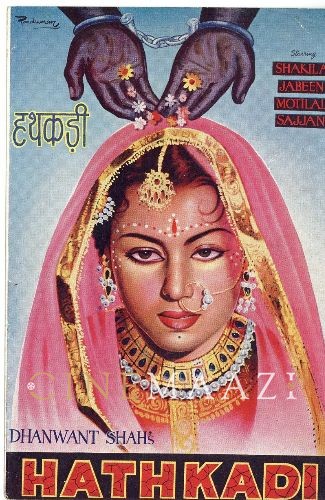