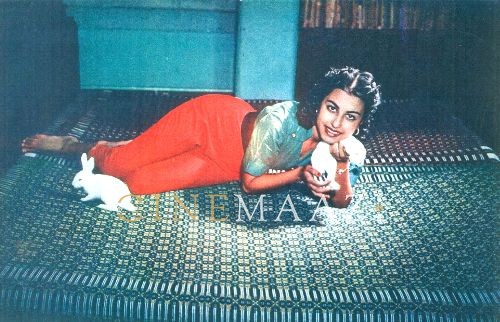 Born on 1 April, 1936 in New Delhi, she was educated in erstwhile Bombay, where her family had shifted when she was young. She caught the attention of film stars Nigar Sultana and Dilip Kumar, who were guests at a cultural function in her college. Impressed by her potential skills, they suggested to her that she pursue a career in acting. She went on to make her debut in films in 1953 with Raat Ki Rani opposite Shammi Kapoor. She played a character named Rita in the film set against a Christian background in Goa. The film was said to be an adaptation of Daphne du Maurier's Jamaica Inn, with inns, smuggling and a stranger involved. It failed at the box office due to editing issues as an entire character had to be cut out on the recommendation of the Censor Board, resulting in a disjointed final product.

She appeared in lead but mainly in supporting roles in several good films throughout the 1950s and early 1960s such as New Delhi (1956), and Raagini (1958). In the film Guzaara (1954) directed by S M Yusuf she featured alongside Karan Dewan and Paro Devi, while in Lutera (1955) she starred opposite Nasir Khan. She received true recognition with her film New Delhi (1956) where she played the role of Kishore Kumar’s sister, Nikki. The success of the film benefitted her to a good extent.

Above all, it was with the 1960 Punjabi film Chaudhary Karnail Singh that she won acclaim. She featured in the role of Naji opposite Prem Chopra in the cast that also comprised Jagdish Sethi and Madan Puri. This Krishan Kumar directorial was set in a village circa post British rule in India, a noble Sarpanch, Karnail Singh, is forced to choose sides between his son, Buta, and a Muslim couple, Shera and Naji, who want to get married amidst violent clashes between Hindus, Sikhs and Muslims before the formation of Pakistan; as well as deal with suspicious Indian Government officials. Her stirring performance in the film won her National Film Award for Best Actress. Other Punjabi films she acted in include Kade Dhupp Kade Chhaon, Geet Baharaan De and Aye Dharti Punjab Di (1963).

Jabeen quit the film industry in 1968 after wrapping up her career with the film Sweetheart (1970) starring Shashi Kapoor and Asha Parekh. Marrying Ashok Kak, President of the Kodak Company, in 1968, she moved away from films and became involved in social work.

Her son, Divvij Kak also debuted as an actor, featuring in the films Saathi: The Companion (2005), and Pehli Nazar Ka Pyaar (2008).