The story of HUM AAPKE DIL MEIN REHTE HAIN opens with Vijay Chopra (Anil Kapoor) returning from the USA, to join his family business. The only son of the widower industrialist, Viswanath Chopra (Anupam Kher), Vijay carries home with him the attitudes of the Western world, some good like equality of man and woman in a relationship and some bad, like failure to recognise marriage as an institution.

Viswanath Chopra hopes to bring some stability into his son's life through marriage and Vijay is all the more reluctant to the knot. A compromise is finally struck between the father and the won with Vijay agreeing to marry, with a condition. The condition that if he is not compatible with his wife after a year of marriage, he will leave her.

Although furious with the condition, Viswanth Chopra realises that a marriage with a condition nevertheless better than no marriage at all. But which girl in her right senses would marry a person who wants to sign a contract stipulating the one-year compatibility contract? Viswanath Chopra feels that there is no one better suited than Megha (Kajol), his trusted and efficient secretary, who is capable of changing his son's heart within an year of the marriage

Megha (Kajol) is the sole breadwinner of a middle class family. Even though she finds the 'one year contract' disgusting, the lure of settling her family plays an important role in deciding to marry Vijay. In the one year of marriage, Megha realises that Vijay is not a bad husband at all. He treats her as an equal partner in marriage and gives her the respect and privacy of an individual. The year just flies by and an extremely happy Megha and her father-in-law Viswanath Chopra believe that Vijay has finally turned around to believe in the institution of marriage.

Sadly, Vijay thinks otherwise and on their first anniversary, he enforces the contract. His explanation is that he and Megha are more friends than wife and husband. Megha leaves his house and goes back to her mother's house. She finds a job in another firm and starts working again. Once the society realises that Megha's marriage was a one year contract, they make fun of her and brand her characterless. When Vijay comes to realise what is happening in Megha's life, he wishes to take her back as his wife. However, Megha refuses point blank to come back to a man who does not know the value of marriage.

Vijay tries every possible trick in the trade to woo his ladylove. He buys out the company she works for, he organises a music show with her favourite artistes, he wears her favourite colours, etc. In the midst of all this, Megha realises that she is pregnant with Vijay's child. Vijay is elated and so is his father. But Megha still refuses to go back to Viajy. She is willing to acknowledge Vijay as the father of the child, but not as her husband any more.

Whether Vijay succeeds in winning Megha's heart will be revealed only on the silver screen in Hum Aapke Dil Mein Rehte Hain. 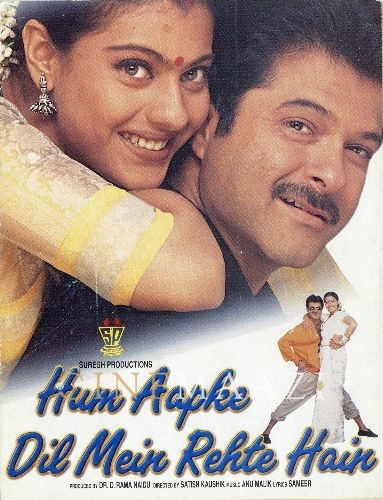