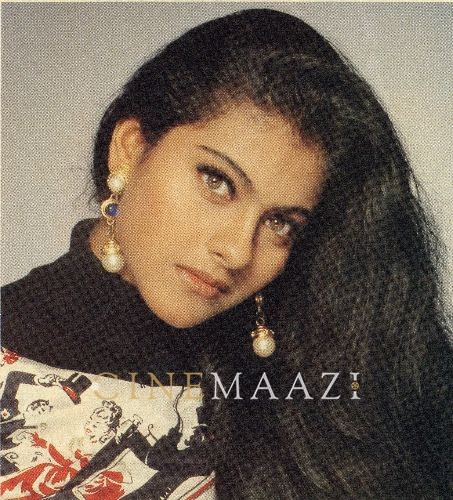 Lauded as a ‘consummate heroine with excellent emoting and sensational screen presence in each portrayal,’ Kajol is one of Hindi cinema’s most successful and admired actresses. Winner of six Filmfare awards for Best Actress for her performances, she has been hailed for her unconventional beauty, for going against the trending norms, and setting her own rules in the 90s, a time when individuality was largely absent where heroines were concerned. Known onscreen for being the firebrand, or the emotional and sensitive type, or then just pure mischief, she has redefined cliches in multiple ways. Her natural manner of acting, her ‘felicity for expression’, her distinctive approach to choosing projects, her impatience with make-up and the other trimmings of stardom, her insistence on not simply acting out her scenes and delivering her lines but inhabiting her characters, and her irrepressible joie de vivre, have marked her out as a unique performer. Filmmaker Karan Johar is not far from the truth when he reveals that when he would call ‘Action’ on a shoot, he would stand by and expect a little atom bomb explosion from Kajol “because that is who she was”. Honoured with the Padma Shri by the Government of India, she is one of the few actresses who continued to have a successful career post marriage and motherhood.

Born 5 August, 1974 in Bombay to actress mother Tanuja and filmmaker father Shomu Mukherjee, she schooled at St. Joseph’s Convent, Panchgani, where she developed an interest in dancing, and reading fiction. After an unsuccessful attempt by her mother Tanuja to launch her as an actress, Kajol was signed by Rahul Rawail for the romantic drama Bekhudi (1992) opposite Kamal Sadanah, when she happened to visit photographer Gautam Rajadhyaksha’s studio. The film failed at the box office but its leading lady garnered attention. She went on to be signed for Abbas-Mustan's Baazigar (1993). This crime thriller, co-starring Shah Rukh Khan and Shilpa Shetty, was a thumping hit, weighing in as the fourth highest-grossing film of the year. Her performance as Priya Chopra, a young woman who is unaware of the identity of her sister's murderer and falls in love with him, came in for applause.

Following the emotionally draining Udhaar Ki Zindagi (1994), it was her performance as the ambitious daughter of a chauffeur who transforms herself into a top model in her next, Yash Raj Films' Yeh Dillagi (1994), which garnered praise, bagging her, her first Filmfare Best Actress nomination. Featuring in light-hearted films such as Hulchul (1995), and Gundaraj (1995), she was part of the thumping hit Karan Arjun (1995), directed by Rakesh Roshan. The second-highest grosser of the year, the biggest and best was yet to come: namely, Dilwale Dulhania Le Jayenge (1995), her fifth and final release of the year. The Aditya Chopra directorial turned out to be the biggest commercial success of the year, as well as one of the most successful films of all time in India. Kajol, playing Simran Singh, a young NRI raised in a conservative family, was praised for her realistic performance, “bringing warmth and credulity to the initially prudish and reluctant Simran.” Her onscreen chemistry with Shah Rukh Khan also became a huge draw, establishing the duo as one of the best-liked screen pairs of Hindi cinema. DDLJ, which went on to break the record as the longest-running Indian film of all time, bagged Kajol her first Filmfare Best Actress Award. If 1996 was a slow year for the actress, with Vikram Bhatt's Bambai Ka Babu, the following year saw her play Isha Diwan, a psychopathic serial killer and obsessive lover, in Gupt: The Hidden Truth (1997). The role, which tapped her versatile artistry, was a watershed moment in her career, seeing her going strongly against typecasting to perform what was possibly the toughest role of her career. She became the first actress to be nominated for and win the Filmfare Award for Best Performance in a Negative Role.

Featuring in the reincarnation-themed film Hameshaa (1997), she starred in the romantic musical Sapnay (1997), for which she was complimented for her perky performance as a convent student who aspires to be a nun. Indra Kumar's comedy-drama Ishq (1997) was next, co-starring Aamir Khan, Juhi Chawla and Ajay Devgan, and which was a commercial as well as critical success. Her standing as a top leading actress was underlined the following year, when she featured in the three highest-grossing films of the year, namely Pyaar Kiya To Darna Kya (1998), the hit Pyaar To Hona Hi Tha in which she was called the film’s saving grace (1998) and Kuch Kuch Hota Hai (1998), her biggest success of the year directed by debutant director, Karan Johar. She was hailed for her iconic performance in the latter as the tomboyish college student who is secretly in love with her college buddy and who later transforms in appearance. Dubbed ‘almost mesmeric’, she won her second Filmfare Best Actress award and first Zee Cine Award for Best Actor – Female for her performance. Despite the psychological thriller, Dushman (1998), tanking at the box office, she won praise for her double role, playing twin sisters Sonia and Naina in a revenge drama. Each film saw her emerge as a consummate heroine with her emoting and screen presence emphasised in each portrayal.

She went on to essay a role with shades of grey in the Prakash Jha-directed Dil Kya Kare (1999), her first film post marriage to husband Ajay Devgn. Interestingly, she played the other woman, refusing the wife’s role which didn’t offer her much in terms of performance. Her next Hum Aapke Dil Mein Rehte Hain (1999), which saw her essay the sacrificing woman opposite Anil Kapoor, succeeded at the box office, while her final release of the year, the lacklustre Hote Hote Pyar Ho Gaya (1999), was appreciated for her chemistry with Jackie Shroff.

Tepid releases like Raju Chacha (2000), and Kuch Khatti Kuch Meethi (2001) were followed by the top-grossing Indian production of all-time in the overseas market for five years – Kabhi Khushi Kabhie Gham (2001). Her performance in the Karan Johar-directed family drama as the loud, fun-loving Punjabi woman from Chandni Chowk won her, her third Filmfare Award in the Best Actress category. Her Punjabi dialect came in for praise, as did her comic timing and emotive expressions in a film packed with big names including Amitabh Bachchan, Jaya Bachchan, Shah Rukh Khan, Hrithik Roshan and Kareena Kapoor.

Taking a sabbatical from acting to focus on starting a family, she returned to the sets with the romantic thriller Fanaa (2006) playing a blind Kashmiri girl who unknowingly falls in love with a terrorist essayed by Aamir Khan. The film, a financial success, won her, her fourth Filmfare Award and second Zee Cine Award in the Best Actress category. She received good reviews for her performance in her husband Ajay Devgan’s directorial debut, U Me Aur Hum (2008), playing a woman suffering from Alzheimer's, ‘raising the bar strikingly high’.  More praise followed for her next, My Name Is Khan (2010), for her performance as Mandira, a Hindu single mother in the USA who marries a Muslim man with Asperger syndrome. Her highly appealing, emotion-charged performance won her, her fifth Filmfare Best Actress award, which brought her on par with the record held by her late actress aunt, Nutan. We Are Family (2010) brought forth another ‘stunning’ emotional performance as the single mother with cancer. On the heels of Toonpur Ka Super Hero (2010), a second hiatus followed for the actress, post which she returned five years later, teaming up with Shah Rukh Khan for the seventh time in Dilwale (2015). While the film elicited a mixed response, her ‘radiant presence’ onscreen was appreciated. She teamed up with Dhanush in the Tamil-Telugu film Velaiilla Pattadhari 2 (2017), playing the chairwoman of a construction company, with loads of attitude. Helicopter Eela (2018) saw her essay an uneducated aspiring singer who enrolls at her son's school to complete her education. The year 2020 saw Kajol play Savitribai Malusare, the wife of Tanhaji in the biopic Tanhaji: The Unsung Warrior (2020) essayed by Ajay Devgan. Despite limited screen time, she came in for praise for her strong character, and was deemed ‘a delight to watch’. She also featured in her first short film, Devi, playing a middle-aged woman Jyoti who is one of 9 women stuck in a room. The Renuka Shahane directorial Tribhanga (2021) sees her make her Netflix debut in a film revolving around three women from different generations.

Kajol dubbed for the Hindi versions of S. S. Rajamouli's Telugu-language fantasy film Eega (2012) and the computer-animated superhero film Incredibles 2 (2018). Making her entry onto the small screen, she featured as a talent judge with husband Ajay Devgn and mother Tanuja in Zee TV's 2008 reality show Rock-N-Roll Family. She also plays a supervisory role in Ajay Devgn's production company, Devgan Films (renamed as Devgn Entertainment and Software Ltd.). A part-time member of Prasar Bharati in 2016, she has also been involved in various philanthropic endeavours related to women and children, such as the NGO Shiksha, the Cancer Patients Aid Association, and The Loomba Trust  devoted to supporting widows and their children. Brand ambassador of Pratham, a charity organisation for children, she also made a documentary about protection of the girl child as part of the Government of Maharashtra's campaign Save the Girl Child.

Featuring on popular lists such as Rediff.com’s Best Bollywood Actresses Ever, Best Dressed Woman, and NDTV’s Most Popular Actress of All Time, she was also included thrice on Forbes India's Celebrity 100, based on the income and popularity of India's celebrities.