The story of "JAI SHANKAR" is not the story of Shiva & Parvati. Nor it has anything worthwhile pertaining to the life and achievements of this revered couple. It deals with altogether a different man, a different personality-a personality strong and mighty, but unfortunately misunderstood and misrepresented for the simple reason that he remained loyal to himself and to his principles unto his last.
Truly speaking, "JAI SHANKAR" is the story of Ravana, King of Lanka, the mightiest man of our Mythology, mostly misrepresented and misunderstood, but the greatest Devotee of Shiva. A Brahmin by birth, himself a great devotee of Shiva, well-read, and well-acquainted with the customs, conventions and traditions of his time; how this mightiest man of our Mythology, has been deried declaimed and disfigured all throughout is really a pity, an anomaly which reasoning fails to account for. This is the basic theme of this story.
Ravana was the son of Vishrwa by his Sudra wife Keksi. Vishrwa's real wife was the daughter of Bhardwaj, who had given birth to Kuber, Kuber was always at loggerheads with Ravana, and during the childhood both the brothers, imbibed a strong hatred for each other especially Kuber, who was purely of an Aryan Stock, always used to jeer taunt, rebuke and scold young Ravana, in and out of the premises of the house, the class room and the temple with the result that Vishrwa one day flew into a temper with the result that Ravana & his mother were driven out of the house. Poor Keksi had no other go but to seek the protection of her father, and old Sumali gave her not only mere food and shelter but love, respect, care and comfort, which she required most.
But for the young sentimental Ravana, the days were as dreary as before. Life had not undergone and change. The atmosphere was as vicious as it was at his father's house. The Anaryas were looked down by the Aryas and there was no place for them in the society. This class distinction, so peculiarly absurd and degrading made indelible impressions on his heart and his nature revolted, but he did not let his blood boil in his veins. But how long could this continue? A day was to come when Ravana's patience would be called for a final test. It did not take much time to come. Ravana was still in his teens. Sumali's house was set on fire. Poor fellow died in the flames. Ravana was touched to the quick. His patience was almost exhausted and he took a solemn vow to avenge the death of his grand father, who was so mercilessly victimised by the so called enlightened Aryans. With tears in his eyes Ravana left the place for good and shifted into the jungles.
Kuber, in the meanwhile, had under the able guidance of his talented father marked out a career for himself as Governor of Lanka (Landadhipati). The wind of fortune was blowing favourably and he was rising step by step. Ravana, on the other side, was simply whiling away his tie in reckless wandering like a nomad barbarian, sometimes following a deer, sometimes a rabbit, totally forgetful of the past, of what he was and what he had become. The problem of daily bread had engrossed him so much that he hardly had time to recollect the past, and compare it with the present and to find out ways and means to mould his future to enable him to realise his life's ambition.
Here, he comes in contact with the beautiful Mandodari, the only daughter of Maya, whom the father wanted to marry Kuber. The two brothers come face to face with Mandodari standing in a corner, looking anxiously at Ravana, as if entreating for his help. But the old father did not budge an inch.  A Princess would be married only to a Prince and not a beggar. For the first time Ravana felt the shock. He looked at Kubar. There was jealousy darting from his eyeholes. He looked at Maya. The features were stern and unyielding. He looked at Mandodari. There was a flutter in her heart, as i she was telling him how she wished he would have been the Lankadhipati. Ravan could not bear this insult. He makes a firm determination and declares that he would be the Lankadhipati and quickly walks out.
It would be a long story to relate at length the tribulations of Mandodari and the efforts of Ravana to realise his object. But by the grace of Shiva he gets his desideratum and the beautiful Mandodari too. You would perhaps say that the story has come to an end.
But no, still there is much more to be seen. WE would not like to drag you through this dry narrative but would advise you to follow the trend through the silver screen. 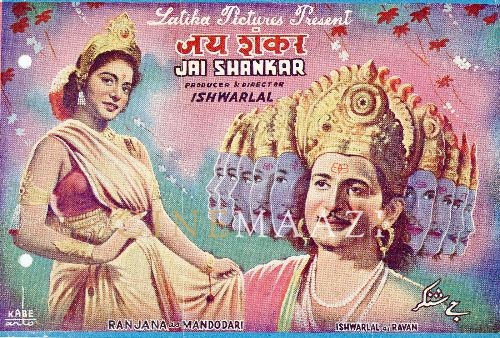