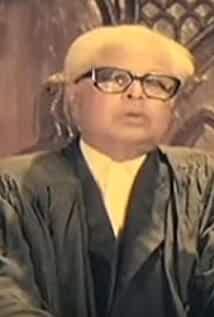 Brahm Bhardwaj is a supporting actor with more than 200 films to his credit, in the course of a career spanning approximately 40 years. He left his mark with his charismatic personality, skill in dialogue delivery, and acting skills. His clear and effective voice and good pronunciation also won attention. While his talent remained largely unused by most filmmakers, directors Hrishikesh Mukherjee and Asit Sen gave him more important roles. He is known for films such as Anand (1971), Spy in Rome (1968) and Yakeen (1969). He was often seen essaying a judge or lawyer on screen, as well as a principal, doctor and police officer.

In many of the films that he featured in, he acted with several leading actors of the time, such as Dharmendra, Shammi Kapoor, Rajesh Khanna, and Amitabh Bachchan.

He is best remembered for his roles in films directed by Hrishikesh Mukherjee, such as Anari (1959), Anupama (1966) and Anand (1971). Though his roles were small, the excellence of his acting ability is evident. He was able to bring to life even a short role of a few minutes’ duration in the scene in Anand (1971). He appeared in the role of a saint, who has taken a vow of silence, and does not speak. The cancer-stricken Anand (Rajesh Khanna) is taken by his sister (Seema Deo) to her guru (Brahm Bhardwaj), to be blessed with a long life. He excelled in the scene in which he blesses Anand, with only his eyes mirroring emotions.

He had a daughter named Kavita Bhardwaj, who got married and settled in England.