The man made law may not give justice to the sufferer. But the nature does give it. Nobody can exchange it sways and law.

Like many villages of India, here was a village Nyaypur, but contrary to its name there was only injustice. The Sarpaunch (Headman) (Om Shivpuri) of the village was virtually the ruler - Nobody could raise his voice or head infront of him.

A young doctor Vijay Varma (Jackie Shroff) along with his wife Aarti Varma (Radhika) and child come to that village to treat the poor and helpless people, but very soon he realised that health cannot be restored to people till they get food and wipe out fear. He decided to raise his voice against cruelty and injustice.

Surpanch got scared as doctor was a big danger to his Empire. He never wanted to leave his throne as he had tasted the blood of poor people's income and did not want any interference of doctor. The clever Surpanch played his game and involved doctor in a murder case and sent him to jail. Thereafter he called village Panchayat and turned out doctor's wife and her daughter from the village and handed her to city police Inspector Pandey (Kiran Kumar).

She alongwith her child came to city. The police Inspector gave her shelter, but the dark shadow of misery never left her - one day in an effort to snatch the chastity of helpless girl he killed her small daughter.

With the dead body of her child she went to a social leader for help and justice but instead of justice or help she lost whatever was left with her.

She decided to end her life as there was nothing for her to life for - right at the moment when she was going to commit suicide Bharti Devi (Hema Malini) a famous lawyer saved her and promised to get her justice, but the experienced crooks played their triumph card and the helpless woman was sent to jail. Bharti Devi took this as challenge and then started the battle. The circumstances were in Advocate Bharti Devi's favour and it looked she will win the case of justice, but a fatal blow came and Bharti Devi was killed and the darkness again prevailed.

It is the law of nature that when injustice - cruelty prevails all over. The ray of hopes rise to shatter the darkness.

Even the cruelest and strongest man cannot change the universe and bows before the laws of Nature.

But when will the Nature come into action?

When the sufferer will get justice?

Who will be the source?

Only knows the answer - Mother Nature. 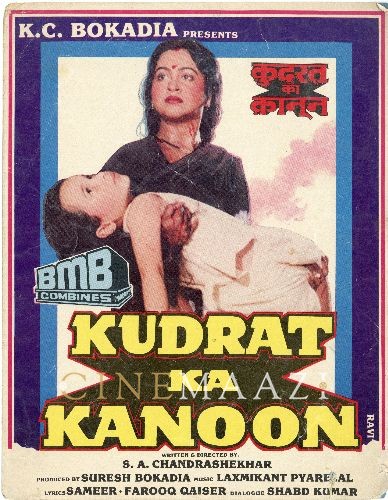