Parental influence over children and to what extent, are parents responsible in shaping up the behaviour of the child, in relation to its environment, is the subject of the film "Ladke Baapse Badke". Our two "Ladkes" Ajay and Vijay are sons of two giant rival industrialists - Verma and Sharma respectively. It is said of them, that their rivalry is traditional, the cause of which has been lost in tradition. Ajay Verma and Vijay Sharma were brought up in such an environment, and they were deemed to be enemies of each other in the best of their family tradition. Ajay and Vijay attended the same school in the city. It was a wonder to observe, that the boys who opposed each other in every fields, should share the same feeling of friendship in regard to Mohan - a poor crippled boy, who dwelt with his widowed mother. Mohan does his best to teach them the superiority of love and brotherhood, but to no avail.

One fine ay, the principal ordered the "Ladkes" to play the title roles of "Sikander and Porus". The boys did protest, but the decision was firm. But alas fate put a spoke in the wheel - Rajan a spiteful boy, put some itching powder in the costumes of "Sikander and Porus". The play ended in a total chaos. The principal was furious. Meanwhile, Mohan had identified Rajan as the culprit. He was instantly dismissed.

But the repercussions was not yet over. The pride and ego of the "Ladkes" were hurt. A fight to death takes place, Mohan pleads with them but to no consequence. They fought as creatures possessed by demons. Mohan in a desperate attempt to stop them, was instantly struck on head. He dropped unconscious. The boys on seeing this were exorcised of their frenziness. Mohan was in coma, he had little chance to survive. Both the boys were ashamed of their act. A prayer said with sincerity is always answered by God. Mohan gains consciousness, the boys cry with happiness.

As the days fleeted by, the friendship of the "Ladkes" grew strong in bond and character - but an invisible dagger hung over the boys head - what sort of calamity would befall, once the fathers discover about the boys friendship - then one day it did happen. It was the day of "Boxing Final". The "Ladkes" were engaged in a very grueling Boxing Match.

The final bell was rung - The enthusiastic crowd, along with the tow fathers, awaited with eagerness the decision of the judge - The decision was draw - The stadium roared with happiness, the "Ladkes" thumped each other - but alas in their happiness, they had forgotten their fathers in the stadium. Their pride had suffered a great setback. On that fateful day, a dark shadow crept into the lives of the boys. Vijay Sharma was being sent to a boarding school. Ajay Verma was confined to his room - evil forces were gnawing the bonds of friendship. The parting or the two friends is heart-touching and extremely sorrowful.

The boys decide to run away in support of their "friendship" and therefore, challenge the "wrong ideologies of their fathers". A very gripping and a thrilling drama unfold on the screen. The two runaways, play a deadly game of hide and seek with the police. They are captured by dacoits in the jungle. They escape from dacoits den with the help of chief dacoits' sister. The boys roam about in the jungle. Animals humour them with their antics, when unexpectedly their happiness was shattered. A scorpion had bitten Ajay. He was going to die. Ultimately thanks to God's miracle, and Vijay's brave feats, to get the medicinal - plant Ajay regained life.

A very high emotional battle, is subsequently taking place in the sub-consciousness of the "fathers". A battle between right and wrong of attitude of friendship.

In the jungle, the "runaways" now witness the macabreness of the jungle. A tense encounter takes place with a man-eating tiger to be finally captured once again by the dacoits. Their capture, results in the killing of the chief dacoit by dacoits second-in-chief a debauch character - sinister and cruel in thought word and deed. He vows to kill the boys once he gets hold of the ransom. The finale, of the film will keep you on the seat's edge. A finale that is unique in its emotion and spellbinding in its action. 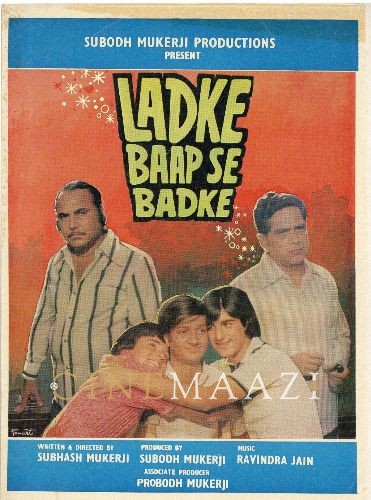