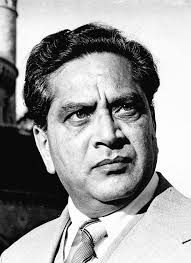 Born in Satara district, Maharashtra, to Balakrishna Chintaman Lagoo and Satyabhama Lagoo, he was the eldest of four children. During his early years itself, he discovered a deep love for theatre, and was inspired by the classical Marathi monologues of actors such as Nanasaheb Phatak, Keshavrao Daate and Mama Pendse, as well as Hollywood’s Paul Muni, Spencer Tracey and Ingrid Bergman. Attending Bhave High School, Fergusson College (University of Pune), and B. J. Medical College (University of Pune), India, he received his medical degrees - MBBS and MS. He simultaneously also acted in five full-length plays and 15 one-act plays in a five-year span. Alongside his passion for the stage, Lagoo continued his medical education. He went on to acquire a specialization in ear-nose-throat surgery and moved to Africa. His theatre activity through Progressive Dramatic Association in Pune and Rangaayan in Bombay continued when he was in India. Finally, in 1969, he quit medicine at the age of 42 and returned to India, to pursue a career in theatre. Post a few months of struggle, he bagged the role of Sambhaji, son of Maratha king Shivaji, in Vasant Kanetkar’s Marathi play Ithe Oshalala Mrityu. His obvious talent garnered attention, even though his initial plays were not commercial successes. His leading role in the 1970’s play Natsamrat written by Kusumagraj (Vishnu Vaman Shirwadkar), saw him play Ganpatrao Belwalkar, a thespian who retires from the stage after portraying Shakespearean characters but is unable to escape the drama of family clashes. Lagoo threw himself completely into the intensely demanding role, and the play remains among his most iconic. Felicitated with the Sahitya Akademi Award, Natsamrat ran successfully for more than four decades and was remade in 2016 as a film starring Nana Patekar.

Dr Lagoo acted in and directed Vijay Tendulkar’s play Gidhade, an incisive social critique, while his performance in plays such as Kachecha Chandra and Himalayachi Saawli caught the attention of V Shantaram. Dr Lagoo featured in the latter’s Pinjra (1973), his first film, which saw him play a principled village teacher. Proving his ability to mould his talent according to the medium, he went on to play a protagonist in Saamna (1974), the debut film of famous filmmaker Jabbar Patel, as well as Patel’s political drama Sinhasan (1979).

The Jaya Bachchan film Aahat that Dr Lagoo was poised to make his Hindi cinema debut with did not release as planned. His first Hindi film turned out to be Suresh Kumar Sharma’s Mere Saath Chal (1974). Multiple Hindi and Marathi films followed such as Hera Pheri (1976), Muqaddar Ka Sikandar (1978), Chandra Hota Sakshila (1978) and Laawaris (1981); however, it was his character in Bhim Sain’s Gharaonda (1977) that gave his talent the depth and subtlety it deserved. While his performance as the sharp and savvy businessman in the film won him a Filmfare award for Best Supporting Actor, he also won praise for his depiction of Gopal Krishna Gokhale in Richard Attenborough’s Gandhi (1982).

His only directorial venture was the Marathi film Jhaakol (1980) which featured Tanuja and Urmila Matondkar as a child artiste.

Dr Lagoo remained committed to theatre, believing in its potential to engender social change. He also spoke up against religious and spiritual myths, rejecting the idea of God, and also working with the anti-superstition movement in Maharashtra.

In spite of suffering a heart attack early in life, he was dedicated to staying fit and thus remained active in acting till his mid-80s. This is proved by his performance in the Marathi political drama Nagrik (2014).