The eternal theme of MAGROOR is the conflict of emotions between those who would not hesitate to ruin their personal happiness for the sake of maintaining their false pride.

One day Chandni accidentally meets Manohar a modern Kisan. A battle of wits ensues between them both. However, the younger couple seem to be attracted towards each other-Manohar, with his modern ideas of about agriculture and the proud owner of the tractor and Chandni born with a silver spoon in her mouth and believing in marrying for love only.

Nothing would please Chachi more than seeing Moti and Chandni married. But when Moti realses that Chandni does not love him, he lies to Chachi that he is already married to one Minoo Roy. Now it is so happens that a girl by that name really exists and unknown to Moti has been recently has fallen head over ears in love with Minoo. When Chachi locks up Moti and Minoo in her room believing them to be man and wife, Minoo has no recourse but to hit Moti with a vase and effect her escape via a balcony.

At first Chachi is shocked to learn that Chandni wants to marry a Kisan. But ultimately she gives her consent as she has come to like the independent-minded boy. Now an unexpected hitch occurs between the lovers. Chandni wants Manohar to stay with her at her palatial residence and Manohar insists that she should stay with him in the village.

The lovers, sticking to their false pride, part.

When Moti comes to his Poona office, Minoo pushes him out not knowing that he is her boss. Moti asks Manohar to pose for the time being as his boss. A very humorous situation develops when Manohar acting as the boss increases the salaries of the staff indiscriminately and purchase charity show tickets giving a fat donation.

After the show, Chachi drags Moti away to meet Chandni who is pining for Manohar. When Minoo and Manohar go to Moti's place, they are surprised to see Moti carrying Chandni away in his arms. Actually he was preventing Chandni from running away. But they misunderstand the situation.

Manohar prevails upon Minoo to come to the village and help him in his work. Moti comes to see Manohar and sees Minoo in the distance. manohar out of jealousy lies to him that he is going to marry Minoo. Moti swears to kill Manohar. When Minoo acquaints Manohar's mother with the truth, she decides to see Chachi.

The humiliated Chandni comes to Manohar ad asks him to forgive her. But the arrogant boy insults and leaves her. Chachi comes to know from mother that Chandni and Manohar still love each other. Both the elderly ladies rush to the fields in the funny motor car of Bholaram.

In the fields, Moti and Manohar are fighting a deadly battle. Chandni rushes up. She is accidentally wounded by Moti who was going to kill Manohar with an iron rod. This brings the excited young men to their senses. Now Chachi, Mother and Bholaram come up. Chachi dominates the scene. Moti and Minoo and Chandni and Manohar are all reconciled. And thus all's well that ends well. 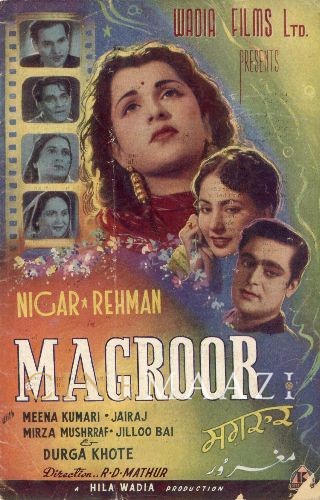