Woman! Thy name is sacrifice. You are the embodiment of selflessness. But this is your ill-luck that today's man-oriented society has taken your dedication and sacrifice as your helplessness and you are always exploited and sexually assaulted by man.

"Majboor Ladki" is story of such a helpless girl named Manju, who belonged to middle class small family consisting of three members only, besides Manju one severely ailing brother Shailesh and mother Janaki. Manju was the only earning member in the family.

Her brother Shailesh was diagnosed as Cancer patient. She required an amount of Rs. 30,000/- for operation of Shailesh just to save him.

She was working in an Office owned by Seth Govind Ram, who had white business in the day and No. 2 business of smuggling etc. in the night. Manju approached her Boss for the financial help for her brother's operation. Seth Govind Ram told her that there was only one biggest principle of the world of "Give and take". Manju was helpless to accept the said principle and agreed to come to his bungalow in the night, but after the start of the operation.

On one side operation of Shailesh was going on and on the other side the sexual operation of Manju went on. Suddenly when the sex was at the climax, Seth Govind Ram was shot dead by some unknown person. Manju got perplexed and moved away quickly from the murder spot to reach hospital immediately where the operation of Shailesh was going on. When Manju was running on the road side, she was kidnapped by gangsters of most notorious Don Pratap Seth of the City.

Manju was engaged to most honest Police Inspector Vivek, who pledged to make the law sit in the chair of truth, from where law should be able to give the justice to everybody, but Don told the Inspector - of which law you are talking which is encaged like a bird in my cage, whenever I wish I can make it free or enslave it.

After having lost everything in life Manju resolved that she may be helpless for herself but not for the country. She won't hesitate to give her life to save the country from the traitors.

...Inspector Vivek could get his love Manju back or not?

...What happened to Pratap Seth? Whether he was arrested or not?

...What happened to the sacrifice of Manju?

To get the answer of these questions, you must see 'MAJBOOR LADKI' on silver screen at the cinema houses in your cities. 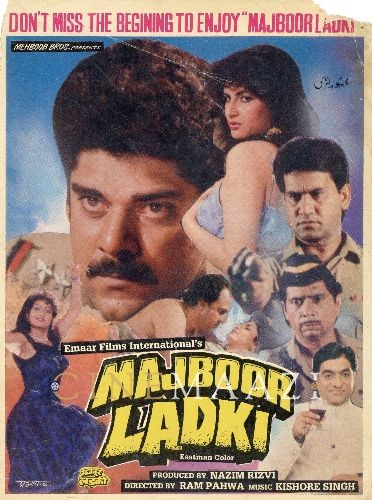