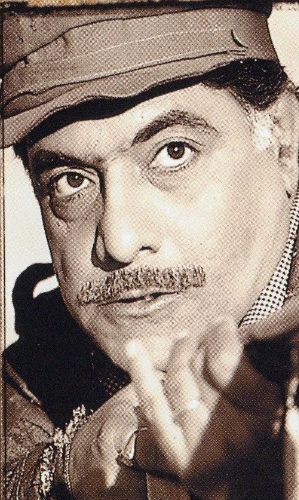 Seen as the quintessential common man onscreen, largely owing to his character in the widely popular teleserial Wagle Ki Duniya, which was based on the work of noted cartoonist R K Laxman, Anjan Srivastav has several noteworthy performances to his credit, in television, films and theatre. He is known for his comic and other supporting roles including that of the morally strong father in several films including Mr India (1987), Salaam Bombay (1988), Aakhri Adaalat (1988), Jo Jeeta Wohi Sikandar (1992), Yeh Kaisi Mohabbat (2002) and Sanju (2018). He has a strong body of work in television, with popular serials such as Yeh Jo Hai Zindagi (1984), Wagle Ki Duniya (1988), Bharat Ek Khoj (1988), and Tehreer…Munsi Premchand Ki (2004) to his credit. A film, television and theatre actor, he has acted in more than 200 films in the course of his career; his more recent work includes Chandigarh Kare Aashiqui (2021), PM Narendra Modi (2019) in which he essayed the role of Atal Bihari Vajpayee, Junction Varanasi (2019), and Jab Harry Met Sejal (2017). A veteran stage actor, he has been associated with Indian People's Theatre Association (IPTA) in Mumbai, also serving as Vice-President for several years. Interestingly, all through his acting career, he simultaneously remained committed to his job at a public sector bank, from which he retired in 2001 after 31 years of service.

Born on 2 June, 1948 in Calcutta, into a family hailing from Uttar Pradesh, he had the innate desire to act from an early age. However, his strict father, an employee with Allahabad Bank, was not accepting of his pursuit of acting. This led to him completing his B.Com. and even acquiring an LL.B. degree from Calcutta University. During this phase, he started to participate in Hindi and Bengali theatre in 1968, also acting in plays for All India Radio.

Joining Allahabad Bank, as per his father’s wishes, he continued to dabble in theatre on the side, acting with well-known theatre groups such as Kala Bhavan, Sangeet Kala Mandir and Adakar. He also bagged small roles in films, such as the Ajit Lahiri directed Chamelee Memsaab (1979), which featured Carol Evans Alter, Tom Alter, and Mithun Chakraborty.

The tragic demise of his sister in 1976 proved to be a turning point in his life. It was at this point that his father eventually relented, allowing him to get transferred to Mumbai, so he could also more actively pursue his passion for acting in films and television. Thus, aged 30, and a public sector bank employee to boot, did his tryst with acting begin, which was to lead to a long and successful career in the realm of films and television, as well as theatre.

Moving to Mumbai, he joined the Indian People's Theatre Association (IPTA). He worked in several IPTA productions, contributing to plays such as M. S. Sathyu’s well-known Sufaid Kundali and other socially relevant plays. He enjoyed a long innings with IPTA, and also served as its General Secretary, as well as Vice-President. He also worked with the city’s Prithvi Theatre.

From theatre to films, was but a step away and he went on to feature in films such as Hrishikesh Mukherjee's comedy classic, Gol Maal (1979), Saza-E-Maut (1981) produced and directed by Vidhu Vinod Chopra, and JP Dutta's Ghulami (1985).

His tryst with television proved to be even more successful starting with the popular sitcom Yeh Jo Hai Zindagi, followed by serials such as Manoranjan, Govind Nihalani’s wrenching Tamas, the heart-warming Nukkad directed by Kundan Shah and Saeed Akhtar Mirza, and Katha Sagar, which featured a collection of stories by writers from around the world. In 1987, he appeared in the title role of the comedy series Wagle Ki Duniya, which firmly lodged him in the limelight. Based on famed cartoonist R.K. Laxman's Common Man, it revolved around issues of the common middle-class Indian man, in which he featured as a bumbling sales clerk in a multinational, with Bharati Achrekar playing his wife. He also acted in Bharat Ek Khoj, the epic series directed by Shyam Benegal based on Pandit Jawaharlal Nehru’s book Discovery of India.

On the big screen, he continued to feature in a variety of supporting roles in several films. If he played Mr Tripathi, the head of India's hockey association, in Chak De! India (2007), he played the Chief Minister in Mahaadev (1989), Jammubhai in Mira Nair’s Mississippi Masala (1991), the race commentator in Jo Jeeta Wohi Sikandar (1992), Police Inspector I M Tripathi in Chamatkar (1992), an inmate in Dilwale (1994), the grandfather Dinanath Chaudhary in Khoobsurat (1999), a Member of Parliament in Censor (2001), a jailor in Ek Rani Aisi Bhi Thi (2013), and a minister in Sanju (2018).

In the realm of theatre, over more than 40 years he has acted in excess of 30 plays, many of which became jubilee hits. These include Bakri, Moteram Ka Satyagrah, Shatranj Ke Mohre, Ek Aur Dronacharya and Chakkar Pe Chakkar.