There was a miser (we mean "Makkheechoos") named Manik. He had a son-Narayan. Both loved each other very much. Manik used to go to temple regularly. He was so orthodox minded that he never used to take even water outside his home. He was not used to theft nor lies. However, he had one weakness-Money!

He had an underground room called 'Bhandara' in which he with his own hands used to break open the wall and hide gold, silver and cash. He was miser in the true sense of this word. For three years he would not change his shoes and for six months together he wouldn't think of washing his underwears!

And one day, having differences of opinion on money and living, Narayan, the son, escaped from his house. He decided forever that unless he wipes out the bad name of "Makkheechoos" from his father's name, he would not come back.

Then he started a dramatic company for destitute and helpless young people, in which Laxmi an educated lady, wrote dramas and worked as the heroine of the show. She loved Narayan very much and Narayan too... When both came to know each other thoroughly they took an oath that unless they wipe off the blot of "Makkheechoos" from the fair name of Manik, both would not think anything else in life.

Then, with dramatic turns Mama Matroo, nephew Narayan and heroine Laxmi together played such tricks that even a single pie did not remain in Makkhee Mahal of "Makkheechoos". Manik was very cleverly forced to give away all his money with shaking hands, weeping eyes and laughing face.

In a very short time Manik Makkheechoos became 'Danveer'-a great donor, and he earned such a name that in five hundred years of history, no miser had earned.
But, one day, all of a sudden, he came to know that this was all planned deceit. He immediately lost his mind and became mad.

Now the question remained... Should he be brought to senses or not? And most important of them all was-Whether he could come to his senses? All relations started thinking.
Our only comment on this question is-

If you are a "Makkheechoos", you should see this picture for the answer.

If you are not, you cannot help seeing this...

Because, without seeing this, you would not be able to answer correctly. 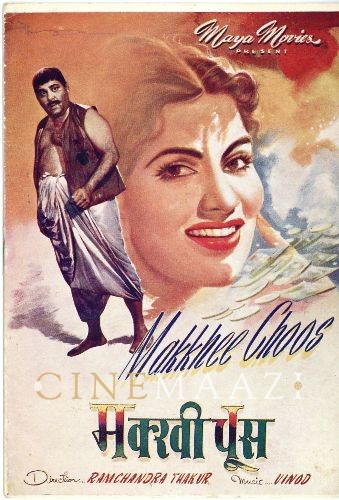