A crash !... A boy runs and gets into a room of a dilapidated house. Ramesh, a village schoolmaster is seen there reading. The boy informs Ramesh that his sister is seriously injured by a fall. Ramesh must attend to her at once.

Ramesh finds his sister bleeding profusely, She is removed to a hospital.

She needs a blood transfusion. Ramesh is prepared, but his blood is found unsuitable for the purpose.

Blood can be bought but Ramesh has no means to buy it.

A physician offers his blood. Ramesh's sister is saved. Ramesh thanks the physician.

Ramesh lives mainly for his sister. He has nobody else to call his own but Shankar, his friend. Shankar feels for Ramesh, who had big ambitions in life but all ended in his being a mere schoolmaster.

Ramesh is teaching in his classroom. He finds one of the boys inattentive. Ramoo, the boy is being called from outside by somebody, Ramesh goes out and finds the caller nobody but Krishna, the local Zamindar's young daughter. Ramesh sees her, likes her, and wishes that she comes again and then again to call Ramoo. Ramesh and Krishna meet again. Each likes the other. Is it love?

Ramesh becomes Krishna's tutor. The Zamindar, though irritated decides to marry her to Ramesh — on condition that Ramesh would live with him,
But Ramesh refuses this humiliating offer.

Ramesh goes to Calcutta. Shankar advises hin to join the Metropolitan Opera Co. and get rich quick. Ramesh refuses to sell his singing talents but after Shankar's repeated requests, he decides to see the manager of the Opera Co., with a view to getting a job.

He is asked to see the manager the next day at an appointed time. The day after while going to Opera Co., he meets the doctor who had saved his sister's life and is late in reaching the Opera Company's office. The manager is on the point of turning him out, but at the requests of Rekha, a famous singer of the stage, the manager takes Ramesh in. Rekha in return falls in love with Ramesh.

Krishna comes to Calcutta and chances to see Ramesh with a lady in a car. She misunderstands and goes back. Ramesh is mortified at Krishna's conduct, He thinks, he will forget her.

Disappointed Ramesh suddenly resigns from the Opera Co., Alarm—signal blows in the city. Everything is topsy—turvy. Ramesh finds it difficult to secure a job at this crisis.

Krishna is pining at her village—home. The Zamindar feels worried. He comes to Calcutta to see Ramesh, only to find an assemblage of creditors at his place and Ramesh's sister. Ramesh was out. The Zamindar talks to the sister and tells her that she is the root of all troubles for Ramesh.

Ramesh comes back home but finds his sister missing,

The siren goes again. Calcutta is bombed. Ramesh is injured. After recovery, he is taken to his flat from the hospital. Shankar requests Ramesh to leave the city. He refuses.

A telegram from the village. Ramesh's sister is seriously ill.

Ramesh rushes to the village and finds at the Zamindar's place!

Ramesh is surprised! Does this mean a total change in the life of Ramesh? Does this mean the end of all misunderstandings between the two lovers? The screen gives the answers to all the above questions.

[from the official press booklets] 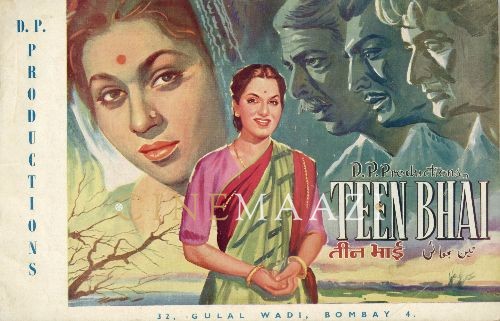