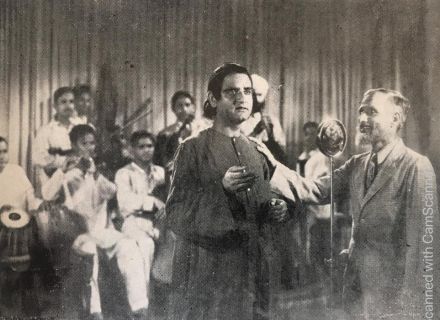 A legend in Hindi cinema in the 1930s and 1940s, K L Saigal’s musical genius well outlasted his reign in films. Bringing music to the masses, his contribution demands recognition. A phenomenon in his own lifetime, K L was idolised for his characteristic style and his voice which was a blend of baritone and soft tenor. Sans formal training, he recorded approximately 185 songs including immortal numbers such as Jab dil hi toot gaya, Diya jalao jagmag jagmag, Rumjhum rumjhum chaal tihari, Chah barbaad karegi, and Baag laga doon sajani. The Saigal era, so to speak, which lasted from 1932 to 1946 saw the actor-singer feature in memorable films such as Bhakta Surdas (1942), Kurukshetra (1945), Omar Khayyam (1946), Tadbeer (1945), and Parwana (1947). Featuring in around 36 feature films, including Street Singer (1938), Tansen (1943), and Shahjehan (1946), it was his pitch perfect portrayal of the doomed hero in Devdas (1935) that sent his popularity skyrocketing, establishing him as a superstar. His portrayal would go on to influence every actor playing a tragic hero thereafter.

Born Kundan Lal Saigal in Jammu on 11 April, 1904 to Kesardevi and Amarchand, his father was a tehsildar in the service of the Maharaja of Jammu and Kashmir. One of four sons, his interest in music was nurtured by his mother, apparently much against the wishes of her husband. The mother-son duo would often sing bhajans at religious functions. His formative years were also shaped by his association with the sufi saint, Salman Yousuf of the Yesvi sect, at whose gatherings song and music sessions were the order of the day. As a young boy, it was here that he practiced singing and held discourses with other musicians. The singing tradition he assimilated emphasised the poetic blending of the syllables of thumris and ghazals. At the tender age of 10, he took part in the Ramleela, essaying the part of Sita. In fact, the Ramleela celebrations in his area became popular due to his delightful singing.

Dropping out of school, he went on to work as a time keeper for the railways in Delhi. However, he was well aware of his ambition in life: to understand and pursue the mystery and meaning of music. Post-retirement, his father left Jammu to settle in Jalandhar along with other members of the family. Saigal too joined his father, after resigning from the railways. In order to earn his livelihood, he found employment as a salesman for Remington typewriters on a monthly salary of Rs.80. His passion remained singing; customers would apparently often ask him to sing for them, before they could look at the typewriters!

A day came when he left home without informing anyone in the family; it was the start of his wandering life. Over a span of eight years, he travelled to different places like Lahore, Kanpur, Bareilly, Moradabad, Shimla and Delhi. During this period he came in contact with Punjabi folk singers, learning about the traditional ragas integrated into the Punjabi love legends such as Waris Shah’s Heer, Sohni Mahiwal and others. He had the opportunity to listen to the leading musical greats of his time, such as Faiyaz Khan, Abdul Karim Khan, Bal Gandharva, Pandit Omkarnath Thakur, and others. Keenly observing the styles of khayal and thumri singers from the renowned gharanas of Lucknow, Benares, Agra and Gwalior, he attempted to imitate them, and perform at private gatherings.

Eventually, he was taken by a friend to Calcutta, where he was introduced to B N Sircar, the founder of New Theatres, which was the leading film studio in the city, established in 1931. It was equipped with the latest cine equipment, and also possessed the finest talent in the country including directors, music directors and actors. At the time silent films started to give way to the talkies, a gentleman by the name of Qazi Hussain invited Sircar to a social gathering, to lend a ear to the singing of the young Saigal. At the event, Sircar was accompanied by renowned film director Nitin Bose and famous music director R C Boral. Sircar was so moved by Saigal’s singing, that he immediately asked him to come over to New Theatres, and appointed him at the then considerable salary of Rs.200 per month.

Saigal started with New Theatres’ film Mohabbat Ke Aason (1932). He would enjoy a long and fruitful association with the studio; his last film with New Theatres would be My Sister also known as Meri Bahen (1944). He had acted in around 29 films made by the studio, of which eight were in Urdu, seven in Bengali, and the rest in Hindi. It was the New Theatres film Chandidas (1934) that gave him a real boost as far as music was concerned. Directed by Nitin Bose and with music by R C Boral, Saigal in the title role dominated the film. Based on the life of legendary 15th century Bengali poet Chandidas, it portrayed a socially relevant topic highlighting the evils of untouchability and caste barriers. The film propagated the theme of universal love, with the lovers discarding tradition bound by religion.

Transitioning into acting and singing in films, Saigal enjoyed a flourishing career with early films such as Zinda Laash (1932) and Mohabbat Ke Aason. He won fame for his songs such as Premnagar mein basoongi ghar main, Tadapat beeti din rain and Prem ki ho jai. His voice and onscreen charisma saw more and more offers coming his way, establishing him as one of the leading stars of the film industry.

The year 1935 saw Saigal catapulted to superstardom with the release of Devdas. The historic super hit film was directed by creative genius, P C Barua, with Saigal and Jamuna playing the leading roles. Based on Sharat Chandra’s literary masterpiece, it immortalised New Theatres, also setting a milestone in Indian cinema.

His was a naturally gifted voice, which did not need much training; the little brushing that was required was provided by music directors like Rai Chand Boral, Pankaj Kumar Mullick, and Khemchand Prakash. Minus any formal training, he cultivated his own style, which won appreciation from all. Mullick played a key role in initiating him into Bengali songs, especially with regard to Rabindra Sangeet. On one occasion, when Mullick wanted to use a famous Rabindra Sangeet in a Bengali film, director Nitin Bose was hesitant about Saigal’s capacity to render the songs. What’s more, the great poet Rabindranath Tagore was alive at the time, and was known to be very particular about these matters. Would he accept his compositions being rendered by a young Punjabi lad, that too in a film? Without informing a soul, Mullick quietly took Saigal to Shantiniketan, for a special audition with Tagore. After Tagore heard him sing, the bard simply made one comment: “What a beautiful voice you have!”

His contract with New Theatres’ was valid until the end of May, 1945. However, even before that, Sircar allowed Saigal to migrate to Bombay so that he could star in a few films made by Ranjit Movietone. He did this with the understanding that as a freelance artiste, Saigal would be able to earn more. So enamoured was Saigal of New Theatres, that he would return from Bombay to make his last film, My Sister with the studio in 1944. Directed by Hemchandra with music by Pankaj Mullick, its success was mainly attributed to Saigal’s mesmerising songs.

The mid-1930s had ushered in the era of singing stars, led by the musical genius K L Saigal. The first record brought out by the Hindustan Recording Company was the unforgettable song Jhulana jhulao. It created a sensation with its sale of five lakh copies. Saigal went on to make a contract with the recording company to sing on a royalty basis. His non-film music—ghazals, geets and bhajans—made him popular with music connoisseurs who did not frequent cinema halls. Experimenting with various forms of music, he perfected the khayal, bandish ghazals, geet, bhajan, hori and dadra in various ragas. He also sang in different languages including Hindi, Urdu, Pashto, Punjabi, Bengali and Tamil. Music was his passion; he was more like a sufi saint who found his soul in music. A poet himself, he would apparently recite his verses at private gatherings. He also penned and composed the extraordinary song Main baithi thi phuhari mein.

In his own time, he was not only the most popular singer but his voice was considered one in a million, during his prime and even after. Many budding singers modeled their careers on his singing style, voice, and pronunciation; such was his impact. The undisputed king of film music, in addition to his magnificent voice, he was a natural actor as well. His all-time hit, the haunting thumri Babul mora written by Wajid Ali Shah, the nawab of Awadh, continues to be associated with his memory as an immortal singer.

In the year 1941, he moved to Bombay and acted in Chandulal Shah’s Bhakta Surdas (1942) and Tansen (1943). These contributed to his image as a legendary tragedian. His last great hit was Shahjehan (1946). He loved Urdu poetry, and seemed to have a special love for Ghalib’s verse, singing the latter’s ghazals with complete heart and soul. Poets such as Zauk and Hasrat became famous because of Saigal’s singing of their poetry. Even his fondness for alcohol could be seen as a way to reach a state of detachment.

On the personal front, he had married Asha Rani in 1934; the couple would have three children – two daughters and a son. Saigal ensured his children were exposed to training in music, and arranged for a teacher to train them in vocals from a young age. Interestingly, he would carry toys home when returning from work in the studios; he would shut the door to his room and play with these toys himself before sharing them with his children. It was his way of making up for a childhood that didn’t include these toys.

Eventually, his addiction to alcohol sounded his death knell. The inimitable artist passed away on 18 January, 1947, aged 42, leaving behind indelible memories. In the best tribute of all, his songs are evergreen and are hummed even today. He remains memorable as the first superstar of the Hindi film industry.