Location : A village on the border;

In an isolated small village, arrives the landlord of the region with his band of solders, on his annual visit to collect revenue. It is the day of the festival of the Goddess and his arrival naturally disturbs the festive spirit of the people.

At night the village celebrates the festival with dance and music. The Landlord spots a woman called Sonbai, he desires her. She resists his advances.

Next day, when Sonbai is going to work in the local spice factory the Landlord blocks her way and invites her to his tent, promising her pleasures unknown. She resists. He grabs her. She slaps him, wrenches herself free and escapes.

The Landlord is furious. How dare a woman defy him? He commands his soldiers to capture Sonbai and bring her to him.

The soldiers chase her. She escapes and gets into the spice factory and requests the watchman to save her.

The watchman immediately comprehends the situation and with super human efforts, manages to close the giant sized gates of the Factory. Sonbai breaks down and narrates her story to the women workers. They comfort her.

The soldiers arrive and demand the woman. The watchman refuses. The soldiers threaten him but the old watchman stands firm.

The soldiers return and report to the Landlord and seek his permission to break down the gates and get the woman by force. But the Landlord has other ideas. He orders them to capture the owner of the factory.

Jiwan Seth, the local trader who owns the factory captured and brought before the Landlord. The landlord makes his demand.

The Seth tries to plead but when the landlord threatens to break open his godowns, the Seth submits immediately.

The Seth orders the watchman to open the gates.

But the watchman refused, saying that it is his function to protect the factory which includes workers and, therefore, he cannot let them take Sonbai. The women inside get scared and tense. The Seth leaves, cursing the watchman and promising to teach him a lesson.

The news spread. The rumours multiply. Soon, the entire village comes to know about the happening.

The Landlord now calls the Headman of village and threatens to burn down the village, if Sonbai is not delivered to him.

The Headman recognises the damages and calls a meeting of the village elders.

Now the entire village gets involved in the happening.

How does the village cope with the situation?

How do the villagers tackle this aggression?

That is the story of "MIRCH MASALA"! 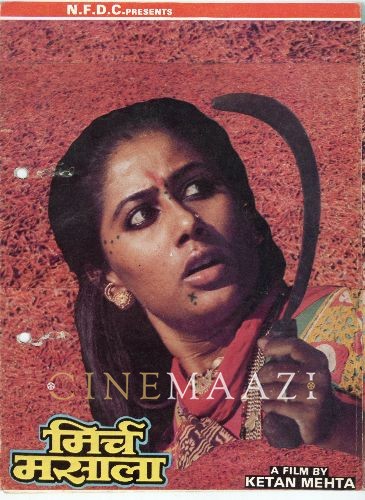