In a village, called Gupt Gaaon, a few Upper Class People ruled over a community of Backward Classes. The head of the village was a landlord called Madhukar, who ruthlessly wrote the fate of these poor people in his own way. The village school could give education to the upper class children only, and the children of the backward classes were not admitted.

But Ramu, who was born to low class parents, wanted to get educated in the same school. The school teacher encouraged him much but Madhukar was adamant and he beat Ramu once so that education should not go out of his thoughts. The school teacher, seeing the boy's favour for education, sent him to the city.

When Ramu returned to the village after education, he saw the village in worse stage than when he had left. The school was not turned into a gambling den. His mother was serving as servant in Madhukar's house, along with Chanda, a village girl used to look after Ramu's mother when he was in city.

Ramu challenged Madhukar and rebuilt the old school, asking all the children to get education in one place. He convinced then that God has created them as one community, there is no barriers no high no low, everybody was equal with equal rights. In this brave venture, Ramu was joined by Laxmi none else than Madhukar's own daughter.

Madhukar was shocked beyond measure till now nobody had challenged his authority. He arranged to get Ramu transferred from the school, but Ramu would not leave. Even the villagers were not behind Ramu seeing all this, Madhukar ordered Gangu, his henchman to kill Ramu.

Chanda the village girl, heard about this. She secretly loved Ramu but sacrificed her love by marrying Gangu, after he had promised that he will not kill Ramu.

Ramu was shocked to see Chanda married to a rowdy but Chanda did not divulge the secret to him.

On the other side, Laxmi started teaching in Ramu's new school and then love for each other and their fight for principles was the talk of the village.

Upon this scene descended Bijlee a backward girl who was once a resident of the village but had disappeared for a long time. Upon injuring Ramu came to know that she was raped by Jaggu the village money lender and a stooge of Madhukar.

The villagers were now openly talking about the love affair of Ramu and Madhukar's daughter Laxmi. They chided Ramu that though he was fighting their cause but once he married an Upper Class girl he will forget them Ramu, with faith in his ideals and moral values to show the villagers, married Bijlee, the raped girl, much to heart break of Laxmi.

The time for Panchayat election came Ramu with the help of the villagers, wanted the school teacher to stand for Serpanch's seat against Madhukar. Madhukar retaliated by fatally wounding the school teacher. Ramu took him to city for treatment and in his absence, Bijlee by force to Jaggu Chanda was accidently killed. Bijlee committed suicide.

When Ramu returned from city was faced with two dead bodies, one his wife second innocent Chanda.

Blood shot forth from his eyes fire burnt within his soul. Taking the Trisulam from the Goddess, he went in chase of Gangu and Jaggu and killed them both.

He was jailed for 15 years but Laxmi carried on his unfinished work of educating the village children and ridding it from ignorance. The new step which Ramu taken, was faithfully followed by Laxmi much to happiness of Ramu when he returned to the village after finishing his jail term. 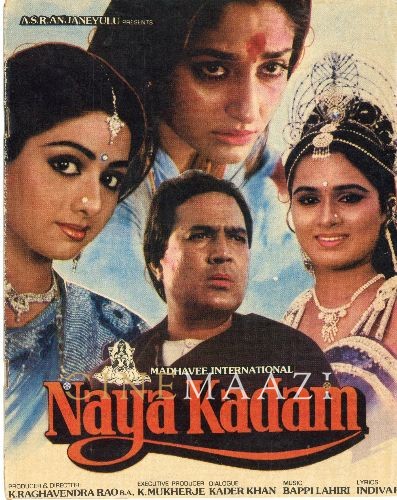