Noted actress and director known for Saranga (1961), Lav-Kush (1967) and Sampoorna Mahabharat (1983), Jayshree Gadkar acted in numerous Marathi and Hindi films in leading and supporting roles from the 1950s up until 2000. Making her debut on the Marathi silver screen in 1955 as a group dancer in V Shantaram's Jhanak Jhanak Payal Baje with leading lady Sandhya, she quickly made a name for herself. With her talent, dancing skills and beauty, there was no looking back for Gadkar as she ruled the Marathi film industry in the 60s, becoming a household name. Among her celebrated films are Aaliya Bhogasi (1957), Gath Padli Thaka Thaka (1956), Sangtye Aika (1959), Avghachi Sansar (1960), Mohityanchi Manjula (1963), Sadhi Manasa (1965), and Manini (1961). Gadkar did a few but impressive roles in Hindi cinema, most of them mythologicals, such as Saranga (1961), Tulsi Vivah (1971), Bajrang Bali (1976), Eshwar (1989), Masterji (1985), and the 80s teleserial Ramayan, in which she essayed the part of king Dasharath's first wife Kausalya, mother of Ram.

Apart from Marathi and Hindi cinema, Gadkar acted in films in Gujarati, Marwari, Punjabi, Telugu and Tamil. Over a career spanning close to half a century, she did nearly 250 films. She is also credited with writing Ashi Asavi Sasu (1996), which she also produced and directed. She also directed Sasar Maher (1994). She won the National Award for her performance in films such as Manini (1961), Sawal Mazha Aika (1964), and Sadhi Mansa (1965). Her autobiography Ashi Mi Jayshri was released some years ago.

Born 21 February, 1942 (Karwar District, Bombay Presidency, British India), she began her career as a child dance artiste. In 1954, when the then-Prime Minister of Russia was to visit Shivaji Park, Dadar, music director Vasant Desai had organized a grand function at the place and was looking for a few girls to perform at the event. At the time, Jayshree was learning dance at Shyamala Majgaonkar’s classes in Girgaum, South Bombay. She was selected for Desai’s event and performed to the hit Marathi number, Latpat latpat tuzha chalana from V Shantaram's film Amar Bhoopali (1951). Jayshree was just 12/13 at the time. This event brought Gadkar her first film. A photographer in Pune had displayed her pictures from the performance. Impressed by her photos, director Dinkar Patil offered her a role. While it wasn’t a full-fledged role of a heroine, as she desired, it included two songs with noted actor Raja Gosavi. This was how Jayshree Gadkar landed her first Marathi film, Dista Tasa Nasta (1956).

Even before this, she had appeared in a song sequence in the V Shantaram film, Jhanak Jhanak Payal Baje (1955). She was selected from her class for the film and danced in the chorus with Sandhya. Director Anant Mane's Sangatye Aika (1959) played a major role in furthering Gadkar's career. The film was a tremendous break for her, and her song Bugadi majhi sandli ga became very popular.

Solid roles began to come her way. She shot simultaneously for Ranga Panchami (1961), a film in which she played the double role of a tamasha artiste and a housewife, and Manini. Both characters in Ranga Panchami are poles apart, while in Manini, she played a Brahmin girl from Kolhapur.

Her major success as a lead actress started with Bhalji Pendharkar's Gatha Padli Thaka Thaka (1956), and Aliya Bhogasi (1957). In fact, her success as a lead actress in films with rural themes, with a background of tamasha or folk dance, is unparalleled in the history of Marathi cinema. While Sangtye Aika (1959) ran for 132 weeks in a theatre, her dance number Bugdi majhi sandli ga was a huge rage at the time and is still remembered.

Simultaneously, her song-and-dance tamasha performances in films became very popular. However, she did approximately just eight to ten films in which she played a tamasha artiste. Instead, she did far more films belonging to the social genre. While some presumed she had become popular for the Sangatye Aika song and was thus a tamasha actress, Gadkar changed the misconception with a range of performances in films like Mohityanchi Manjula, Sadhi Manasa and Manini. In fact, during the making of Manini, several industry bigwigs thought Gadkar, known for her tamasha films set against a rural background, would not be able to do justice to the role in Manini opposite veteran actor Chandrakant Gokhale. However, Gadkar silenced her critics and also bagged a National Award for her performance.

Her stint in Hindi films was brief. She acted opposite Ashok Kumar in a film called Private Secretary (1962), while her other Hindi language films included Madari (1959), Bajrang Bali (1976) and Saranga (1961).

Jayshree Gadkar was known to carefully perfect her method, observing real life persons. If she acquired perfection in tamasha by studying the artistes closely, clad in a burkha, she similarly observed real blacksmiths in the bylanes of Kolhapur for Sadhi Manasa. In Mohityanchi Manjula, she played a braveheart and performed sword fights. She also did Bhalji Pendharkar’s Sadhi Manasa, wherein none of the artistes used make-up. She thus essayed a wide range of roles in her films.

Gadkar worked in as many as 24 films with Suryakant, the Marathi actor, artist and writer from Kolhapur. She featured in 17 films with Arun Sarnaik, seven with Dr Shriram Lagoo and eight with Dhuri. What’s more, at different times she played mother, wife and love interest of Vikram Gokhale and also wife and daughter of his father, Chandrakant Gokhale.

She was best known for her roles in mythologicals. In Mata Vaishno Devi (1971), she played the titular role of Mata Vaishno Devi, while in Bhagwan Parshuram (1970) she essayed Gayatri in the Babubhai Mistri film which was based on Lord Parshuram who was the avatar of Lord Vishnu. In Datta Dharmadhikari’s Subhadra Haran (1964), which portrayed an incident from the epic Mahabharata, she played Subhadra in the episode wherein Krishna urges Arjuna to abduct his sister Subhadra and elope with her. Mahima Shri Ram (1981) saw Gadkar play Sati Bindumati in director Satish Kumar’s film, while Hari Darshan (1972) saw her essay the role of goddess Laxmi in the Chandrakant directed film which tells the story of Prahlad and also shows different avatars of Lord Vishnu. Shree Krishnarjun Yuddh (1971) saw Gadkar play Subhadra, Arjun’s wife, who convinces her husband to go against Krishna. In Balak Dhruv (1974) she played Dhruv’s mother, Suniti. Kisan Aur Bhagwan (1974) told the story of a farmer Dhanna, played by Dara Singh, who tries invoking Lord Vishnu as he is struggling to till his piece of land. It had Gadkar playing Devi Maa Lakshmi. Shravan Kumar (1984) featured Gadkar as Mata Annapurna. In Ramanand Sagar’s popular television series Ramayan (1987), she essayed the part of King Dasharath's first wife Kausalya, mother of Ram.

Jayshree Gadkar passed away on 29 August, 2008 after a brief illness. She was 68. She was survived by her husband, actor Bal Dhuri, and son Anand. 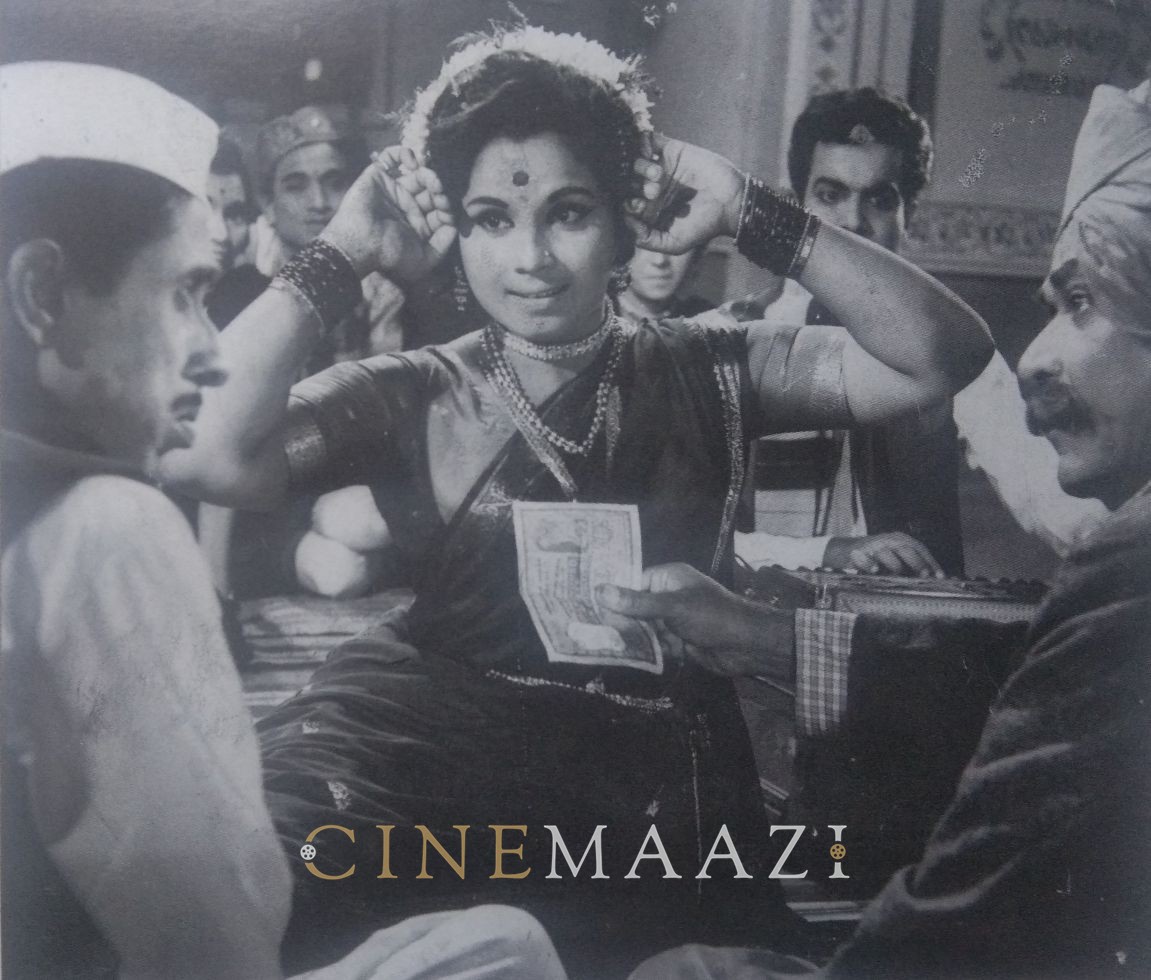