Neelam, the beauty queen of the law college is a mischievous girl by nature. She likes to take up challenges. She decides to titillate the college students during her performance on the annual day function. Though she succeeds with flying colours but unfortunately her pranks take a different dimension. A group of daredevil students loose their sense and forget the college decorum to the extent that hey kidnap Neelam in  a collective manner.

The news of kidnapping catches like a wild fire not only to that city but throughout the state cos Neelam happens to be the daughter of the minister of the state Mr. Pradhan Des Pandey. The state police department and the press are put on alert.

But Neelam is alive, though far away from the city - in a jungle. Her saviour Suraj is a self-employed law graduate who prefers the job of horse training over law practice.

Despite all much needed hospitality which Suraj has accorded to Neelam, Neelam still refuses to accept him as her saviour and doubts him to be the real kidnaper. This misgiving was enough for Neelam to sneak out of Suraj's farm cottage. But Suraj comes her rescue again in time; and becomes her saviour for the second time as she was confronted by the kidnappers again. Now Nelam has to believe Suraj, so does she. And so does she loose her heart out to Suraj.

Their love not only becomes the talk of the town but it spreads throughout the state just like the news of her kidnapping. Mr. Pradhan Desh Pandy and his son Vikram cannot accept the fact that his daughter Neelam is getting along with a commoner. Vikram, Neelam's brother decides to hit back all his plans and arguments with Neelam boomerang on Vikram when Neelam proclaims Suraj to be the love of life publicly.

Vikram cannot take this open humiliation and decides to take the revenge. Infatuated by Suraj - sister and having that attitude of - taking away Suraj sister as he thinks Suraj has wrested his sister, Vikram decides to kidnap Manisha, Suraj sister but her kidnapping turns into disaster. Due to unforeseen circumstances Vikram finds himself compelled enough to kill all other family members except Suraj who happens to be absent at the time of abduction.

Suraj comes back home. He is confronted by the dead bodies lying all around. There is no evidence except the car number of the abductor.

The number of car leads Suraj to Mumbai. By making sundry official enquiries Suraj's suspicion about Vikram gets confirmed. Suraj goes to Vikram's house to have a man-to man dialogue with him but to his surprise Vikram even refuses to recognise him and Suraj is thrown out of Vikram's house.

While in America, Neelam comes to know about her father's play to get her married and thus she immediately flies back to India. Back to her college, she comes to know about the massacre having taken place at Suraj's house, she desperately tries to look for Suraj but Suraj has left no traces behind.

Here in Mumbai, Suraj confronts Pradhan Desh Pandey in public. To avoid the embracing situation, Pradhan Desh Pandey the politician, plays it diplomatic and invites Suraj to his residence. Suraj accepts the invitation - though oblivious of the trap that he is walking in.

The next morning, the Mumbaites wake up up to an electrifying news that a terrorist (Suraj) has been captured from the Minister's residence.

The case being a sensitive one, is handed over to the most dynamic efficient and honest police inspector - Inspector Nanak. Inspector Nanak incidently happens to tbe the same inspector who was given the charge of rescuing Neelam from the kidnappers and is therefore well aware of the love between Suraj and Neelam and realises that Suraj been falsely implicated as a terrorist by Pradhan Desh Pandey to get rid of him. He helps the innocent Suraj in getting freed from the jail.

With the help of Suman (Nanak's sister), Suraj succeeds in picking up one of Vikram's crony who after having been hammered properly admits that Manisha was unable to endure the rape attempt of Vikram and committed suicide.

"An eye for an eye" and "A tooth for a tooth" Suraj decides instinctively.

With his family destroyed and his dreams shattered Suraj sees REVENGE as his sole purpose of his life. He kills the culprits and finds his love Neelam in his arms. 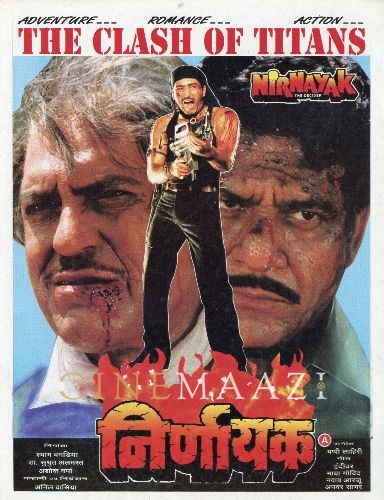