It is time that with Rajyog you can rule people, but not their hearts. Today in the world of hatred the only solution lies in PREMYOG.

Premyog is one such film which starts from a palace and with interesting incidents ends up in circles of firing which you will be viewing for the first time.

On reaching Bombay he starts working as on ordinary waiter in a restaurant, while living in an ordinary basti. In the basti one Lehna Singh (Joginder) who runs a desi liquor bar is a curse to the people of basti. Yuvraj puts Lehna Singh on the right track by forcing him to close the desi liquor bar. Because of this act and his goodness he starts ruling the heart of people of basti. They start calling him Rajoo with love.

The hotel Rajoo is working belongs to Sethi (Prem Chopra) whose daughter Anita (Madhoo) is working for rehabilitation of drug addicts, Rajoo starts helping her in this good work. Anit's one and only weakness is she hates people who lie. Rajoo hiding his identity starts sending love letters to Anita as one of her well-wishers.

The story takes a twist as Sethi wants Anita to get married Jimmy (Mohnish Behl) son of Narang (Tej Sapru). Anita is dead against this marriage as she realises she has fallen in love with waiter Rajoo. Insulted Jimmy buys the land on which Anita's Drug rehabilitation centre is built and threaten to get it vacated or else she pays rupees five lakhs for it.

Under pressure her father Sethi refuses to help her.

Seeing Anita's worried Rajoo decides to sell the precious diamonds of his ancestor which were accidentally brought by him to Bombay due to this Narang came to know that Rajoo waiter is the real Yuvraj this discloses to Anita.

What happens then? Watch it in the theatre. Does Rajoo get Anita?  Does Rajoo go back to the palace? Does Maharaj Chattarpal Singh starts believing that Premyog is the solution and not the Rajyog in today's world of hatred. 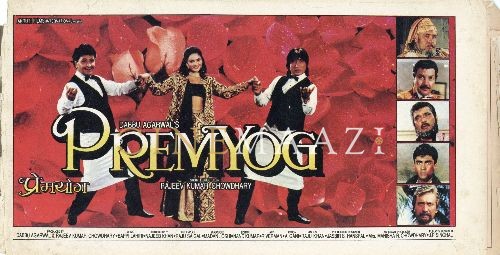