ONE who drinks nector becomes immortal - this dictum may be true or untrue, but the fact remains that one who sacrifices for others, surely gets a world-wide fame. King Vikram was known for his valour and charitable disposition. His name had spread throughout the length and breadth of the country.

But Mukund - a brahmin from Pali village put an allegation on him that his son (Mukund's) died only because he saw king Vikram's face. King Vikram was struck with wonder and grief. He promised the brahmin that exactly after a month on the full moon-day he will bring nector and make his son alive.

The very day king Vikram leaving all his army behind left for Mayanagari. The king of Mayanagari Jeemutwahan was not only inconvincible but also he cherished a desire in his heart to become immortal. He had arranged a sacrificial ceremony for the purpose. Due to enmity he had turned the son of Nagraj the king of Pataal into a serpent and filled his stomach with fire, king Vikram decided to snatch away nector from such a strong and cruel king.

It was a well-known fact that Gangu the oilman of Chandranagar wanted to marry Meenakshi the elder princess. Being mad in love he wandered throughout and started envying and cursing king Vikram because the princess Meenakshi had taken king Vikram as her husband even without seeing him. She was by nature an ambitious girl and held that by effort one can achieve anything.

The younger princess Ratnavali was innocent and liberal minded. She had a firm faith in Fortune. One day both the sisters entered into a hot discussion over the supremacy between Fortune and Industry.

The king Chandraketu also sided with the elder princess. But seeing the tough resistance offered by the younger one the king was so much annoyed that he arranged Ratnavali's marriage with a drunkard and a poisonous beggar. The beggar was none but king Vikram himself. Chandraketu's anger was not over as yet, he further went to the extent of throwing the beggar husband of Ratnavali into the sea.

Being a loyal wife Ratnavali also jumped into the sea. But Jeemutwahan by his sheer power of Maya brought her back to the palace. He wanted to marry that beautiful damsel after getting immortality.

King Vikram fell in Pataal, the kingdom of Nagraj.
To-day is the day of full-moon. The moment nector pot was brought-out from the 'Havan-kund' king Vikram swiftly held it and Ratna was united with her husband. Nagraj came to the rescue of king Vikram with a very huge army with him. With Nagraj also came his daughter whom king Vikram had saved once in the jungle from the clutches of Jeemutwahan and had won her love. A fierce battle was fought Jeemutwahan was killed. Victorious king Vikram left Pali village in the air plane taking the nector pot, Nagkanya and Ratna with him.

Gangu the oilman in the meanwhile married Meenaksi in the disguise of king Vikram. But the secret was ultimately revealed. It hurt Meenakshi so much that she could not bear it any longer and committed suicide. There prevailed a great anarchy in the city. The king after getting down from the plane with Nagkanya and Ratna heard the news and hurried to the palace.

Ratnavali's grief knew no bounds. She asked king Vikram to make her sister alive first because he was responsible for her death. King Vikram immediately poured all the nector in Meenakshi's mouth and brought her back to life. But what about the promise which king Vikram had given to the brahmin? How his son was brought back to life without nector? 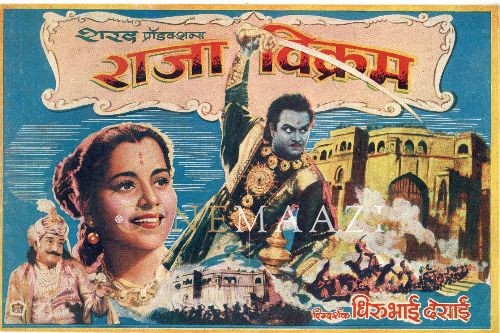