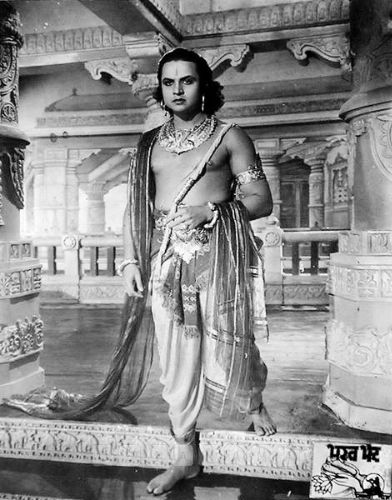 A film genre perhaps unique to India, the mythological played a formative role in the early development of the art form on the subcontinent. Among the many stalwarts who enriched the genre with their ground-breaking creativity and industry, Shahu Modak stands apart. An iconic actor in the mythological genre, there was hardly a role from the Mahabharata or the Ramayana he did not essay onscreen. Equally prolific in Hindi and Marathi cinema, he became synonymous with the image of Krishna in Indian cinema, portraying the deity as many as 29 times in his career.

Belying his claim to fame, Modak himself was born on 25 April 1918 into a Christian family in Ahmednagar. In 1932, Bhalji Pendharkar had started work on a film depicting Krishna’s childhood and was on the lookout for a young actor. The famous thespian Bhaurao Datare was acquainted with Shahu Modak’s family and suggested him for the role. Since the boy’s family were Christians, he doubted if Shahu would be allowed to play the character. When Bhalji Pendharkar, Nanasaheb Sarpotdar and Dadasaheb Torne visited Modak’s family in Ahmednagar, he impressed them with a stirring performance of Deenanath Mangeshkar. Bhalji’s mind was made up. With his father’s blessing, the young Shahu was cast in his first film.

The film Shyam Sundar (1932) became a roaring success, one of the first talkies to achieve a silver jubilee. The film also introduced another great of Marathi cinema, Shanta Apte. Shahu Modak also sang all eight songs in the film. He followed up this hit with a double role in Master Vithal’s Aut Ghatkecha Raja/ Awara Shahzada (1933) (reportedly the first double role in Indian cinema). In the following years he worked with other legendary directors like Premankur Atorthy (Hind Mahila, 1936), Nanubhai Vakil (Nand Ka Lala, Seva Sadan, Radha Mohan, 1934) and Gajanan Jagirdar (Honhar, 1936). He did not limit himself to mythological roles only, appearing in K Narayan Kale’s Mazha Mulga (1938). His willingness to experiment landed him his next major role in V Shantaram’s Aadmi / Manoos (1939).  The film was a critical and commercial success. It became a star making film for Shanta Hublikar. Shahu Modak arguably played one of the earliest roles of a policeman in Indian cinema and his restrained performance earned universal praise. But the film that made him a household name was Sant Dnyaneshwar (1940). Part of the acclaimed saint trilogy of films by Damle-Fattelal, Modak injected such pathos in the role that he subsequently became the go-to actor for all saintly characters. Years later, he would still be recognized by people as Sant Dnyaneshwar.

In the next phase of his career Modak cemented his legacy as one of the greatest actors in the mythological and historical genre. But he also stepped out of his comfort zone to portray complex characters in films like Pahili Mangalagaur (1942) and Begunah (1937). Even in films that otherwise failed to impress like Maharathi Karna (1944), Modak was hailed as the standout performer. He became a favourite of producers like Dhirubhai Desai, Vijay Bhatt and V M Vyas, starring in films like Sant Namdev (1949), Astik (1956), Narsi Bhagat (1957), Gopichand (1958), Sant Gyaneshwar (1964), Sant Tukaram (1965) and Sant Tulsidas (1972). His prowess at playing devotional roles was such that in Mee Tulas Tuzjhya Angani (1955) he played as many as seven characters from the Ramayana alone. He also starred in milestone films of the genre like Bharat Milap (1942) and Maya Bazaar (1949).

Shahu Modak was a devout follower of Swami Viivekananda and also a known astrologer. His wife Pratibha Modak had been a Jain sadhvi earlier in her life. According to her, Modak had accurately predicted the date of his death. After he passed away on 11 May 1993, the Manoos Award was started by Pratibha Modak in his honour. Pratibha Modak also served as a member of the Central Board of Film certification from 1993-94. One of the most influential figures in the history of mythologicals and later the B film circuit, no one could portray the quiet strength of unshakable faith like Shahu Modak did on screen.