Malwapati Maharaj Bharathari the sweet and sacred name that enchants a realm of memory.

Bharat knew him as a great king of his time, second to none, but for his literary achievements, unparalleled love for his people, and character he is known the world-over, even today.

He was Poetical in every walk of his Life. As a man he was so simple and true - just as a child. He has destined to this world as a guide to a man in all phases of life for ages to come. His life was Dynamic and through his pen he engraved the mark of Destiny, experimenting on his life.

Raja Bharathari famed as a great king so loved by his people, began writing an epic SHRINGAR SHATAK to get inspirations he went round his Kingdom and at a camp he got in contact of a Dancer Kalavati.

She was appointed as Court Songstress. Enchanted by the beauty of the Sindhu Princess Pingala, he got her married. The King got engrossed so deep in the love of the Queen that he forgot his duties even and forgot his people whom he so loved. In trying to expose Love and Beauty while writing SHRINGAR SHATAK by his mighty pen - he lost himself, he lost himself in Love and Beauty of the Queen Pingala degrading himself for the deep fall, lowering himself as a cheap man and getting out of his duty as a had king.

And Evolution came - Kalavati who getting the favour of the King of Malwa disregarded the love of a man who really loved her and cared her. He was Janardan. Janardan in trace of Kalawati came to Malwa finding his fiencee in the grip (?) of the king became blunt and sharp, became too mischievious to take a revenge from the King of Malwa. The King eclipsed his Kalawati, he got into contact of a Kapali and thru him trapped the Queen as Ashwapal (a horse keeper). The Ashwapal ruled over the Queen, ruled over the chiefs of the state, and began to play a hell. The Queen got demoralised. And a day came when everything came to the knowledge of the King. The King who was so mad of the love of the Queen - got shattered that the Queen loves an Ashwapal - revolutionised the whole rest of life of the great writer and philosopher of LOVE and BEAUTY.

Is it the World in its truth? Is it the reply of a LOVE? Rocked him to a crash - the King relinquished his kingly life and fall on the feet of the Guru Machinder Nath.

In presenting the dramatic life of Raja Bharathari - popular since centuries - this legend is put anew on the Screen with new colour and form but without changing the life and soul of the history to your most liking. 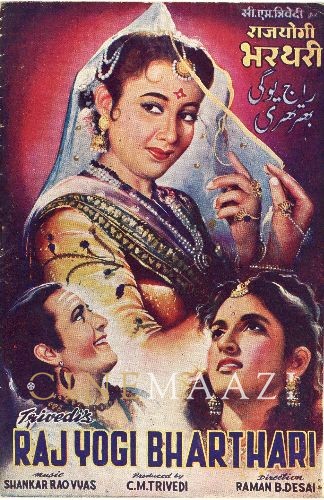