During the decades of the Fourteenth century when Tantraism was prevailing all over Bengal, particularly Birbhoom District also could not be spared from its gripping influence.

Tantraism had a hypnotic effect on the people of the villages of Bakreshwar, Tarapith, Labhapur & Nanoor in the District of Birbhoom of Bengal with the result that they followed blindly. A royal descendant Zemindar Harballav Rai of Nanur and his satellites pinned their faith in Tantraism. Tantraism had typical features such as NISIR DAAK, (the Transmission of life from one to another) CHILD SACRIFICE and attaining Shakti (Supernatural power) through the worship of Virgins.

Tantrik Roop Chand at that time with his disciples was stationed at Tarapith. Nitya Sundari of Bankura had also lost her son by being sacrificed at the altar of Tantraism. Her husband set out in search of his son but alas! he himself was never found. With this misery and affliction she went insane. With the pangs in her heart she aimlessly wandered through jungles and villages. During her traversing, she happened to reach Gopal Temple at Saltora. In an outburst of emotion and frustration she fully relinquished herself to Gopal, who gave a soothing balm to her afflicted wounds. The same insane Nitya one day became the famous NITYA DEBI and was being worshipped by the people as their Mother.

Birsingh, the Maharaja of Birbhoom always used to get still-born child. The Tantra of Tantrik Roopchand failed to give the queen a living Child. Ultimately Birsingh had to take shelter of Nitya Debi. The devotional face of Nitya Debi converted Birsingh to a stern Vaishnava. He renovated the ruins of the Temple of Saltora to a big marble temple of Nave-Brindaban. What then! there ensured a strife between the two sects, Vaishnavas and the Tantriks.

Rami was a washerwoman by caste and was widowed in her childhood. She was a resident of Village Tehai situated in between Bankura nd Birbhum. Being tormented by the vultures of sex she also took shelter of Nitya Debi. Nitya Devi perceiving the awakening of Radha Shakti in Rami's heart, she ordered her to go to Chandidas, the worshipper of Basuli, the Goddess of Learning at Nanur. At that period of Tantra, who cared to worship Bageshwari? This is one of the reasons why the temple of Basuli Devi was in ruins. He used to write lyrics in praise of RADHA KRISHNA by sitting in the shadow of ruins.

Bhabanicharan Rai, the father of Chandidas was a staunch Tantrik, he made Nakul his youngest son the Puraji of Shyama Temple, but Chandidas though being a Brahmachari since his Childhood could not follow Tantraism. In the meantime Rami Dhoban appeared at Nanur. The Zamindar Harballav Rai fell prey to her youth and beauty and he offered her a job of sweeping the Shyama Temple and made arrangements of her boarding and lodging at Gobardhan's place. Gobardhan's wife Parvati became a chum of Rami. The river has a tendency to meet with the Ocean. Rami met Chandidas. Chandidas became Poet Chandidas. He found his Radha in the form of Rami and he lost himself in the heart of Rami and Rami in Chandidas.

The strict rules of Society and that of Trantraism stood as a mountainous barrier in between them. Zamindar Harballav vehemently opposed and the sword of Tantra stood against their free and open meetings. But! Who was the Target? CHANDIDAS or RAMI ?

You will see this on the silver screen. 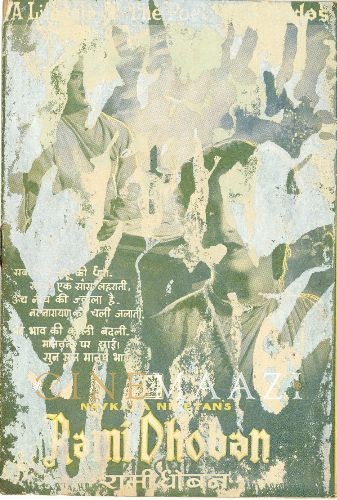